In other business, Town Board members suggested Cold Spring and Philipstown consolidate their highway departments.

The board also honored the Garrison Volunteer Ambulance Corps, which won the Putnam County Emergency Services Agency of the Year Award.

Shea said the state planned to close the entrances to the mountain “until they get a handle on things.” During the closure, the Metro-North train will no longer stop at Breakneck, and “the whole area is going to be closed,” he said.

On Monday (Sept. 11), regional park staff referred questions about the duration of the closure to Albany, where higher-ups did not immediately respond.

Along with temporarily closing Breakneck, park authorities plan “to educate people and disperse them into the other 60 or 70 square miles of parkland,” create a park-and-ride lot on the Taconic Parkway with shuttles to the state parks, and ferry visitors from the Cold Spring train station to parks, Shea said. Philipstown contains sections of both Hudson Highlands and Fahnestock state parks. 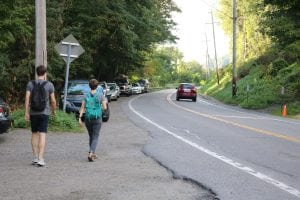 Parking will be prohibited on the east side of Rte 9D just north of Little Stony Point Park. (Photo by Michael Turton)

“We have other hikes that are just as nice” as the trek up Breakneck, said Barbara Scuccimarra, who represents Philipstown in the Putnam County Legislature. “This is a beautiful spot we live in and people want to come. I can’t blame them.”

Scuccimara said she has met with county transportation manager Vinny Tamagna and Linda Cooper, director of the park system’s Taconic Region, to discuss using the county-operated green trolleys for the    planned runs between the Cold Spring station and parks, starting in the spring.

County, town and state officials intend to meet in Philipstown on Tuesday, Sept. 19, to discuss Breakneck, which attracts more than a thousand visitors a day on summer weekends and crowds the two-lane Route 9D with parked vehicles.

Shea remarked that the Philipstown Highway Department, based on Fishkill Road in Nelsonville, needs an updated building, and that the garage itself is “an eyesore.”

Councilor Nancy Montgomery proposed they think in broader terms. “Are we ever ready to have a conversation about consolidation with the Cold Spring Highway Department?” she asked, adding that state funding exists for evaluating and implementing municipal consolidations.

Conceding that consolidation frequently “is a scary word,” Montgomery said that less drastic-sounding options include sharing services, “which we already do,” and having a common headquarters. 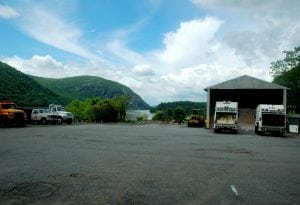 A view of the Hudson in 2011 from the Cold Spring Highway Department garage on Fair Street (Photo by L.S. Armstrong)

“It’s a great idea,” Shea responded. He noted the merger this summer of the village and town building departments went well and that a joint highway operation could reduce overhead costs while preserving employment levels.

“We’re not talking about getting rid of any positions,” he said. “We’d still need the people to work” on both village streets and town roads.

Shea suggested a merger could free up valuable real estate: a picturesque bluff, overlooking the Hudson, now occupied by the Cold Spring garage.

“I just don’t see that as the highest and best use of that property,” he said. “It’s a beautiful waterfront piece” that could possibly be a park, he said; other board members concurred. The Cold Spring Comprehensive Plan recommends the same and also endorses use of a common facility.

16 thoughts on “Breakneck to Close for Repairs”