In one of his trademark routines, George Carlin ranted that “all life is about is trying to find a place for your stuff,” pointing out that an entire industry is dedicated to keeping an eye on people’s stuff. (After his death in 2008, Carlin’s stuff was donated to the National Comedy Center in Jamestown, New York.)

That industry is known as “self storage,” and it’s booming. Case in point: the conversion of the former Southern Dutchess Bowl on Route 52 in Beacon into the latest facility in the Guardian chain, its 14th in Dutchess, Orange and Ulster counties.

The facility’s general manager, Judy Motter, notes that the industry is relatively young; it began in Texas in the late 1960s. During her 31 years in the business, Motter says she has seen the number of facilities at least double. There are now more than 44,000 in the U.S. that feed a $37.5 billion industry.

Guardian’s latest facility is temperature-controlled and features ceilings at least 10 feet high. Unit sizes range from 5-by-5-feet for $79 per month to 10-by-30-feet for about $300. “You can put a lot of stuff in that!” Motter says. 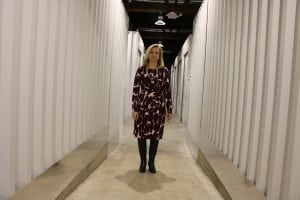 Judy Motter has worked in the self-storage industry for 31 years. (Photo by M. Turton)

Although most Guardian customers are homeowners, she says businesses sometimes rent space because it can cost less than what they are paying in rent.

When asked what most people store, Motter responds with her own question: “If you needed storage, what would you put in it?”

The answer is soup to nuts. Rentals rise and fall with the economy, she says. “When the economy is good, we have more things we want to hold on to.”

A mythology has arisen around self-storage units, fueled by cable shows such as Storage Wars, in which the contents of abandoned units are auctioned, sight unseen, full of treasures to be discovered. (In 2012 one of the show’s former stars claimed the auctions were staged and valuable items planted.)

In reality, most units are filled with “vacuums, couches, mattresses” and other household items you’d expect to find when people are downsizing or moving, Motter says. “They’re not storing John Lennon’s handwritten music notes!” The most unusual item she ever discovered was a 10-foot-tall Santa Claus. 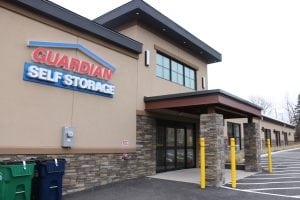 Nevertheless, there is the occasional high-profile find. After a woman named Vivian Maier died in 2009, the contents of her storage unit were auctioned and included tens of thousands of unpublished prints and negatives depicting life in New York City and Chicago in the 1950s through 1970s. Maier is now considered one of America’s most accomplished street photographers.

When it’s time to empty an abandoned unit, Motter says an auctioneer is called, the lock is cut and the contents photographed. Bidders are allowed to stand at the entrance but can’t go inside. The contents are sold in bulk, as is.

Could you live in a self-storage unit, such as the couple did in the 2010 romantic comedy series Self Storage when they ran out of money? Motter says there’s no way, at least at Guardian. For starters, an employee checks the lock on each unit at least once a day.

In March, Motter will travel to Orlando, Florida, for the annual three-day conference and trade show hosted by the Self Storage Association. The keynote speaker will be astronaut Mark Kelly, the husband of former U.S. Rep. Gabrielle Giffords.

The industry trends that will be discussed include multi-story storage buildings that are typically found in urban areas due to the cost of real estate; wine-storage units in the Finger Lakes and Napa Valley; and art-storage units popular outside major cities, such as in Westchester County.