A 17-year-old Haldane student faces a felony charge after being accused of damaging the Butterfield Library book-return box and a basketball hoop on Kemble Avenue in Cold Spring.

The Philipstown resident appeared on April 11 before Judge Thomas Costello in Cold Spring Justice Court. He faces a felony as well as a misdemeanor charge of criminal mischief. Although identified in court, he is not being named by The Current because he is a minor.

“I’m tempted to set bail and put you in jail for a while to give you a bit of a wake-up call,” Costello said. “I would not hesitate to put a 17-year-old in jail. However, it’s important that you continue to attend school.” 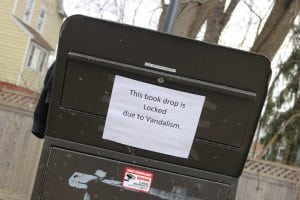 The book-return box was damaged when a vandal tipped it over. (Photo by M. Turton)

Patricia Rau, an assistant district attorney for Putnam County, recommended that the suspect be released on his own recognizance due to his age, the fact that he cooperated with police and that he appeared in court accompanied by his mother and grandfather.

Costello granted the request but said: “You are responsible for your actions, not your mother or your grandfather. Do not get in any more trouble.

“I understand that you are possibly the only one responsible,” the judge said. “I find that hard to believe, but that is the rumor. If that is the case, it all falls on you. You will have to make restitution.”

Gillian Thorpe, director of the Butterfield Library, said the book-return box is no longer functional. If it cannot be repaired, she said, a replacement will cost $3,500.

The investigation into the vandalism, which was led by Putnam County Sheriff’s Investigator Paul Piazza, was aided by surveillance video from the library, Cold Spring Village Hall and a number of Main Street businesses.

The teenager is scheduled to return to court on May 9. He was represented by Poughkeepsie attorney Steve Patterson but will seek assistance from Putnam County Legal Aid.