Philipstown Supervisor Richard Shea on Aug. 2 confirmed that the town had received an offer from Homeland Towers and Verizon to settle a lawsuit the firms brought against the town for rejecting their plans to construct a cell tower near the intersection of Routes 9 and 301.

Residents who oppose the tower mentioned the settlement offer in a four-page letter presented to the board at its formal monthly meeting. They called the proposal “vaguely worded” and noted it “still includes building a cell tower” on a site proposed off Vineyard Road.

Shea verified the news of an offer but said the board had taken no action. He said a straw poll of the five members showed that “we weren’t inclined” to accept it.

Shea characterized the offer as “confused.” He said it appeared to conflate Philipstown with Nelsonville, which Homeland Towers and Verizon have also sued for rejecting a cell tower, on Rockledge Road. The offer to the Town Board reiterated the companies’ arguments for the tower, Shea said, and “seemed somewhat sloppily thrown together. We’re asking for some clarity.” 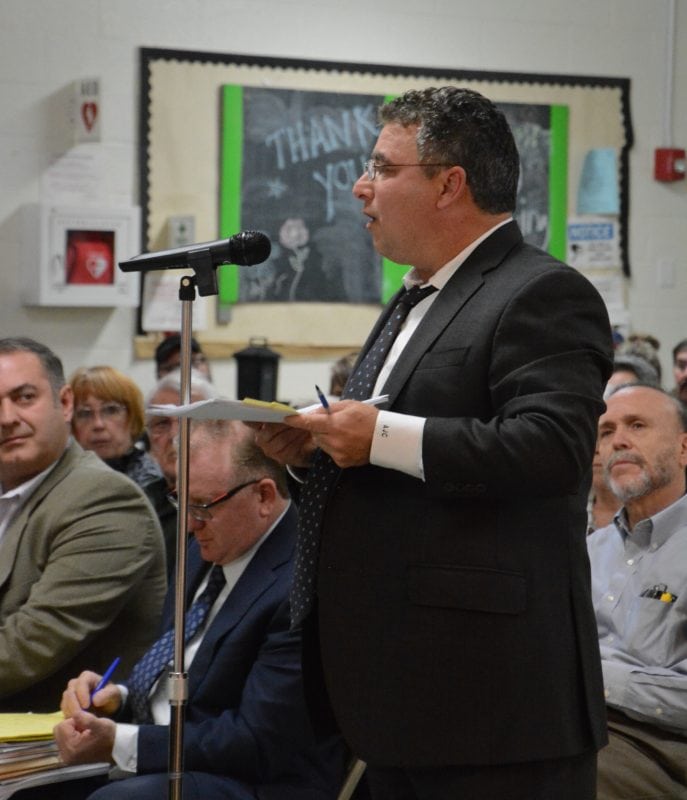 A conference between the two parties has been scheduled for Aug. 30 in the U.S. District Court for the Southern District of New York, where the suit was filed in February. It names the Town Board; the Zoning Board of Appeals; the Conservation Board; Greg Wunner, the code enforcement officer; and Max Garfinkle, the wetlands inspector. The ZBA and Conservation Board had each denied permits for the project.

The proposal generated intense opposition from those living near the site as well as from others skeptical of the need for another wireless tower in Philipstown, which has several.

In their letter, the residents pleaded for the town to include an attorney they have retained, Andrew Campanelli, in the defense of the lawsuit. (The town’s insurance company assigned Terry Rice, a lawyer based in Suffern, to the case.)

“We believe the town’s interests are entirely consistent with our group’s,” said a spokesperson for the residents, Roger Gorevic.

Gorevic told the board that Campanelli, who specializes in telecommunications law, had filed a court motion to be allowed to intervene in the case. However, he said, as of Aug. 2, Rice had not responded to Campanelli’s efforts to reach him, or to their offer to provide technical assistance. (Before the ZBA and Conservation Board decisions, the group compiled extensive data to underpin its arguments.)

Shea promised to urge Rice to collaborate with Campanelli. “It’s good to pool our resources” and the group definitely “could support the town’s position, which is everybody’s position,” he said.

In an update on Monday (Aug. 6), Shea said he spoke with Rice on Aug. 3 and that he, Rice and Campanelli planned to have a conference call before the end of the week.

In other business Aug. 2, the Town Board unanimously endorsed proposals being considered by Putnam County to raise the legal age to buy tobacco products to 21 from 18 and to ban “vape shops” that sell e-cigarettes, which turn liquid containing nicotine into inhalable vapor. Both initiatives have been championed by Barbara Scuccimarra, who represents Philipstown in the County Legislature and chairs its health committee.

In June the Town Board unanimously passed a six-month moratorium on vape shops to give it time to write a law banning them. However, the Cold Spring Village Board declined to endorse the county proposal.

The Town Board resolution declares that Philipstown recognizes that preventing tobacco use and vaping by young people “must be a priority.”