A home under construction in Nelsonville and owned by a Jewish resident was vandalized overnight on Oct. 30 with graffiti that included a swastika and an anti-Semitic slur. 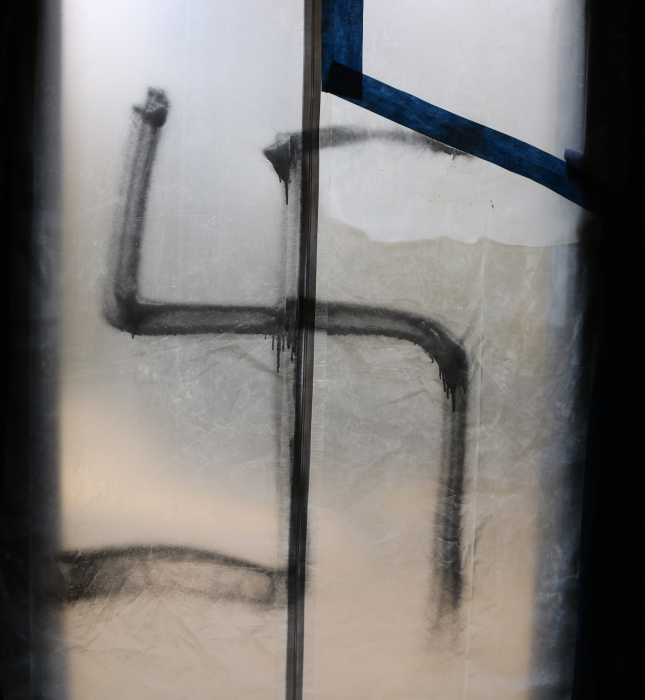 A swastika was painted on the inside of a window in the home. (Photo by M. Turton)

The contractor, who is also of Jewish heritage, alerted The Current on Wednesday morning after discovering the damage. The property owner asked that his name and the address of the property be withheld because of concerns for the safety of his family. But he said the incident “gives members of the community an opportunity to stand on the right side of history.”

The Putnam County Sheriff’s Office said it is investigating the vandalism, which was made with black spray paint and also included obscenities and the word “Prowler.” A representative for the sheriff’s office said that if it’s deemed a hate crime, criminal mischief charges could be elevated from a misdemeanor to a felony or from a lower to a higher-level felony, depending on the extent of damages.

Putnam County Executive MaryEllen Odell and Sheriff Robert Langley Jr. released a joint statement, saying: “We have met regarding the hateful incident in Nelsonville. We are working together to make sure all resources are being deployed to apprehend those responsible for this heinous and shameful act. We stand with the good people of this great county who believe hatred and violence against neighbors will not be tolerated in Putnam County.”

On Thursday (Nov. 1), Supervisor Richard Shea halted the Philipstown Town Board’s monthly meeting in mid-session for a moment of silence to recognize the 11 people killed at a Pittsburgh synagogue on Oct. 27 and protest other recent acts of violence.

“Last week was a horrible week in this country,” he said. “There’s no explaining it. The rhetoric really does have to be toned down,” noting that “the hate that is out there” hit close to home, “visiting this town” in the defacing of the Nelsonville property. “My wife is Jewish; my son is Jewish. It’s a topic of conversation at our house.”

The vandalism came about a month after an anti-Semitic flier was hung at two Beacon churches. In response, the Beacon Hebrew Alliance and the First Presbyterian Church of Beacon organized a gathering on Thursday (Nov. 1) at Salem Tabernacle, a non-denominational Christian church, of “all people of faith and good conscience … for an evening of breaking bread and singing together.”

The same flier was posted in Poughkeepsie at Marist College, Vassar College and Dutchess Community College. A man caught hanging fliers on Oct. 8 at Marist was barred from all three campuses. Poughkeepsie police handled the incident but did not release the man’s name or charge him with a crime, saying the fliers did not appear to violate state hate-crime laws. Beacon police reached the same conclusion.

There have been increasing reports of anti-Semitic incidents around the country, according to the Anti-Defamation League. The ADL said it recorded nearly 2,000 incidents in 2017, ranging from assaults and distribution of hate literature to vandalism and bomb threats, including 380 incidents in New York. The largest increase nationally was in vandalism. 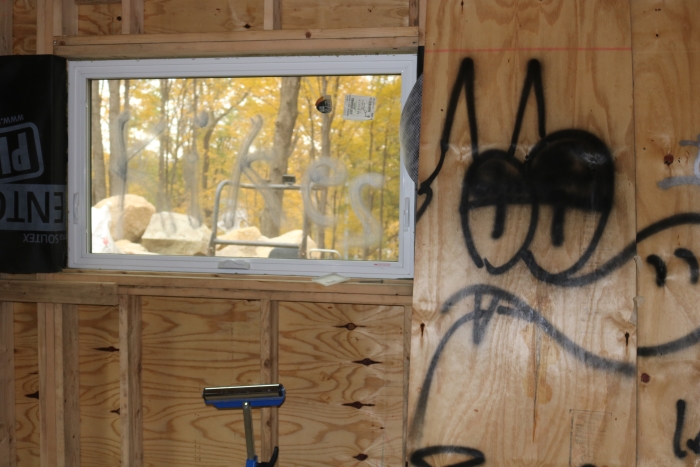 An anti-Semitic slur was painted on a window inside the home. (Photo by M. Turton)

More recently, a study of 7.5 million recent Twitter posts and 8.2 million hashtags by the ADL found a “marked rise in the number of online attacks” against Jews ahead of Election Day.

Rabbi Brent Spodek of the Beacon Hebrew Alliance said he felt it was important for the media to cover anti-Semitic acts but that the focus should not be on whether the suspects are caught. The more important question, he said, is: “Where do average people in Nelsonville, Beacon and America stand in these moments of fear?” When hate crimes occur, he said, “there is no neutral.”

In an email, Nelsonville Mayor Bill O’Neill wrote: “This hateful vandalism is outrageous and heartbreaking.” He noted that village residents have expressed revulsion over the incident as well as “support for our neighbors who have been subjected to this mindless act.” In a statement, Putnam County Legislator Barbara Scuccimarra, who represents Philipstown, called the vandalism “a cowardly act” that “is not part of the fabric of the people we call neighbors, friends and family.”

U.S. Rep. Sean Patrick Maloney, whose district includes Nelsonville and who lives in Philipstown, said in a statement: “This took place within eyesight of my kids’ school, where good people from all walks of life bring our kids to learn tolerance and respect.” He said “hate has no home” in Philipstown, “and the light of good people coming together will expose it.”