While leading the morning service on Sunday (Oct. 7) at First Presbyterian Church in Beacon, the Rev. Ben Larson-Wolbrink held up two fliers.

The first promoted One Great Hour of Sharing, an annual event in which Presbyterian churches collect funds for disaster victims.

The second was a poster stuck on the church that morning. It promoted The Daily Stormer, a neo-Nazi website, and suggested that opposition to the confirmation of Brett Kavanaugh to the U.S. Supreme Court was the result of a Jewish conspiracy. “Every time some anti-white, anti-American, anti-freedom event takes place, you look at it, and it’s Jews behind it,” it stated. 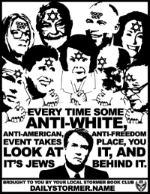 This anti-Semitic flier was posted on two churches in Beacon.

The anti-Semitic flier featured caricatures of Jewish lawmakers with Stars of David on their foreheads, including Sen. Chuck Schumer, who represents New York in the U.S. Senate. It also depicted financier George Soros, whom Sen. Charles Grassley of Iowa and President Donald Trump have suggested secretly funded the Kavanaugh opposition, and Christine Blasey Ford, who testified that Kavanaugh had sexually assaulted her; for her, it was paired with the phrase “Good Goy.”

One of the two fliers, Larson-Wolbrink told his congregation, was consistent with Jesus’ teachings to love and serve each other. The other was not.

The congregation responded with a hearty “Amen.”

“That’s something Presbyterians really don’t do,” the pastor said, in regard to the communal outburst.

First Presbyterian was not the only place in the Hudson Valley where the fliers showed up. They also appeared at Oasis (formerly Salem Tabernacle Church) in Beacon and in Poughkeepsie on the campuses of Vassar, Dutchess Community College and Marist. Distributed online, Daily Stormer fliers are routinely posted around the country. In the past month they have been found at two University of California campuses, synagogues in the San Francisco Bay Area, a Planned Parenthood clinic in Iowa and a Methodist church outside Detroit.

The posters say they are sponsored by “your local Stormer book club,” which the Anti-Defamation League says refers to “small crews of young white men who follow and support Andrew Anglin,” the owner of the website.

At Marist on Monday (Oct. 8), security personnel confronted an individual who was hanging the fliers. A faculty member called after seeing a flier about the same time a student reported that a man wearing a hooded sweatshirt and rubber gloves was hanging one. 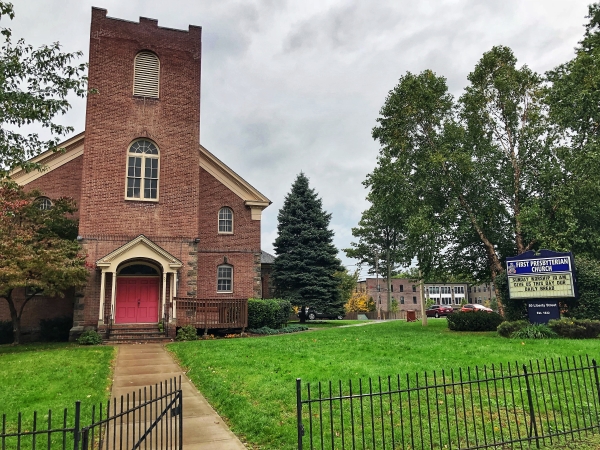 The rubber gloves made the person easy to find. According to John Blaisdell, the director of safety and security at Marist, the man told them that he was trying “to educate the community.” Blaisdell said the individual was a Dutchess County resident but not a student or staff member at any of the three schools.

Poughkeepsie police, which handled the incident, have not released the man’s name or charged him with a crime, noting that the fliers do not appear to violate state hate-crime laws. Detective Sergeant Jason Johnson of the Beacon police, who is investigating, said “neither the wording in the flyers nor the illustrations met the requirements” of the law.

A state guide to its hate-crime laws cites hanging a noose to symbolize lynching or painting a Nazi swastika as possible violations. The Daily Stormer’s logo, which contains a swastika, does not appear on the flier.

Trespassing is a crime, however, and Johnson urged businesses to post No Trespassing signs. “If the suspect is identified, advised not to return and they do so again, then a trespass charge would be appropriate,” he said.

In Poughkeepsie, Blaisdell said the man has been banned from the Marist, Vassar and Dutchess Community College campuses, under threat of arrest. “He is not welcome here,” said Blaisdell.

Town of Poughkeepsie Police Capt. Kevin Faber said it’s not clear if the individual confronted at Marist is the same person who hung fliers at other Poughkeepsie locations or in Beacon.

Public condemnation of the flier in Beacon was swift. In a statement, Mayor Randy Casale said “hate has no place in our community, which is proudly a home to all faiths and backgrounds. This type of behavior will not be tolerated. We are stronger when we work together.”

Larson-Wolbrink said his church “will not be intimidated by these flyers nor deterred in our efforts to build relationships with our neighbors of all backgrounds. Our faith in Jesus Christ compels us to love all people, with no exceptions.”

Rabbi Brent Spodek of the Beacon Hebrew Alliance, who posted a blog item about the flier, said local clergy plan to host an event on Nov. 1 in response to the anti-Semitism expressed in the flier.

“I was gratified that when my clergy colleagues saw the fliers, our relationship was such that they contacted me immediately,” he said in a statement. “There is hatred in this world, but so too there is always love.”

One thought on “Hate Hits the Highlands”