The city took the Tioronda apart. Can it put it back together?

Decommissioned by the state in 1985 and dismantled two decades later, Beacon’s Tioronda Bridge, once a part of the National Register of Historic Places, has become a puzzle no one appears able to solve.

It hasn’t always been that way. The one-lane bridge, built in 1872 by the Ohio Bridge Co., carried South Avenue traffic across Fishkill Creek for 134 years, noted Frank Griggs Jr., an engineer hired by the City Council last year to provide an update on restoring the crossway. The bridge, he wrote in a report to the council, was built with iron bowstring trusses and became a rare surviving example of a technology that flourished briefly before steel became the dominant component of U.S. bridges.

Robert Murphy, then president of the Beacon Historical Society, continued the story in a blog post last year, noting that in 1976, the state’s deputy commissioner for historic preservation, Julia Stokes, helped get it nominated for the federal Historic Register. By 1986, Murphy noted, the state had considered widening the bridge to two lanes and adding a concrete deck, but through Stokes’ efforts, the plan to modernize the bridge was put on hold. 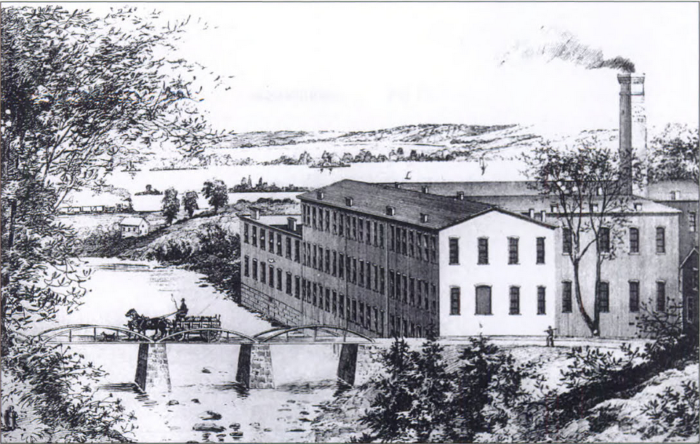 A 19th-century drawing of the bridge (BHS)

The story since then has more ups and downs than a game of Ping-Pong. With the bridge closed to traffic, two Dutchess County rehabilitation programs came and went, recalled Beacon Mayor Randy Casale, but funding was never secured. In one instance, the City Council argued that the bridge should be reopened for pedestrians, but with funding only available for a vehicular rebuild, no consensus was reached.

“Should it be historical [for pedestrians], or should it be a little more modern [for vehicles],” asked City Administrator Anthony Ruggiero. “That’s what started the whole debate.”

In 2006, the city dismantled the bridge and piled the trusses against a fence near the Beacon transfer station, where they deteriorated for years and were overgrown by brush. Meanwhile, the state Office of Parks, Recreation and Historic Preservation advised the city that the bridge had lost its historical significance and would be removed from the National Register. 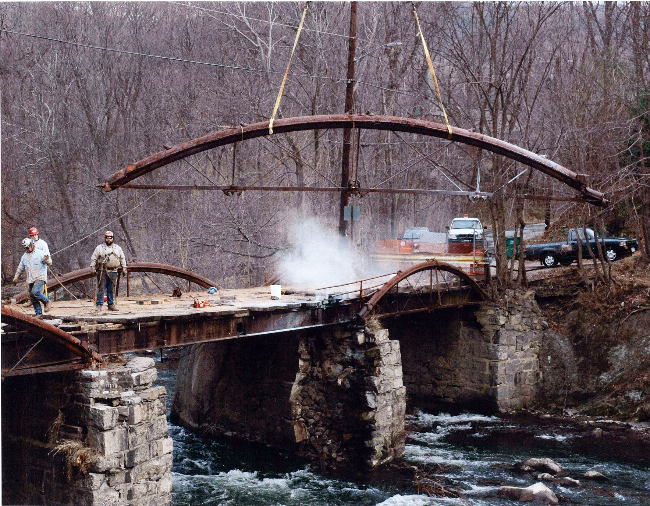 Today all that remains at the original site are two split-stone abutments and two piers, portions of which were modified when sewer and water utilities crossing Fishkill Creek were rehabilitated. Fencing restricts access.

In 2017, then-Assemblyman Frank Skartados secured $500,000 in funding to rebuild the bridge with a walkway and a single lane of low-speed vehicular traffic. With a plan, that funding is still available, Ruggiero said, and the Planning Board will take another stab at solving the puzzle at its meeting on Feb. 13.

City Council Member Lee Kyriacou says he believes the one- versus two-lane debate ended with Skartados’ grant, which came from the state Department of Transportation. “Once funding was made available [for a single lane], the essence of the argument for two lanes went away,” he said. 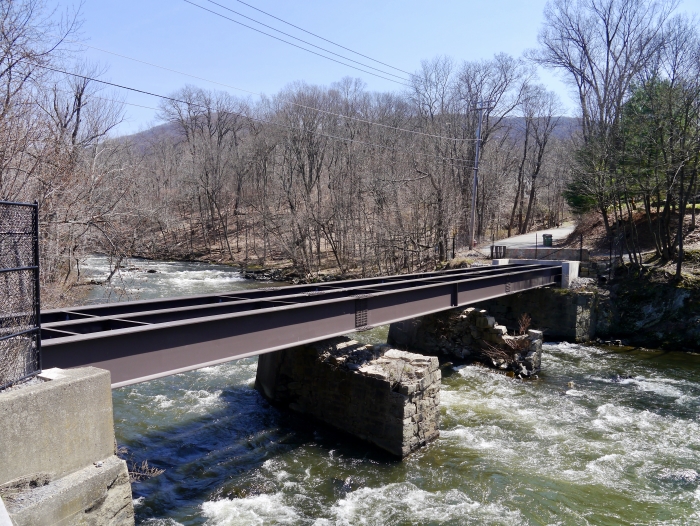 However, because the bridge lies within the city’s historic district, which has stricter design guidelines, any rehab would need to be carefully measured. Adequate emergency access must be considered, as well. “We have a moral obligation to do something more than the minimum” within the city’s zoning laws, Kyriacou said.

In his report, the consultant Griggs determined that one and maybe two of the six bowstring trusses could be restored for display purposes. He suggested that one arch be placed near the site with a sign explaining the significance of the bridge.

Casale, who has witnessed the topsy-turvy story as a highway superintendent, council member and now as mayor, said he remains flexible regarding the project — to a degree.

“I’m willing to be open-minded to make it work for everybody,” he said, “but not to have a vehicular bridge there is ridiculous.”

One thought on “Beacon’s Lost Bridge”