After prolonged debate, the Putnam County Legislature voted 8-1 on Tuesday (April 2) to approve a resolution seeking repeal of the Reproductive Health Act, a state law that ensures abortion rights, addresses related health matters, and removes references to abortion from the criminal code.

Legislator Nancy Montgomery, who represents Philipstown and is the body’s sole Democrat, cast the lone “no” vote.

The vote came during the Legislature’s regular monthly meeting, which drew crowds of opponents and supporters to the historic courthouse in Carmel where the Legislature convenes.

The two camps demonstrated outside and, well before the meeting, filled the chamber and broke into competing rounds of “Amazing Grace” (resolution supporters) and “We Shall Overcome” (opponents). Other spectators crowded the downstairs corridor and stairs, hoping to enter. Many got their chance only after early-comers left as the meeting stretched on for nearly four hours. 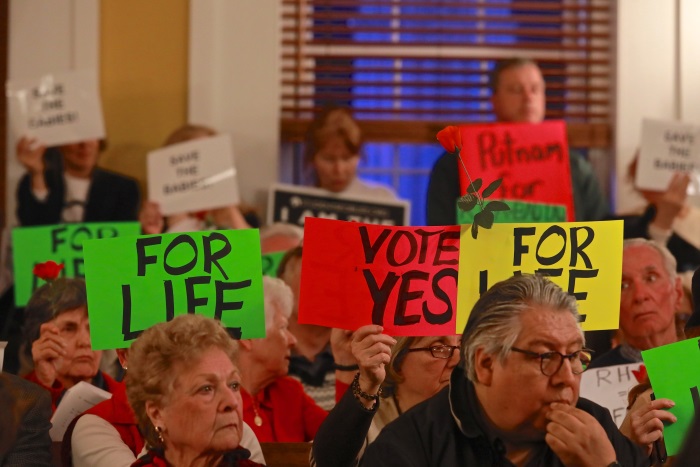 Many people in the audience held up signs voicing their support or opposition to abortion rights. (Photo by Ross Corsair)

The Putnam resolution urges Gov. Andrew Cuomo and the state Legislature to repeal the Reproductive Health Act (RHA), which, it claims, is “essentially authorizing infanticide” and will make abortions “less safe and more common” and “allow violent criminal acts to go unpunished.” The RHA languished in Albany for years until winning passage in January after Democrats won enough seats in November to control the Senate and Assembly.

Although Putnam appears to be the first county to call for the repeal of the RHA, it is not the first time legislators in Carmel have passed a resolution opposing a state law. In 2013, its members unanimously called on state lawmakers to “set aside and annul” the New York State Secure Ammunition and Firearms Enforcement Act (NY-SAFE), which it said “will have a detrimental effect on hunters, sportsmen and legal gun owners.” The legislatures in 51 other counties, including Dutchess, did the same.

Montgomery, who was elected to the Putnam County Legislature in November, strongly criticized the anti-RHA resolution during a committee meeting on March 18. On Tuesday she again argued that women must be free to make abortion decisions. She likewise questioned county resources being devoted to the resolution, including the hours spent by Robert Firriolo, the Legislature’s attorney, who drafted it and wrote an 11-page memo rebutting Montgomery’s March 18 critique.

Neither that memo, nor any emails, letters and phone messages the legislators received on the issue were included with the materials released to the public and media before the meeting.

Montgomery urged her colleagues “to correct this resolution before moving it forward,” because it “is filled with false claims. We have a responsibility to send [Albany] a resolution based on facts.” She described abortion as “a very, very personal issue,” best left to pregnant women to weigh, without interference, if they encounter difficulties, including serious medical complications. “Where is their voice? I’m here for these women. When government fails to do its job, people die.”

Legislator Nancy Montgomery makes a point during the debate over the resolution. (Photo by Ross Corsair)

Science recognizes that “life begins at conception. Abortion takes away the life of a human. The taking of that innocent life is the point to which we object,” said Legislator Neal Sullivan of Carmel. “I’m very disappointed that the governor and state Legislature pushed this horrible legislation through.”

Legislator Carl Albano, who represents parts of Carmel and Patterson, noted that the Pledge of Allegiance refers to liberty and justice for all. “When we say, ‘for all,’ that includes the unborn.” He assured everyone that “there is no extra taxpayer money spent on topics like this.”

Legislator Paul Jonke of Southeast maintained that when county lawmakers object to state legislation, they have a responsibility to propose its repeal.

Legislator Ginny Nacerino of Patterson, who sponsored the resolution, contended that the RHA contains “way too many loopholes” and that, consequently, “a born-alive baby” who survives an abortion “has no rights in New York. I find this law to be barbaric and beyond the pale.” Many people stood to applaud, including a number of county employees and officials.

As Montgomery attempted to refute the allegations — “we’re not killing live babies” — a couple of her colleagues cut her off, demanding that they vote. So they did.

Carlos Salcedo of North Highlands, who supported the resolution, described the evening as uplifting. “In a moment as somber as this, I’m pretty excited we’re exercising our democratic rights” peacefully and with deep commitment, he said. 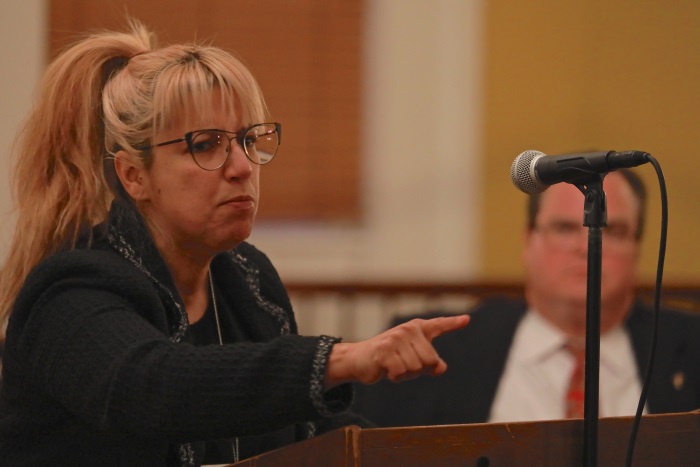 In emotional testimony, a woman criticized legislators for the resolution, citing what she said was her own experience with an abortion that was needed to save her life.
(Photo by Ross Corsair)

Ellen Egetor of Cold Spring read a poem accusing Cuomo and state lawmakers of “killing children” and predicting that “good Catholics will stop you” and “fire and brimstone are coming.”

Another Cold Spring resident, Connor Brennan, faulted “the county legislators who concocted this [resolution] to waste taxpayer money — and all for nothing,” when it could have gone to useful projects. “I congratulate you for tarnishing this venerable body’s reputation.”

Sonia Ryzy-Ryski of Nelsonville told legislators, “I want you to know that I’m not in favor of killing babies” and that “women are capable of making decisions” on abortion without lawmakers’ involvement.

Kevin McConville, a former candidate for county sheriff, praised legislators for their stance, which “took guts. And that’s what you’re elected to do,” he said. “You’ve earned my respect and admiration.”