Pete is born in Manhattan to Charles Seeger Jr., a Harvard-trained composer with pacifist views, and Constance de Clyver, a concert violinist. He is the youngest of the couple’s three sons. 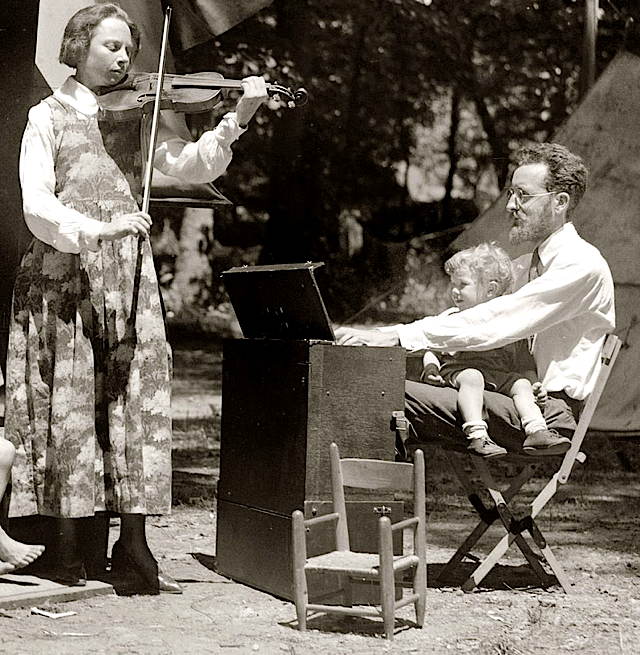 Pete on his father’s lap while mom plays the violin

The family sets out in a Model T Ford hauling a homemade trailer to perform classical music in the rural South. Pete’s mother ends the trip after she stops her toddler at the last moment from walking into a campfire. 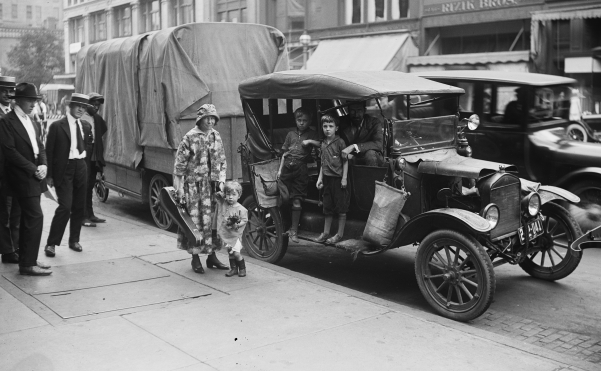 The Seeger family prepares to leave Washington, D.C., on its 1921 “trailer trip.” Pete is holding his mother’s hand. (LOC)

Pete buys a used, four-string (tenor) banjo while attending a private high school in Connecticut but eventually realizes he can’t play folk music on it.

Pete hears the five-string banjo when his father takes him to the Mountain Dance and Folk Festival in North Carolina. “I discovered there was some good music in my country that I never heard on the radio,” he recalled. 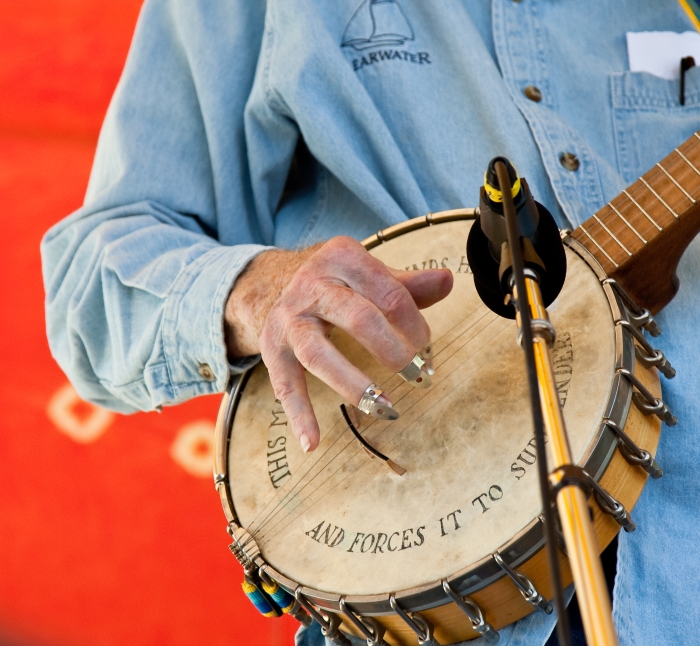 Pete, a member of the Young Communist League, grows disillusioned at Harvard and drops out. His stepmother (his parents had divorced) tells him, “Peter, you have a talent for song-leading. I think you should develop it.” He spends the summer traveling with the Vagabond Puppeteers.

Pete takes a job at the Library of Congress in the Archive of American Folk Song. He meets Woody Guthrie when they both play the same benefit.

Pete is a founding member with Guthrie of the Almanac Singers, which releases an album, Songs of John Doe, that is critical of the draft. 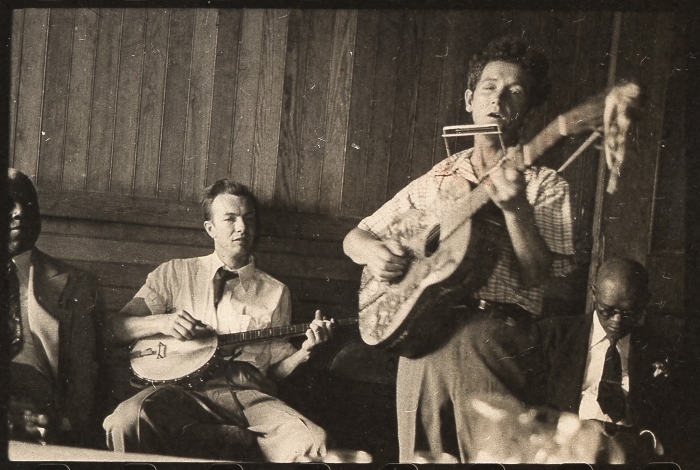 Pete with Woody Guthrie about 1950

After the U.S. enters the war, the Almanac Singers release a new album, Dear Mr. President, on which Pete sings: “Now, Mr. President, / We haven’t always agreed in the past, I know, / But that ain’t at all important now. / What is important is what we got to do, / We got to lick Mr. Hitler, and until we do, / Other things can wait.” … Pete is drafted into the U.S. Army and sent to the Pacific. 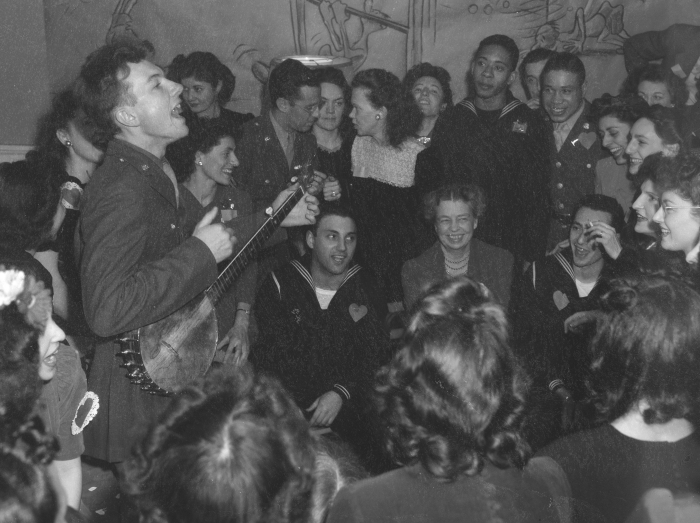 Pete returns from the Army and, with three friends, forms The Weavers.

Pete and Toshi, who are living with her parents in Greenwich Village, buy 17 acres at the base of Mount Beacon and build a two-room log cabin. Pete joins the Dutchess Junction Volunteer Fire Department, and quits the Communist Party. “I thought it was pointless,” he said. 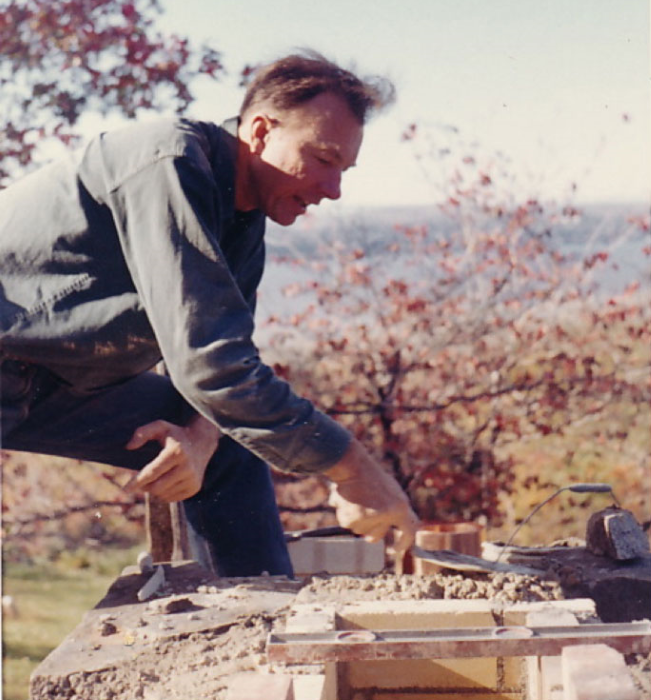 Pete works on the cabin in Beacon, circa 1950 (Snapshot courtesy Gene Deitch)

The Weavers top the charts for 13 weeks with a cover of Lead Belly’s “Goodnight Irene.” Within a year, the group has sold 4 million records. Pete tells Time: “It’s not so much fun now.”

The Weavers are blacklisted after an informant tells the House Un-American Activities Committee that three of its four members, including Pete, are Communists.

Pete is ordered to testify before the committee.

SEEGER: I feel that in my whole life I have never done anything of any conspiratorial nature and I resent very much and very deeply the implication of being called before this committee that in some way because my opinions may be different from yours, or yours, Mr. Willis, or yours, Mr. Scherer, that I am any less of an American than anybody else. I love my country very deeply, sir.
CHAIRMAN WALTER: Why don’t you make a little contribution toward preserving its institutions?
SEEGER: I feel that my whole life is a contribution. That is why I would like to tell you about it.
CHAIRMAN WALTER: I don’t want to hear about it.

The Weavers regroup to play a sold-out show at Carnegie Hall. But Pete leaves in 1957 after the other three members agree to do a cigarette commercial.

Pete is indicted on 10 counts of contempt of Congress. He is convicted in 1961 and given a year in jail but the sentence is overturned on appeal.

Pete and others popularize the spiritual “We Will Overcome” as the anthem of the civil rights movement. Pete
says he changed “will” to “shall” to make it easier to sing.

The Kingston Trio has a hit with Pete’s “Where Have All the Flowers Gone?” and Peter, Paul and Mary with
“If I Had a Hammer.”

The Byrds top the charts with Pete’s “Turn! Turn! Turn!”

The Smothers Brothers ask Pete to perform his anti-war song, “Waist Deep in the Big Muddy,” during a taping of their variety show, but it is cut by CBS censors.

The Clearwater, a replica of a Hudson River sloop, is launched.

Pete performs at a benefit concert for the Solidarity resistance movement in Poland.

Pete receives the National Medal of Arts from President Bill Clinton, as well as the Kennedy Center Honor.

Pete tells The New York Times: “I still call myself a communist, because communism is no more what Russia made of it than Christianity is what the churches make of it.”

Pete wins the Grammy for Best Traditional Folk Album for Pete. He also is inducted into the Rock & Roll Hall of Fame.

Pete and his grandson, Tao Rodriquez-Seeger, sing Guthrie’s “This Land is Your Land” with Bruce Springsteen at Barack Obama’s inaugural concert… Pete wins the Grammy for Best Traditional Folk Album for At 89.

Pete wins the Grammy for Best Musical Album for Children for Tomorrow’s Children.

Pete is nominated for a Grammy for Best Spoken Word Album for Pete Seeger: The Storm King: Narratives, Poems.

Pete dies in a New York City hospital on Jan. 27 at age 94. After his death, he is named the inaugural winner of the Woody Guthrie Prize. 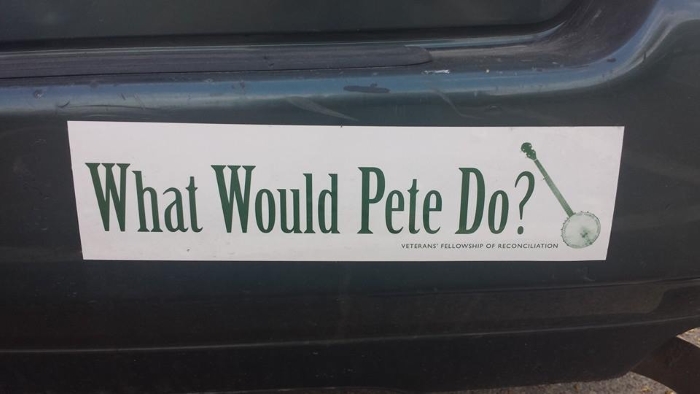