The Canada geese who reside at Beacon’s riverfront will remain free to enjoy Seeger Park for at least another year — as long as they’re not hit by a plane.

Representatives from the U.S. Department of Agriculture and the Air National Guard asked the City Council last month for permission to capture and kill the flock of about 60 geese who live year-round at the park because the birds are close enough — within 7 miles — to New York Stewart International Airport that they could cross the flight paths of Air Force planes.

The council opted to leave the geese alone for the time being, Mayor Randy Casale said this week, because the USDA can only take action during a three-week, early summer period when the birds shed their flying feathers, or molt. 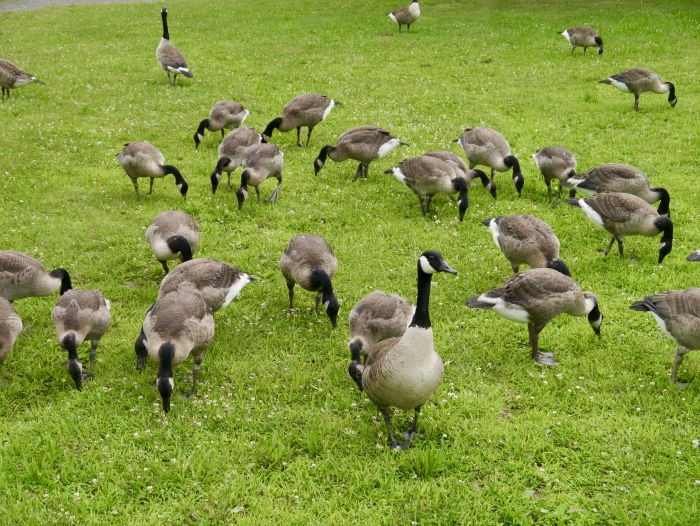 The geese at Seeger Park enjoying their reprieve (Photo by J. Simms)

The geese pose a significant hazard to the military aircraft flying in and out of Stewart, said Ken Cruiser, the USDA’s eastern district supervisor for wildlife services, at the council’s June 24 meeting. “We only fly about six times a week and we average a bird strike every month,” added an Air Force officer based at Stewart.

The USDA proposed herding the Beacon geese into a pen and, from there, into crates. After the birds were killed, the meat would be distributed to homeless shelters. “It is a viable source of protein,” Cruiser said.

Council Member Terry Nelson opposed the idea. “I’ve got a problem with it,” he said. “It just doesn’t feel right to me.” Council Members Amber Grant and Jodi McCredo also said they were not convinced.

The most infamous geese-plane collision took place in 2009, when a U.S. Airways flight struck a flock shortly after takeoff from LaGuardia Airport. With no engine power, pilots Chesley Sullenberger and Jeffrey Skiles navigated the “Miracle on the Hudson,” ditching the plane in the river and saving its 155 passengers and crew members.

At Stewart, the USDA has tried non-lethal methods to control geese, such as habitat management and pyrotechnics, but studies show those only push the birds away temporarily, Cruiser said.

According to the state Department of Environmental Conservation, there are 230,000 Canada geese in New York, almost three times what the DEC believes would be optimal. Given those numbers, state officials have elected to use the capture-and-kill method near airports.

Casale was out of town and did not attend the June 24 meeting. But he said the abundance of geese creates hazards, “plus they make a mess. If it was up to me, I would have been for it.”

The City Council appears headed toward a second six-month building moratorium after fine-tuning its proposal on June 24.  It enacted a six-month freeze in the fall of 2017.

The council must seek input from the city and Dutchess County planning boards and hold a public hearing before voting. It could also choose to discuss the idea further.

The first draft of the proposal named the city’s Well No. 2, which was taken offline when it began producing “cloudy” water earlier this year, as the impetus for a four-month moratorium. But council members on June 24 pushed for a six-month freeze with the ongoing review of zoning laws in the linkage and historic districts as the catalyst.

“I would really like the priority to be to solve those problems,” McCredo said. The well “is an issue, but I don’t think that’s as dominant.”

Nelson agreed, saying, “I would hate to see our [zoning] issues treated as a footnote. I think it is the most important issue that we’re dealing with and should be addressed as such.”

City Attorney Ed Phillips said he would re-draft the proposal but cautioned that a moratorium, if based on zoning, must be tailored to legislation either being enacted or considered by the council, not a broad review of development. The freeze could be based on both zoning and the faulty well, he said.

The City Council voted at its July 1 meeting to postpone a decision on a resolution opposing a proposal by Danskammer Energy to build a fast-starting, air-cooled facility to replace its nearly 70-year-old natural gas-powered plant in Newburgh.

The new plant would still use natural gas but its emissions would be cut significantly, Danskammer officials have told the council.

Dozens of construction workers, many of them wearing T-shirts representing local and regional labor unions, converged on the City Hall parking lot but none came inside for the meeting.

Grant said Monday that she was OK with tabling the resolution, “but I would like to see a decision made so we don’t spend too much time churning our wheels on this.”

On the same night, Danskammer representatives submitted a letter to the council on the merits of their plans, which the firm said will fill in gaps in electric production after Indian Point closes, while Beacon resident Sergei Krasikov warned the council that the new plant would not be as “clean” as Danskammer suggests.

The Cold Spring Village Board and Philipstown Town Board last month both passed resolutions asking the state Public Service Commission to reject Danskammer’s proposal for expansion.

Michael B. Justice, a Beacon resident who is running on the Republican and Conservative party lines to challenge incumbent Nick Page for the District 18 seat in the Dutchess County Legislature, was arrested on May 11 by a state trooper for allegedly driving under the influence.

The state police said Justice was driving on Route 52 in Beacon when he was stopped for a traffic violation. Justice did not immediately respond to an email seeking comment.

At its annual organizational meeting on July 1, the Beacon City Board of Education re-elected Anthony White and Meredith Heuer as its president and vice president, respectively. Board Member Antony Tseng nominated himself for the president’s seat but his motion was not seconded.

6 thoughts on “Beacon Geese Get Reprieve — For Now”