The Cold Spring Village Board on Tuesday (June 25) voted to oppose the proposed expansion of the Danskammer power plant on the Hudson River north of Newburgh.

By a 4-1 vote, trustees approved a resolution asking the state Public Service Commission to reject the Danskammer application.

On June 5, Philipstown’s Town Board passed a similar resolution opposing the project.

The plant, currently seldom used, would be fueled by natural gas obtained in Pennsylvania through fracking, a process long-condemned by environmentalists.

The Cold Spring resolution asserts that the project would increase emissions of methane, carbon dioxide and carbon monoxide into the air, accelerating global warming. It also claims that while the expansion would create jobs, the increased use of renewable energy sources such as wind and solar would have greater employment benefits while slowing climate change.

“I’m against the project,” Mayor Dave Merandy said. “I need go no further than the use of fracked gas… I just can’t get past that.”

The mayor also questioned the need for the additional electrical power. “There has been representation that there is no need for this plant,” he said, adding that the plans to close of the Indian Point nuclear plant had to have accounted for regional power needs. 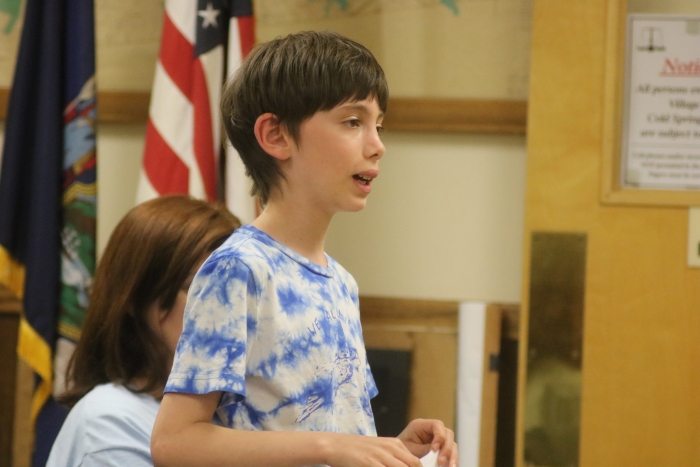 Dana Spiegel, 12, spoke against the Danskammer power plant at the June 11 village board meeting. (Photo by M. Turton)

Trustee Steve Voloto questioned the wisdom of facility’s location, arguing that if a $400 million power plant is needed it should not be built where it might flood.

Fran Murphy, who cast the lone vote against the resolution, later wrote in an email that “while I wish we were in a better place regarding green energy, we’re not there yet. To fill the gap left by closing Indian Point, I’d rather see a current plant be updated, modernized and made more efficient than to attempt to build a new plant.”

Dana Spiegel, 12, of Cold Spring, cited a number of environmental and economic reasons for opposing the Danskammer project when he addressed the village board at its June 11 meeting. The trustees said his written submission helped shape the resolution.

The board approved a $90,000 pay package for Matt Kroog, who will succeed the retiring Greg Phillips as superintendent of water and wastewater. He is working with Phillips to become familiar with both village systems.

The package includes a $15,000 stipend, and the vote was delayed when Deputy Mayor Marie Early pointed out that the village employee handbook says a stipend cannot be paid until after a new employee has completed a probationary period.

She suggested waiving the probationary period. But Merandy and Voloto spoke argued it should be left intact to protect the village.

After a lengthy discussion, it was noted that a stipend can take effect immediately as long as the board approves the payment. Trustees then voted to pay the stipend immediately. Kroog will serve a six-month probationary period, which the board can extend to a full year.

“This guy was hard to get,” Voloto said. “We’re lucky to have him.” Kroog was the only applicant certified to operate both the water and wastewater systems.