The superintendent of the Haldane Central School District canceled a Chick-fil-A fundraiser planned for the homecoming football game on Sept. 20 because of concerns about commercial activity on school grounds and the restaurant chain’s history of supporting organizations that oppose same-sex marriage or disparage homosexuality as sinful.

In response, a parent purchased more than $300 worth of Chick-fil-A sandwiches that she and another parent distributed to Haldane student-athletes and spectators.

In a letter to parents on Monday (Sept. 23), Superintendent Philip Benante wrote that he had been notified two days before the Friday night game that employees from Chick-fil-A had been invited to sell donated sandwiches at the game to benefit the football booster club. Benante said Haldane Coach Ryan McConville, with the approval of athletic director Chris Salumn, had arranged the fundraiser.

Benante said he was alerted to the plan after a parent complained that foundations funded by Chick-fil-A support organizations criticized as being anti-gay. The founders of the chain are evangelical Christians; besides its sandwiches, the restaurant is known for being closed on Sundays.

Benante told Salumn to cancel the fundraiser and, in his email to parents, outlined his objections. He said Chick-fil-A had promoted its products for fundraisers in February at a meeting of football coaches from Section 1, which includes schools in Putnam and Dutchess counties. Benante said he felt that pitch was “outside the scope of acceptable activity at such coaches’ meetings.”

As for the gay-rights issue, he told parents, “it is well-documented that the company’s CEO has been outspoken on social issues which impact the LGBTQ community. Given such, additional policies and procedures must be reviewed prior to entering into any arrangement for the sale of the company’s product on school grounds in order to maintain an appropriate educational environment.”

Benante clarified in an email to The Current that those additional Haldane policies would include one that prohibits discrimination against students or faculty members based on sexual orientation or gender “at all school-sponsored activities, programs and events.” He also wrote that he “was concerned about the potential disruption to the school community” given the strong feelings about the company.

Benante told parents that he planned to share his concerns with the executive board of Section 1 Athletics while also reviewing Haldane’s fundraising policies.

After the fundraiser was canceled, several parents upset with the decision made their own arrangements. Melissa Santos of Cold Spring, whose twin sons play on the football team and whose daughter is on the junior varsity volleyball squad, said she drove the 45 minutes to the Danbury Fair Mall in Connecticut with a friend to purchase 75 sandwiches for $312.

Chick-fil-A, which is the third largest restaurant chain in the nation behind McDonald’s and Starbucks (it has 27 outlets in New York state, including in New York City), has drawn criticism because its founders have supported organizations that oppose same-sex marriage or denounce homosexuality as sinful.

In 2012, an executive, Dan Cathy, claimed same-sex marriage was “inviting God’s judgment on our nation.” He added that his company was “very much supportive of the family,” which he defined as the “biblical definition of the family unit.”

In response to criticism, Chick-fil-A said it would “leave the policy debate over same-sex marriage to the government and political arena.” The family’s Marriage & Family Legacy Fund, which was created to fight same-sex marriage, was dissolved in 2013, and the firm says its foundations no longer support strident groups such as the Family Research Council.

In 2017, according to its most recent available IRS filing, the Chick-fil-A Foundation gave nearly $10 million to 300 causes, mostly charities that serve low-income children. But the list included two organizations that have been accused of being anti-gay: The Fellowship of Christian Athletes (FCA), which received $1.65 million in 2017, and the Salvation Army, which was given $150,000.

The FCA requires members to agree to a Sexual Purity Statement that describes homosexuality as not “acceptable to God”; the Salvation Army has long been criticized for its stance that homosexuality is sinful.

The Chick-fil-A Foundation said the money given to the FCA was only used for summer camps and that campers “were not required to be a member of FCA and did not have to sign any FCA pledges.”

The funds given to the Salvation Army, it said, was also for camps as well as Christmas gifts for low-income children. The Salvation Army has in recent years removed assertions about homosexuality from its website and emphasizes that its services are provided to anyone who needs them, including gays and lesbians.

Chick-fil-A still faces occasional backlash. Earlier this year, officials in Buffalo and San Antonio, Texas, prevented the company from opening outlets in airport food courts. A few universities also have turned down proposals to bring the restaurant to campus, including Fordham and Rider University in New Jersey.

In response, Chick-fil-A said in a statement that it does “not have a political or social agenda” and that “we embrace all people, regardless of religion, race, gender, ethnicity, sexual orientation or gender identity.”

Santos delivered 25 sandwiches to the J.V. volleyball team, which also played Friday, while Mary Ellen Yannitelli of Garrison, whose late son Anthony played for Haldane, handed out the remainder during the game while standing next to the concession stand in an area behind a table operated by the Blue Devil Booster Club.

Yannitelli said she had started to make a sign that read “Eat Mor Chikin” — the Chick-fil-A slogan — but had only completed the E and A before 30 people were in line.

“We could have sold 500,” she said, although she asked only for donations “since this was unofficial. It was all kind of sneaky.” Yannitelli later drove to Danbury to buy 25 more sandwiches because none had been set aside for the football players.

Santos said she was upset with Benante’s decision because she felt the district had “allowed an adult issue into a children’s game” and “allowed someone to infiltrate our school system to hurt our children. Nobody cared about the LGBTQ connection. Chick-fil-A wanted to give our kids sandwiches, and I don’t think there was any ulterior motive on its part.

“My son Darrin came home so excited when he learned they planned to have Chick-fil-A,” she said. “He told me, ‘Guess what I heard?’ I didn’t want my kids to be disappointed.” 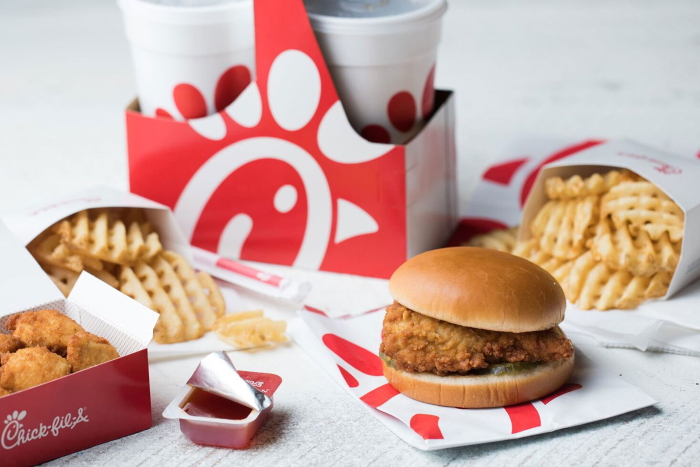 On Facebook, Yannitelli posted that “a few intolerant locals took offense” and “a fundraiser got squashed. I’m crushed. I loathe intolerance.”

Later, in an interview, Yannitelli said that “the parent who complained and anyone else has the option to not buy a chicken sandwich. Frankly, I could go to the school tomorrow and say, ‘I want you to get rid of Facebook and Chrome and Google because they support causes I don’t believe in.’ If people want to buy products from companies that support gay issues, nobody is stopping them. Where does it end?”

Many of the residents and parents who congratulated Yannitelli on Facebook after she quipped that she was a “rebel” who was “bucking the system” dismissed the complaint about Chick-fil-A as having come from “bullies,” “the perpetually triggered” and a small group “who felt the need to bring their agenda to a nice, small community.” One person praised Yannitelli for her stand against “political correctness.”