Tracey Walsh, the new director of the Putnam County Tourism Department, visited Cold Spring on Tuesday (Sept. 24) to introduce herself to the Village Board.

The Legislature created the Department of Tourism after the Putnam County Visitors’ Bureau — a nonprofit that operated under contract with the county — abruptly shut down in July.

Neither of the Visitor Bureau’s two most recent directors, Bruce Conklin or Frank Smith, appeared before the Village Board.

“I’m into my third week” on the job, Walsh said, adding she has been touring the county, “getting to know people and listening.” 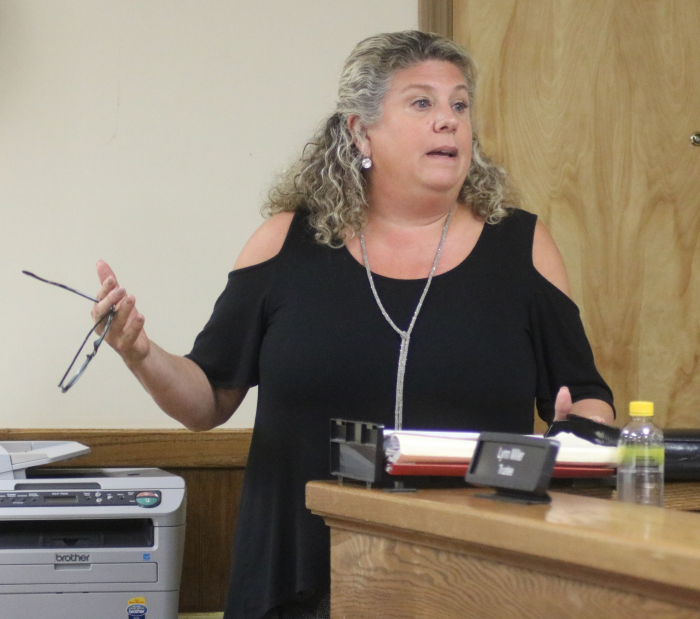 Tracey Walsh, the new director of the Putnam Tourism Department, visited the Village Board on Sept. 24. (Photo by M. Turton)

Walsh acknowledged that the distance between Cold Spring and Carmel often seems greater than 19 miles, noting she was aware of concerns about whether the economic benefits of tourism are distributed equally across the county. “If I do my job right, which I intend to, the whole county will become robust,” she said.

Walsh said she also has met with representatives from the Cold Spring Area Chamber of Commerce, Magazzino Italian Art and Metro-North. “There seems to be a feeling of being overrun when the [fall cruise] boats come in,” she said. “It sounds like you need tourism management.”

“We’re pretty much overwhelmed,” said Mayor Dave Merandy. “We don’t need any advertising.” He said although the village is a destination it isn’t treated like one by the county. “We receive hardly any money,” he said, although the village must absorb costs such as extra policing when its population surges in the summer.

The mayor repeated his frequent criticism that the $7,500 Cold Spring receives annually from the county to assist with tourism-related garbage collection hasn’t increased in “forever.”

When Merandy acknowledged that such funding isn’t part of her department’s mandate, Walsh responded with a smile: “I’m glad you said that aloud. I’m not the magic money lady!”

Trustee Lynn Miller emphasized that with tourism comes the need for improved infrastructure. “We can’t just keep pouring money into repairing and building bathrooms,” she said. “That cost falls on 800 households.”

Walsh said she has heard “loud and clear” that the village needs help in providing restrooms for visitors.

She said Putnam Tourism has to rebuild “from scratch,” including reestablishing state funding and relaunching visitputnam.org, which the Visitors’ Bureau took down when its board dissolved the nonprofit.

Five days earlier, on Sept. 19, Walsh met with county legislators in Carmel during a meeting of their Economic Development Committee.

Walsh said she was working with a Pennsylvania marketing firm, Jill Duffy/Applied Golf, on print and radio ads with the theme “so much to offer so close to home.” The agency’s new tagline, she said, will be “Perfectly Putnam” and a logo is being created.

She said the department’s target audience includes residents from nearby Fairfield County in Connecticut and Westchester and Dutchess counties, as well as up and down the Hudson to New York City.

■ Kathleen Abels, who in July was appointed president of the Putnam County Economic Development Corp., also addressed the board. “We’re a facilitator,” she explained. “We bring together businesses and resources,” adding that she has a particular interest in supporting infrastructure projects. The EDC, a nonprofit that is funded primarily by Putnam County, does not provide grants. Instead she said, “we direct people to possible pots of gold for projects,” pointing to grants through the Empire State Development Corp. as one avenue to pursue. Like Walsh, she acknowledged the disconnect between eastern and western Putnam County. “That’s something we need to work on.”

■ Roberto Muller updated the board on the Complete Streets Program being undertaken by the town. The program aims to ensure local transportation networks are safe for all users while balancing economic, cultural and environmental interests. Muller said program benefits cam include improved access to community resources for non-drivers, reduced greenhouse gas emissions, pedestrian and cyclist safety, health improvements through exercise, economic benefits via retail sales and increased sense of community.

■ The board authorized Merandy to sign a contract with Seastreak for its 2019 fall cruise season, which is scheduled to begin the first weekend in October.

■ A resolution will be introduced at the Oct. 1 meeting outlining proposed changes to the village code regarding escrow accounts. A public meeting will be required.

■ Trustees approved a request to close B Street for a block party on Oct. 6 from noon to 7 p.m.