Despite protests, vote is unanimous to end federal lawsuit

The Nelsonville Village Board on Tuesday unanimously approved a settlement of the federal lawsuit filed by telecommunications giants against the tiny municipality for rejecting a plan to build a cell tower on a hill overlooking the Cold Spring Cemetery.

The Jan. 21 vote followed last-ditch pleas by opponents and clears the way for a 95-foot tower that is 15 feet shorter than one proposed in 2017 by Homeland Towers and its partner, Verizon Wireless. Mimicking a fir tree, the “monopine” structure would be built at 15 Rockledge Road.

Homeland and Verizon sued in June 2018, alleging the Zoning Board of Appeals had violated federal law by denying a permit to build the tower. The zoning board decision followed months of review. AT&T Mobility, which wants to use the Verizon facility, also sued.

Negotiations led to the agreement. John Diaconis, a village lawyer, said the judge and municipal insurers favored ending the dispute and that “it’s not easy to get these settlements.” 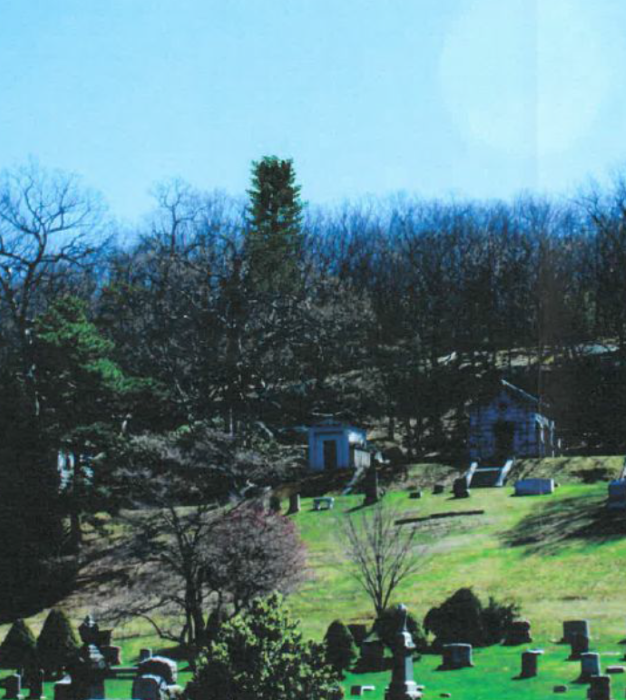 A rendering from a consultant’s report of what a 95-foot monopine would look like overlooking the Cold Spring Cemetery.

The eight-page document forbids any future increase in the tower height and bans development elsewhere on the 9.6-acre site, which is in an area of suburban-rural homes and old farms.

It also provides that the structure’s lighting will project downward, noise pollution will be minimized, the village can help design the layout of the tower driveway, vegetative screening will help shield the tower, the tower will comply with zoning laws, and tower sponsors will create a $30,000 fund to help neighbors with landscaping, although anyone accepting that money must agree not to sue.

The Rockledge site owner, Doug Logan, plans to sell the parcel to Homeland, rather than lease it. He said his alternative plan for the site would be three to five homes, “which would make a real mess, right up against the cemetery.”

Logan, who also manages the Cold Spring Cemetery, said he has often heard from opponents that they want to “save the cemetery” from the tower. “I don’t know what the hell the tower is going to do,” he remarked. “It’s not going to walk down there at night and tear the place apart.”

Tom Corless, a former Nelsonville mayor who is a Putnam County Sheriff’s Department senior investigator, concurred. He noted that after a sheriff’s deputy was slashed on Monday (Jan. 20), the wounded officer was “calling for help and calling for help” but his radio wasn’t connecting.

Corless said calls often cycle through a tower in Orange County and then back across the Hudson River. “This tower is critical,” he said.

However, another former Nelsonville mayor, Bill O’Neill, advocated further court action because “you have to fight for things you believe in.” O’Neill observed that 5G telecommunications systems, which require more but smaller poles, “may alter the need for cell towers.” He also predicted that the village will now face lawsuits from residents.

One resident who has campaigned against the Rockledge location, Eliza Nagel, said that in the preceding week $30,000 had been raised for further litigation. “I urge you to refuse” the settlement and to work with the opponents “to find a way to continue this fight,” she told the board. “We need to stand up for our own decision.”

But Mayor Mike Bowman said village officials had “exhausted every possible alternative” to a settlement.

Moreover, Maria Dickey, a Nelsonville resident who is a lawyer with the state appellate court system, warned that $30,000 wouldn’t go far. The expense of continued litigation probably “is enough to crush this little village,” she said.

Trustee Dove Pedlosky assured cell-tower opponents that she had “immense respect for your passion. I share it.” Nonetheless, she cited “the forces we are up against and the particular fragility of our teeny village,” which has 600 residents and $132,000 in savings.

“We are in no position to deplete the village’s small savings, sell our open space, or impose an assessment on those struggling [economically] to fund a legal battle with such odds,” she said. Even paying outstanding legal bills will require money provided by the settlement, she noted.(The companies will pay $35,758 toward the costs the village incurred in months of reviewing the tower application.)

“I told myself I would keep fighting [the tower] until such efforts might jeopardize our village,” Pedlosky said. “I believe this settlement is the least atrocious of the outcomes.”

Her colleagues agreed. “Sometimes,” Bowman concluded, “the most courageous thing is to make the decision that is not popular.”

Nelsonville’s settlement resembles one approved by the Philipstown Town Board in July to end a federal lawsuit filed by Homeland Towers and Verizon after the town refused to issue a permit for a tower on Vineyard Road near the intersection of Routes 9 and 301.