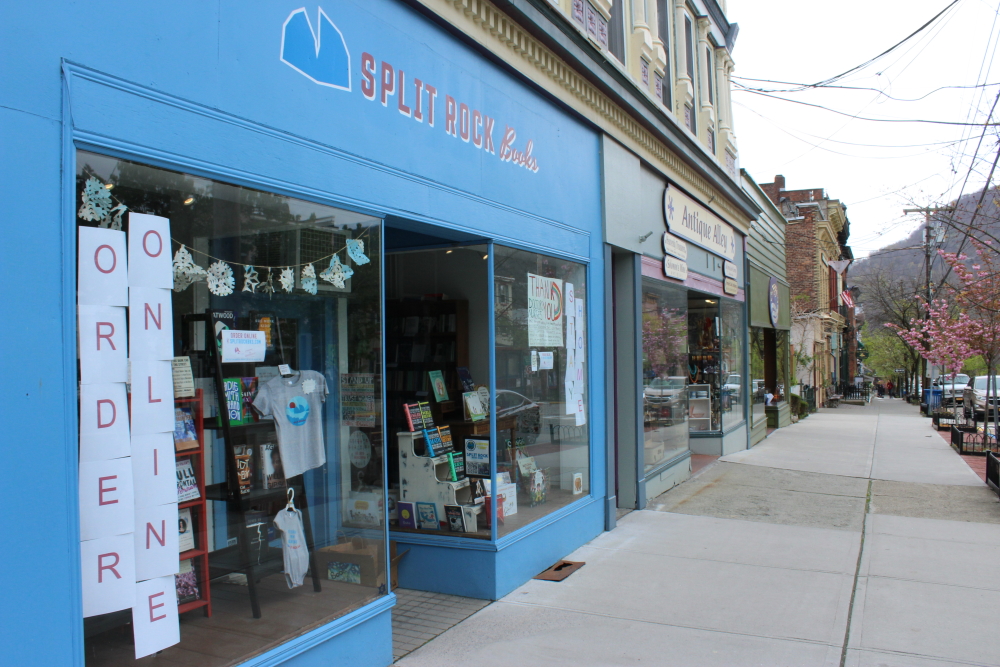 Retailers such as Split Rock Books on Main Street in Cold Spring would be able to reopen under Phase 2 of the governor's plan. (Photo by L. Sparks)

The seven-county Hudson Valley region that includes Dutchess and Putnam has not met the criteria to begin a phased-in loosening of restrictions put in place in March to slow the spread of COVID-19.

The Mid-Hudson, which has 2.3 million people, falls short on three of seven benchmarks: (1) sustained decreases in hospital deaths; (2) fewer than two new hospitalizations a day per 100,000 residents; and (3) a minimum of 30 people per 100,000 to trace those who come into contact with people confirmed positive.

Besides Dutchess and Putnam, the region consists of Westchester County, which has the most COVID-19 cases outside of New York City and Long Island; Orange and Rockland counties, which also have high numbers of cases; and Sullivan and Ulster. Putnam County Executive MaryEllen Odell, Dutchess County Marc Molinaro and state Sen. Sue Serino, whose district includes the Highlands, have argued that the two counties should be considered “upstate” and not grouped with their neighbors.

New York, where infections and deaths are still high but declining, is one of about 30 states that have announced plans to begin removing restrictions on businesses. The shutdown, now in its eighth week, has led to widespread layoffs and severe revenue shortfalls for states, counties and local municipalities.

Despite the economic pressures, national polls have found a significant majority of Americans prioritize public health, and projections predict that infections and deaths will rise when people begin returning to workplaces, stores and restaurants in large numbers.

“There’s a cost of staying closed; there’s also a cost of reopening quickly,” Cuomo said during his weekday briefing on Tuesday (May 5). “That is the hard truth that we are all dealing with.”

A revised forecast released May 4 by the Seattle-based Institute for Health Metrics and Evaluation predicts that nearly 135,000 deaths will occur in the U.S. by Aug. 4, including 32,132 in New York state. The forecast, more than double an estimate of just over 60,000 on April 17, reflects “rising mobility in most U.S. states as well as the easing of social distancing measures expected in 31 states by May 11,” it said.

The only significant difference between those who identified with one of the two major political parties was on the latter question: 84 percent of Democrats wanted to continue work-from-home policies versus 51 percent of Republicans.

Split Rock Books in Cold Spring is typical of a business operating in the time of crisis.

Orders can be placed online or by phone. Books are packaged and left outside the front door with customers’ names. Pickup times are staggered so that customers are not arriving at the same time.

Sales have fallen dramatically but owners Heidi and Michael Bender said they are not planning to allow customers inside their Main Street shop anytime soon.

On Sunday (May 2), the couple used a Facebook post to express sadness over the death of Cold Spring resident Bill Whipp from COVID-19, as well as anger at the number of people not wearing masks while visiting the village over the weekend.

“We want to be able to pay our bills, but we’re not thinking about profit in that sense right now,” Heidi Bender said. “We’re thinking about our friends and our family and our community.”

In Beacon, Lauren and Todd Decker are also wary of reopening too soon. Their jewelry business, King + Curated, has been closed since March 14.

Todd Decker said he wanted reopening to be “a marathon, not a sprint.” Both he and Lauren are waiting for more guidance on best practices for preventing infections, including social distancing, masks and the use of hand sanitizer.

“As much as it hurts the business to be closed, and the financial hit that we’re taking, I’d rather do it right the first time than go through a relapse,” Lauren Decker said. “We do want to make the right decision for not just our business, but for our customers, too.”

Pierre Vittori was stopped as he walked on Main Street in Cold Spring on April 29. His bike shop shares a space with his wife’s antique business and they also own the space used by the Side Effects boutique and gift shop.

Vittori believes reopening can be done safely, as long as people continue to give each other 6 feet of space and wear masks.

“If I have to live with my mask and keep my distance, I can live with it,” he said.

Retail businesses like Split Rock and King + Curated would be able to reopen in the second phase of Cuomo’s plan, which gives first priority to construction and manufacturing. Professional services and real estate would also be among the businesses allowed to open during Phase 2.

Hotels, restaurants and food service would be in Phase 3, with restrictions. Schools and arts, entertainment and recreational businesses would be the last to reopen.

“Whatever reopening looks like, it needs to be slow, steady and careful,” Molinaro, the Dutchess County executive, said on Wednesday (May 6).

The state’s move toward reopening is being driven by data showing an outbreak in retreat.

Confirmed new cases, hospitalizations and deaths have been falling statewide — overall and as a percentage of people tested — since 11,571 new positive cases were reported on April 14. The state Department of Health said 3,491 people tested positive on Wednesday.

The number of deaths has also been falling since it peaked at 799 on April 8. The state reported 231 deaths on Thursday. Of 20,828 deaths around the state, 96 have been reported for Dutchess residents and 55 for Putnam.

Continued testing is the key to preventing a new outbreak as restrictions are removed, according to the governor and health officials.

Last month, the Garrison-based bioethics think tank, The Hastings Center, hosted an online forum about the need for more testing.

“This is pretty simple; if you want to open the economy, relax the closure of non-essential businesses, you have to be able to control the spread of this virus,” said Ezekiel Emanuel, vice provost for global initiatives at the University of Pennsylvania and a Hastings Center fellow. “And to control the spread, to know how much it’s spreading and where to focus resources, you need testing.”

New York State had tested 1.1 million people, or about 5 percent of the population, since the first test on March 2. Nearly 47,000 people were tested on April 24, the single-day high. In Dutchess County, about 6 percent of residents had been tested and in Putnam about 5 percent.

However, the number of tests and positive cases does not represent the scale of infections because an estimated 80 percent of people infected with the coronavirus will not experience symptoms or only feel mild symptoms, health officials say.

To get a truer estimate of the scale of infections, New York tested 15,000 people visiting grocery stores and community centers around the state for COVID-19 antibodies, the virus-destroying proteins whose presence indicates a past infection.

Dutchess County officials last week announced a plan to test nursing home residents, starting with Wingate at Beacon, which has had five confirmed fatalities. The county also announced the launch of a van service to ferry Poughkeepsie residents to MidHudson Regional Hospital for testing.

More than 12,500 Dutchess residents were tested in April, as well 3,400 Putnam residents. Both met the state’s monthly goal of 30 tests per 1,000 for the month, but Molinaro is concerned that people’s “desire to get tested may begin to wane significantly.”

“Therefore, we might not meet that particular standard,” he said. “And worse yet, we might not know the breadth of the transmission of the disease as we enter a time when people are naturally going to want to move around.”