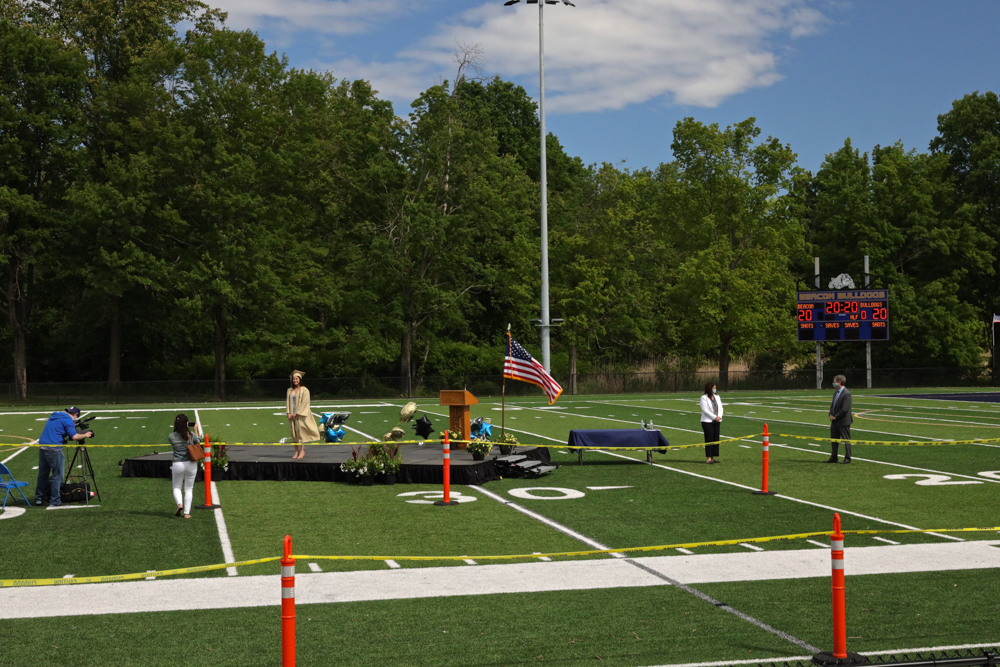 A Beacon High School graduate poses on Monday (June 1) on an empty platform after being congratulated by the high school principal and district superintendent, at right. A videographer, at left, filmed each student to create a "virtual graduation" video. (Photo by Ross Corsair)

High school seniors this week began a graduation season like no other.

Beacon High School held a celebratory walk on its new athletic field on Monday (June 1) during which graduates, in shifts, walked across an empty stage, posed for photos and made speeches. Caps and gowns had been delivered a week earlier.

On June 24 — a Wednesday — the district will hold a “virtual graduation” video premiere at the Hyde Park Drive-In Theatre. Because of social distancing guidelines, each of the district’s 213 graduating seniors will be allowed one six-person vehicle. Passengers will have to remain in their vehicles except to use restrooms and caps may not be tossed in the air.

The event will be a marked departure from the district’s traditional ceremony, which is typically held on a Saturday morning at Dutchess Stadium.

“We’re trying to make this as special as possible,” said Beacon Superintendent Matt Landahl. “It’s been difficult, but we did our best under the circumstances. It was a team effort.” 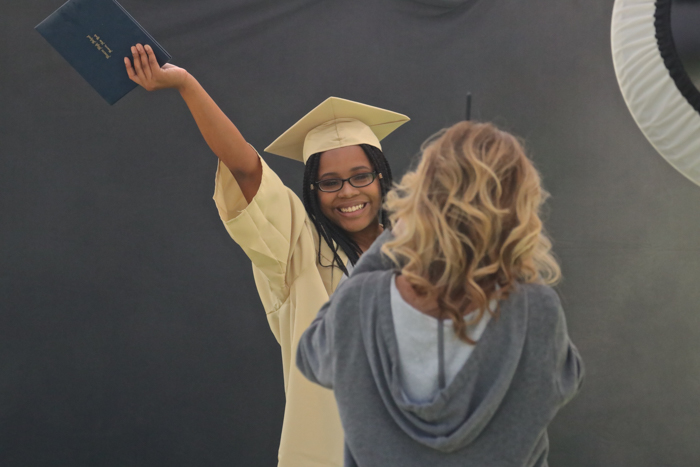 Tzipporah Skaggs poses for a photo after receiving her diploma on Monday at Beacon High School. (Photo by Ross Corsair)

Seniors’ names, along with the colleges they plan to attend if continuing their education, are being scrolled on the district’s electronic sign at the intersection of Matteawan Road and Verplanck Avenue. Scholarship winners will be posted on the district website by June 15.

In Cold Spring, Haldane Principal Julia Sniffen said she will make a final decision by June 13 as to how the district will graduate its 65 seniors.

One scenario would see graduates receive their diplomas, ring the Haldane bell and take photos, individually, by appointment. Speeches would be recorded and shown at an in-car, socially-distanced graduation party.

Alternately, Sniffen said she believes Haldane has enough room to hold an in-person but socially-distanced procession on June 20 — the school’s originally scheduled graduation date — that would be livestreamed, as well. 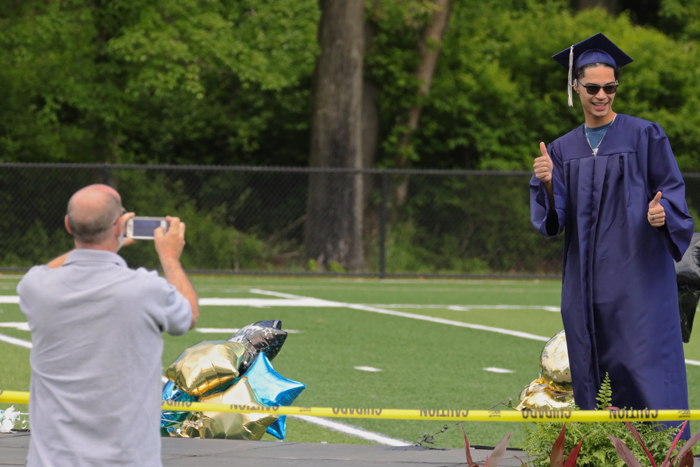 Miles McCabe poses on Monday on a platform set up for a “virtual” graduation. (Photo by Ross Corsair)

For a drive-in, students and their immediate family members would be allowed to attend a ceremony at a drive-in or a school or stadium parking lot, but they would have to stay inside their cars.

A drive-through graduation would be similar to what Beacon High School held this week. Students and their immediate families would arrive by appointment to walk across a stage and have a photo taken with strict social distancing restrictions in place. One person could hand students their diplomas while wearing a mask and gloves, or using hand sanitizer.

For smaller districts, the state said school officials may also visit graduates at their homes, while remaining outside and at least 6 feet away, to congratulate and take students’ photos.

O’Neill High School in Highland Falls, which this year has 20 graduates from Garrison, will broadcast a virtual graduation ceremony on June 24, with speeches from the school’s valedictorian and salutatorian (Isaac Walker, of Garrison), along with photos and videos of the graduates in their caps and gowns.