H.L. Hurlbut spoke for two hours at Town Hall on the benefits of abstinence from intoxicating drinks.

A peddler of All Healing Salve came to town and held forth about the product “with two torches and a glib tongue,” according to the Cold Spring Recorder. “We have not had so much nocturnal excitement since the Wizard Oil men were here.”

A special meeting of Nelsonville residents was called to vote on replacing the schoolhouse, which was often inaccessible because of flooding, but the proposition failed, 54-17.

Ed Baker, who hired John Butler’s horse in Nelsonville for what he said would be an afternoon ride in the country, was seen a week later in New York City.

A child of Edward Burns, sick with diphtheria, was prescribed a throat bath of steam from pure water through an apparatus left by Dr. Murdock. The child’s 33-year-old aunt came to the Market Street home to help administer the steam but her clothes caught fire from the alcohol lamp used to generate it. She ran into the street ablaze. Passersby extinguished the flames, but she died a few hours later.

Two drunk women were observed walking down Main Street at 3 p.m. on a Thursday afternoon, with one yelling: “I’m a city woman! I wasn’t born in this damned old country! I was born in the city of London!”

Alexander Collyer attempted to stop a runaway team of horses at Market and Main streets but was knocked down and the wagon passed over his body.

After walking into a hornet’s nest, the face of Joseph Denney of North Highlands was so swollen that he was barely recognizable.

John Gilbert, who the previous November shot and killed his brother during an argument at their home in Garrison, was convicted by a jury in Carmel of second-degree manslaughter and sentenced to eight years in prison.

Judge and Mrs. Wood left for Annapolis to visit their son, Robert, at the Naval Academy before he sailed for the Madeira Islands aboard the training ship USS Monongahela. He wrote them: “I will give you an idea of what I have been going through the last few days. Reveille at six and lashing up hammock in 10 minutes. Then rest until we are marched to breakfast at the cadet mess hall. After breakfast, march back to the ship and get ready to go to the armory to have drill in marching. Then back to the ship and go up to the masthead. I don’t mind that any more, although it looks high. After dinner, different drills until supper, and last but not least, another drill in the gymnasium at night, then a plunge bath and to bed. I tell you it is no snap.” 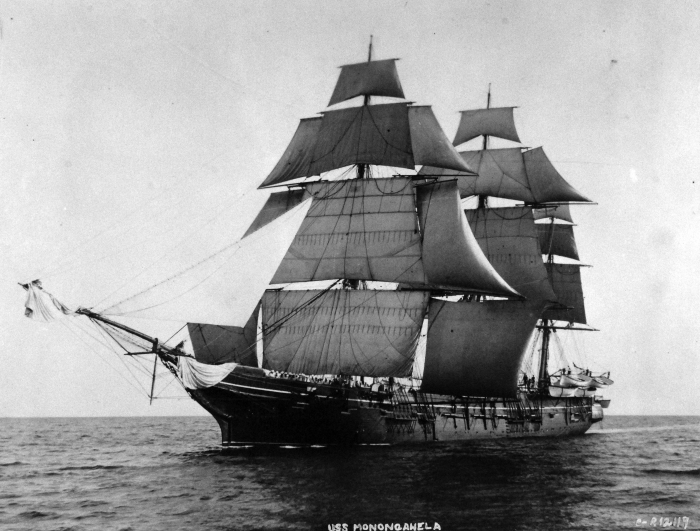 The USS Monongahela in the 1890s, when it was used as a Naval Academy practice ship (National Museum of the U.S. Navy)

One of the servants of Dr. G.W. Murdock found a baby boy, neatly dressed with a bottle of milk at his side, abandoned on the stoop of the home at about 10 p.m. on a Saturday night. The Town Board appointed a committee to investigate.

In response to a questionnaire from the New York World, Rep. Jacob LeFever, whose district included the Highlands, said he opposed an income tax.

Mrs. Edwards Pierrepont, along with her servants, coachmen, horses and carriages, arrived from New York City to spend the summer at Hurst-Pierrepont, her Garrison estate.

Amid a bicycle craze, the Recorder opined that riders, usually women, who “double up the body while riding deform the human shape, present a most ungraceful appearance, invite spinal disease and lose a great part of the benefit that would otherwise accrue from the exercise.”

Two men from Garrison rode their bicycles to Coney Island.

The Board of Education voted to spend $20 on graduation ceremonies.

The body of a man, about 40 years old, was found in the Hudson near West Point. He was well-dressed and had a new revolver and a certificate issued by the Cornwall Gold Cure to James McNally.

J. Bennett Southard, 20, of Cold Spring, received his diploma from the Columbia Law School in a ceremony at Carnegie Hall. [Three years later, Southard was appointed Putnam County district attorney. He later was a county judge for 27 years.]

Members of the Garrison Female Suffrage Club met over tea at the home of Mary Austin to dissect a speech by an Episcopal bishop at a girls’ school in Albany, during which he ranted about how tired he was hearing about “a woman’s rights.”

Workmen tapped the main pipe from the reservoir at the depot and extended a line across the tracks so the engineer could sprinkle the flower beds. 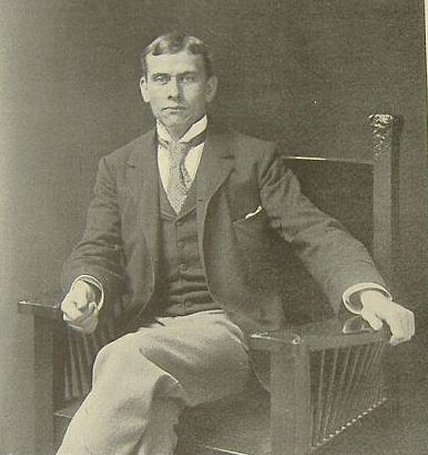 Word arrived of the death in Africa of E.J. Glave, 31, who three years earlier had delivered several lectures at the Haldane Union School. The Englishman had been sent to the Congo (then controlled by Belgium) by The Century Magazine to write about the slave trade.

At a meeting of the Cold Spring Village Improvement Association, President Henry Metcalfe reported the association had planted 64 trees, placed drinking cups on all the pumps, ordered wastepaper bins similar to the one outside the post office and built a crematory at the dump on Sandy Landing to burn rubbish.

Thomas Donohue was killed by a northbound train while walking through Breakneck Tunnel after he jumped out of the way of a southbound train.

Noting that village residents had complained about a man who was opening their shutters at night to peek inside, the Recorder vowed to publish his name if he was caught again.

Two village justices and two magistrates recused themselves from overseeing the arraignment of Frank Brown, who had been arrested on a complaint of assault brought by James and Lillie Horton. Each judge said he was related in some way to the Hortons. The officer who made the arrest contacted two justices in Putnam Valley who said they were also relatives. Finally, at 10 p.m., he found a judge in Kent to arraign his prisoner. A jury later found Brown not guilty.

Charles Scofield of North Highlands planted 4 acres of cucumbers to meet the demand for pickles.

The Recorder noted its disapproval of “floating saloons” anchored a short distance from the western shore of the Hudson. Customers were taken in boats to the scows to drink, then “sent ashore to sleep off their jag and fight and disturb the peace.” It noted that, on a single Sunday, one boat went through 31 kegs of beer. 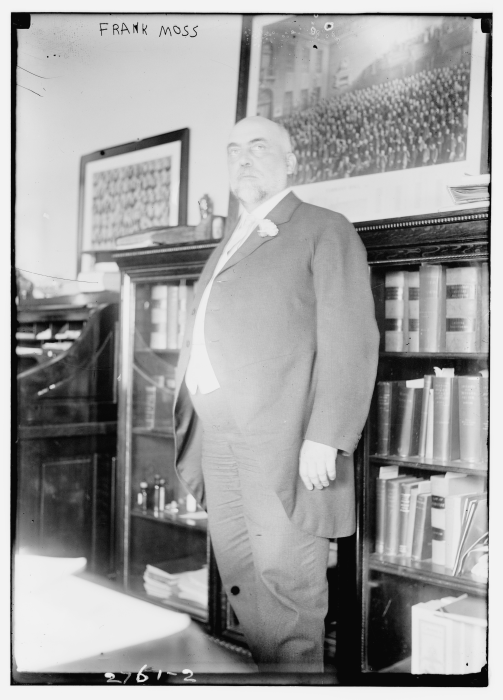 Frank Moss around 1915 (Library of Congress)

Frank Moss, a Cold Spring native who became a celebrated crusader against graft, died at age 60 at his home in New York City. As a young lawyer, Moss was named general counsel to the Society for the Suppression of Crime and later was an adviser to the Lexow and Mazet committees, which investigated police corruption. In one of his last speeches, Moss said: “Many a man who has started out to expose graft in some official circles has lost interest when some police or other official has whispered quietly in his year. Even ministers of the gospel have been known to have been so affected. I fear then that it is pretty nearly true, as a saloon keeper once said to me, that every man has his price.”

Ellen Repp, a contralto who toured with the USO, performed for 600 people at the 7th War Bond Rally held at the Haldane Central High School. The program also featured a screening of 50 feet of motion-picture film taken from the plane of Lt. Martin Adams of Nelsonville as it strafed a truck convoy in Germany and scored a direct hit on an enemy fighter plane. [Adams, 25, had been killed in action the previous year.]

Sgt. Joseph Etta was honorably discharged and returned home after 35 months of duty in which he participated in major campaigns in Algeria, French Morocco, Tunisia, Sicily, Normandy, Northern France, Central Europe, the Rhineland and Ardennes. He was greeted at Grand Central Station by his brother, Staff Sgt. Anthony Etta, who had arrived home seven days earlier after being liberated from a German prison camp. [Joe Etta turned 102 in April.]

Mayor William Dardess Jr. urged residents to plant a Victory Garden to provide food for the winter, noting that the gardens accounted for 20 percent of the fresh vegetables grown in the U.S. in 1944.

A week after the sloop Clearwater visited Cold Spring, a resident complained in a letter that “local yokels” had cut its lines, thrown beer cans and stones, and accused Pete Seeger and his crew of being Communists, without recourse.

Spec. 4 Wayne Robinson of Nelsonville returned home for a 30-day leave after completing the first year of his tour of duty in Vietnam.

The Rev. James Edge, who was pastor of the First Presbyterian Church of Philipstown from 1926 to 1940, died in Portland, Oregon.

Esther Mekeel retired from Haldane after 47 years of teaching there. At graduation, she received a bouquet from members of the Class of 1923.

The Philipstown Volunteer Ambulance Corps, in its fifth year, purchased an ambulance with four-wheel drive.

The Democratic County Committee, unhappy that members of the breakaway Concerned Democrats of Putnam County who represented Philipstown and Patterson were going to join the committee, voted with 19 of 106 members present to eliminate the two seats. It argued that election law didn’t say it couldn’t abruptly change the number of seats on the committee, but a state judge ruled that “such an interpretation would outrage fundamental fairness and result in absurdity.”

The Philipstown Board of Assessors reported the state had lowered the assessment of the Penn Central by 24 percent because of a loss in revenue by the railroad.

The Omega Chemical Corp. plant on Kemble Avenue burned to the ground in an overnight fire. Chief Joseph Etta said that because of the chemicals in the building, the 200 firefighters from four departments on the scene could not get near the blaze. The plant manager and its seven employees resumed operations in a Quonset hut constructed about 1,000 feet away.

State Sen. Vincent Leibell announced he had secured $175,000 to replace the bridge over the Metro-North tracks at Little Stony Point, which the state had deemed unsafe and ordered demolished. Soon after, it was noted that while the funds had been appropriated, they had not been “released.”

Following a six-week investigation by the Putnam County Sheriff’s Department, a 20-year-old Philipstown man was arrested for selling undercover officers a half pound of marijuana.

The Advanced Art class at Haldane High School worked with the Garrison Art Center to paint murals on the entrance of the train underpass on Main Street.

A Wappingers man was arrested after a canceled check with his name was found in a pile of garbage and furniture dumped along East Mountain Road South.