Dutchess County is attributing an uptick in the number of daily new COVID-19 cases to expanded testing of inmates at the Fishkill and Green Haven state prisons.

Active cases of COVID-19 reached 232 as of Thursday (Aug. 6) after dipping as low as 169 about a month earlier. Dutchess has averaged about 16 newly confirmed infections out of 1,274 total tests a day since July 29 after averaging eight new infections out of 1,008 tests per day during the previous two weeks. 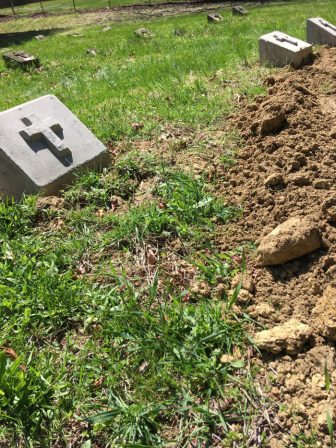 Graves were dug at Fishkill Correctional Facility on April 15 for two inmates who died of complications of COVID-19 at other prisons and whose remains were not claimed. (Photo from Beacon Prison Action)

Dutchess County Executive Marc Molinaro said the jump in daily confirmed cases can be attributed largely to “more aggressive” testing of inmates at Fishkill and Green Haven. “There may be days where you see a bit of a jump,” he said during his weekly Facebook town hall on July 29.

Fishkill and Green Haven this week allowed visitors into the prison for the first time since the March shutdown, but the state would not say if that played a role in its increased testing beyond that it was “targeted.” It said inmates are tested if they show symptoms, and that those who test positive are isolated.

There have been 64 new confirmed infections among prisoners at Fishkill and Green Haven since July 19, the county said on Monday. The Fishkill facility has had more infections than any other state prison in New York, with 103 as of Wednesday. Five inmates have died, also the most of any facility.

Green Haven has the second-highest number of COVID-19 cases among prisons, with 74 as of Wednesday. Three of the inmates there have died. Downstate Correctional Facility in Fishkill, which has had one case, is not part of the expanded testing, according to the county.

During the first two weeks of April, the high point for cases in New York, the state was confirming an average of 107 infections each day among Dutchess residents. The county averaged about 10 positives a day in June and about six during the first 12 days of July, according to the state Department of Health.

On July 13, the state reported 38 cases, a significant jump. About two-thirds of that figure represented false positives at a nursing home and inmate infections, Molinaro said.

New cases in Ulster averaged 28 a day between July 27 and July 29, according to state data, after averaging about five each day over the previous two weeks.

Pat Ryan, Ulster County’s executive, told The Daily Freeman in Kingston on July 29 that state prison officials “decided to proactively test a subset of all of the inmates,” which he felt would “make everyone a lot safer, including in the community.”

As of Monday, state prison officials reported that they had confirmed infections in 1,311 employees and 604 inmates statewide. Seventeen prisoners and five staff members have died.

Elected officials and inmate advocates have, for months, been urging the state prisons to ramp up testing.

On July 20, the Beacon City Council approved a resolution asking the state to test every inmate and staff member at Fishkill, in addition to taking other measures to prevent the virus from spreading, and to release elderly and medically vulnerable inmates.

“Finally, they’re starting to do a reasonable amount of testing,” said Laurie Dick of Beacon Prison Action, a grassroots group that pushed for the resolution. “Given the density of these facilities, and the inability to keep people socially distanced, they should be testing everybody on a regular basis.”

Dick is also the founder of Beacon Prison Rides, an initiative in which volunteers give free rides to family members visiting inmates at area prisons. Visitations, which had been suspended during the pandemic, resumed this week, with mask and social-distancing requirements, and temperature checks of those coming to see inmates.

Dick said on Tuesday (Aug. 4) that Beacon Prison Rides had a trip scheduled to Shawangunk on Thursday, rides to Fishkill and Green Haven on Saturday and two trips to Green Haven early next week.

“We’re already starting to fill up,” she said. “These are family members who’ve been waiting, checking on a daily basis, because they’re so worried about their loved ones.”

One thought on “Why the Jump in Dutchess Cases?”