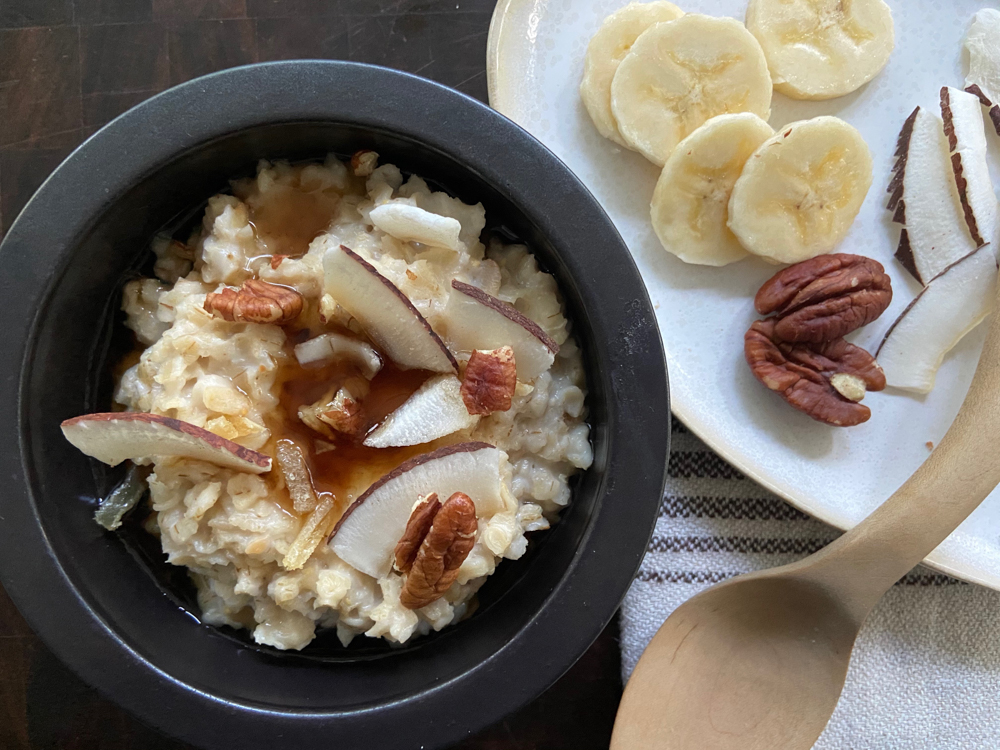 About a dozen years ago, when our three children were still little, we took a trip along the northwest coast of Scotland. My grandfather had grown up in Edinburgh, and I’d long been drawn to the country’s brooding landscapes and tarnished-silver sunlight. I was thrilled to finally be sharing it with my family. We hiked crags, wandered cobbled streets and splashed around in the frothy sea. Yet the memory I revisit most often from that trip is of a bowl of oatmeal.

“Do you remember the oatmeal we had at the Love Croft?” I recently asked my husband, Peter.

OK, so no. He didn’t even remember the place, at first. To be fair, it wasn’t fancy. Croft is an old Scottish word for a one-family or tenant farm. And Love, in this case, was the proprietor’s family name and not a funky B-52s reference. The Love Croft was — still is, per the internet — a sweet, humble bed-and-breakfast in a sweet, humble village called Laide.

But oh, the breakfasts: Not humble. Not even close.

The oatmeal that made such an impression was one of three options for the meal’s first course, and was followed by a choice of second courses, among them:

Scrambled eggs with Isle of Ewe smoked salmon and toast;

It’s a wonder I lived to remember the oatmeal at all, which I’m pretty sure was cooked with cream. For that matter, it’s a wonder the Scots have survived into the 21st century given their idea of breakfast. Anyway, I suspect the cream is what secured that porridge’s place in my personal museum of food memories, though the oats themselves were delicious, too; they tasted freshly milled.

Yet even decent supermarket oats have a naturally sweet, nutty flavor that blossoms if you cook the grains with a little dairy. No cream necessary, you and your doctor will be happy to hear, just equal parts water and milk or alt milk if that’s how you roll. Preparing oatmeal this way results in a bowlful so comforting that few toppings are needed.

Still, toppings are the reason many people bother eating oatmeal at all. For my children, equal parts brown sugar and oatmeal by weight was once the goal. My mother, a Finn, says she grew up having oatmeal for breakfast every morning, “but the Finnish custom was to have a butter eye.” I got her meaning, despite this latest example of the idiosyncratic liberties she takes with her adopted language, because she used to nestle a little pat of butter into the top of my oatmeal when my sisters and I were kids. It would melt to form a golden pool — the “butter eye” — into which we would gently dip each spoonful of porridge after scooping it from around the bowl’s edges.

I remember loving this careful ritual, but the flavor must not have been all that grand because I dropped the custom.

What I have kept up, adapted or invented (I’m not sure which) is a variation on oatmeal I once made at summer camp that includes coconut milk, pecans and ginger-infused maple syrup. I make it on those mornings when I want something a bit more luscious and love-crafted than the back-of-the-package recipe, and a wee bit healthier than that long-ago oatmeal of my dreams.

You can infuse the maple syrup the night before for a stronger ginger flavor. Canned coconut milk doesn’t keep long in the refrigerator. If you don’t plan to use it soon, transfer the remaining milk to a resealable bag and freeze for up to six months.

Optional toppings: coconut chips (see recipe below, or use one of the snack brands such as Bare or Dang), sliced banana, chopped candied ginger

Combine the syrup and ginger in a teacup and warm in the microwave, or heat to a bare simmer in a small saucepan on the stove. Remove from heat and set aside to allow flavors to infuse.

Prepare oatmeal according to package directions, replacing half the water with coconut milk, and adding a smidgen extra sea salt.

Meanwhile, toast the pecan, if desired, in a 325-degree toaster oven. Prepare toppings. Serve oatmeal hot with ginger-maple syrup on top and toppings alongside.

Heat oven to 275 degrees. Melt the coconut oil in the microwave or in a small saucepan over low heat. In a large bowl, toss together the melted oil, coconut flakes and salt.

Spread on a rimmed baking sheet, transfer to the oven, and bake 10 to 12 minutes, stirring every 2 to 3 minutes; more frequently toward the end. Watch closely: the chips can go from toasted to burnt very quickly.

When golden brown, transfer to a paper-towel lined surface to cool. Store in an airtight container for up to two weeks.