Gyms struggle as clients exercise on their own

Gym owners around the state launched a vigorous lobbying campaign — as well as a class-action lawsuit — before Gov. Andrew Cuomo’s administration allowed them to reopen as of Aug. 24, five months after the shutdown began.

But three months later, local gyms are struggling to get clients to return and facing a winter when the virus is expected to surge as people are forced indoors by the weather. During the shutdown many of their clients purchased their own fitness equipment and have continued working out at home.

Zoned Fitness in Beacon and Cold Spring Fitness in Philipstown dropped group classes to focus on private training. Keith Laug, the owner of Zoned Fitness, located on Main Street, said this week that his schedule was about 70 percent full, enough to pay the bills.

Business at Cold Spring Fitness is down 90 percent from a year ago, said owner Dawn Scanga. She reopened on Oct. 1 but said many of her clients are older and hesitant to work out indoors.

“It’s been a struggle to just pay my rent,” said Scanga, who has sublet half of her space to Flex Physical Therapy. “People aren’t as eager as I thought they would be to come to the gym. If it doesn’t start opening up, it’s not going to be sustainable.” 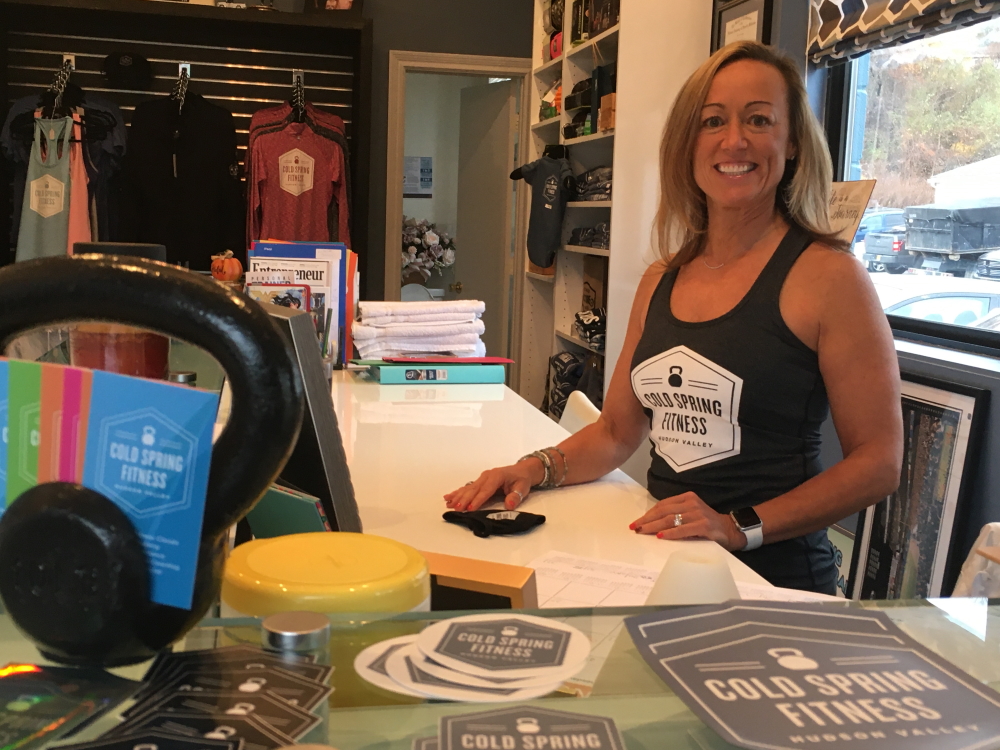 Dawn Scanga, the owner of Cold Spring Fitness on Route 9, reopened on Oct. 1 but is struggling to keep her business going. (Photo by L. Sparks)

Preparing to reopen involved “redesigning our entire business model,” she said. “We had to figure out 33 percent capacity for physical distancing and we had to close the shower. All our trainers and instructors are wearing face coverings and maintain 6 feet distance.

“We needed to install a new air-handling system to meet [state] standards; disinfect every surface while documenting the time and scope of cleaning products; post signage and complete the safety plan, including daily screening conducted for employees plus members, with a log of everyone who enters, including a designated site safety monitor to ensure compliance.

“We were pushed so far and expected to comply with so much,” she said.

Scanga said she surveyed her members and found they had two concerns: working out while wearing a mask and exercising indoors.

Laug said he has gained a few clients who belonged to larger gyms but felt more comfortable exercising in a private space. Both he and Scanga hope the winter months will bring more people indoors when outdoor classes end.

“I do see a lot of people, though, sticking with what they did when we shut down — doing a lot of home training,” said Laug.