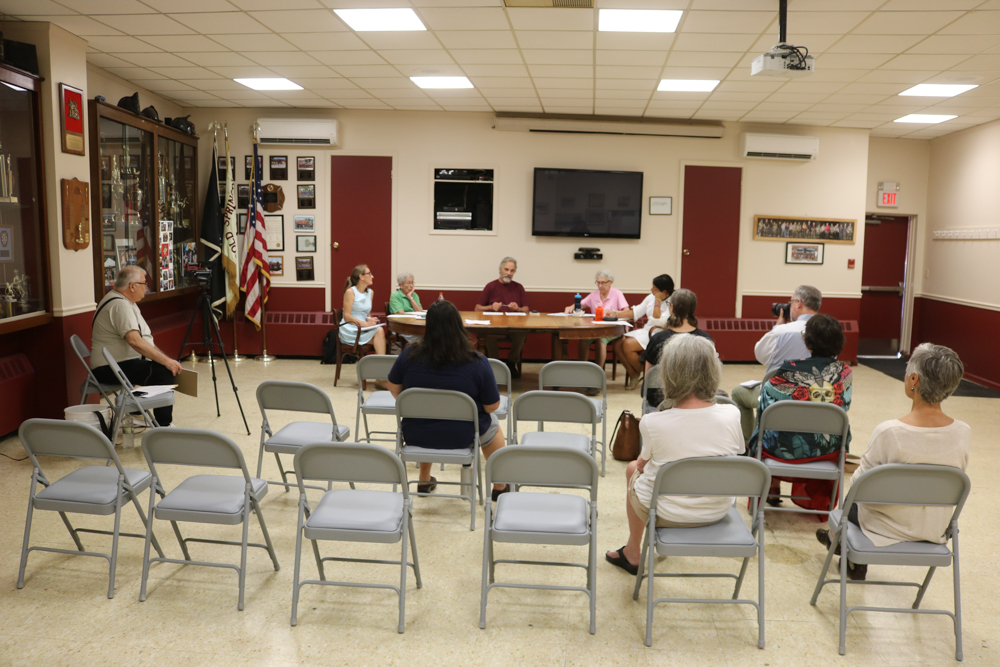 A public hearing on Tuesday about whether Cold Spring should allow marijuana sales drew only a small audience. (Photo by M. Turton)

Cold Spring ‘opts out,’ while Philipstown mulls it over

The five members of the Cold Spring Village board on Tuesday (July 20) voted unanimously to opt out of New York State laws regulating retail outlets for the sale and consumption of legal marijuana.

Earlier this year, New York legalized recreational use of cannabis this year for adults 21 and older, who can possess up to 3 ounces. While the state plans to license shops that sell marijuana or allow on-site consumption, it allowed towns and villages to opt out by Dec. 31 of permitting such establishments within their borders. Those that opt out can allow the establishments later. Those that “opt in” through inaction cannot later ban sales.

Local residents can petition to have the question placed on the ballot through what is known as a “passive referendum.” However, the Village Board voted to create a “permissive referendum” that will put the issue on the Nov. 2 ballot without a petition.

“There will be a larger debate later on,” Merandy predicted, adding that Cold Spring could benefit from studying the experience of states such as Massachusetts, which legalized sales in 2016.

There was little smoke and no fire at the July 15 public hearing on whether the village should opt out. Held at the firehouse, the hearing drew only a handful of residents and concluded 11 minutes after it began.

Eliza Starbuck, a candidate for village trustee, asked if Cold Spring would have control over marijuana establishments if it opts in later.

“The village would be able to determine where they would be located and how many” through zoning laws, Merandy said.

After Starbuck asked for clarification regarding the sales tax benefits, Trustee Kathleen Foley said sales would be taxed at 4 percent, on top of the regular state sales tax. “Twenty-five percent [of the 4 percent] is retained by Putnam County,” she said. “Seventy-five percent goes back to the municipality” where the sale occurred.

“It’s the one tax under state law that the county has to share with us,” Foley said.

Tara Vamos, who lives in the village, spoke in favor of allowing sales. “It would be a great asset to have a dispensary in town,” she said. “Getting back that sales tax would be tremendous.”

Earlier this month, the three members of the Putnam County Legislature’s Health Committee wrote to town and village leaders suggesting they opt out. Their letter cited a study published this year that found home prices within a 36-mile area in Washington state of a new dispensary fell by 3 to 4 percent on average.

Vamos disputed that report, pointing to a 2017 study that found homes in Denver located closer to dispensaries increased in value by about 8 percent after cannabis sales became legal in Colorado in 2014. She also disputed findings that dispensaries lead to increased use of marijuana.

In letters to the village, two people wrote in opposition to allowing retail sales. Evan Hudson argued that opting out “will help to maintain our quality of life in Cold Spring,” while Danielle Pack McCarthy, executive director of the Philipstown Behavioral Health Hub, said that opting out gives Cold Spring the opportunity to see how things unfold in other municipalities. Doing otherwise, she argued, would send a message to youth that smoking marijuana is OK.

“I see many young people who come in with serious marijuana dependency,” Pack McCarthy wrote. “Easy access would likely increase these numbers.”

As the Philipstown Town Board last week began considering whether to allow retail marijuana sales and on-site consumption, two members declared their support for opting out. And all those present expressed reservations about “opting in” without more research and public input.

At a July 14 workshop at Town Hall, the board discussed the issue with its attorney, Stephen Gaba.

Gaba explained that unless the town opts out, “the state says you irrevocably lose the right to have a law” that would ban retail sales, Gaba said. Beyond opting out, “there’s not that much that municipalities can do.” If it allowed sales, a municipality could amend its zoning code to limit them to certain areas.

Board Member Jason Angell suggested a municipality could permit lounges where marijuana is consumed, but not retail sales, or vice versa.

Pack McCarthy, of the Philipstown Behavioral Health Hub, shared the same message with the Town Board that she made in a letter to the Cold Spring Village Board, warning that “the easier the access, the more likely young people are going to use it. I’d just caution, regardless of the decision, the messaging to young people has to be so strong” to ensure they are informed of the risks.

The only benefit of accepting marijuana sales seems to be the 3 percent sales tax income that the town would receive, said Member John Van Tassel. “We’re not talking about a windfall here.”

“It’s a complicated topic,” said Supevisor Richard Shea, who predicted that Beacon, Peekskill and Fishkill would allow retail sales. If Philipstown officials “say that we’re not going to have it here, we also have to be aware that we’re passing up a revenue stream. It’s a funny situation to say we’re going to tax and make money on something that a lot of people see as a problem.” Yet, he reasoned, “you’re not going to preclude anybody from buying marijuana. People are going to get it. They’re going to smoke it.”

Shea added: “We want to have a townwide discussion. If we opt out, it’s on the public” to demand a referendum.

He said state government “loves” gambling, alcohol sales and marijuana “because they’re cash cows. Money: It does drive politics. It’s tempting” also to use the tax revenue to fund projects, he acknowledged. However, he revealed, “I’m leaning toward opting out. I’m not comfortable with making money off vice.”

“I’m not comfortable with that [either],” Van Tassel said. “I’d also side with opting out.”

The original version of this post stated that the Cold Spring Village Board had passed a resolution "opting out" of a state law that will allow the retail sale and onsite consumption of marijuana. When a local municipality does this, one option for residents is to gather signatures for a “passive referendum” that would allow voters to overturn the board decision. However, state law also allows a village board to send the issue straight to the ballot without a petition, which is known as a "permissive referendum," and that is what the Cold Spring board voted to do. This has been corrected in the article.