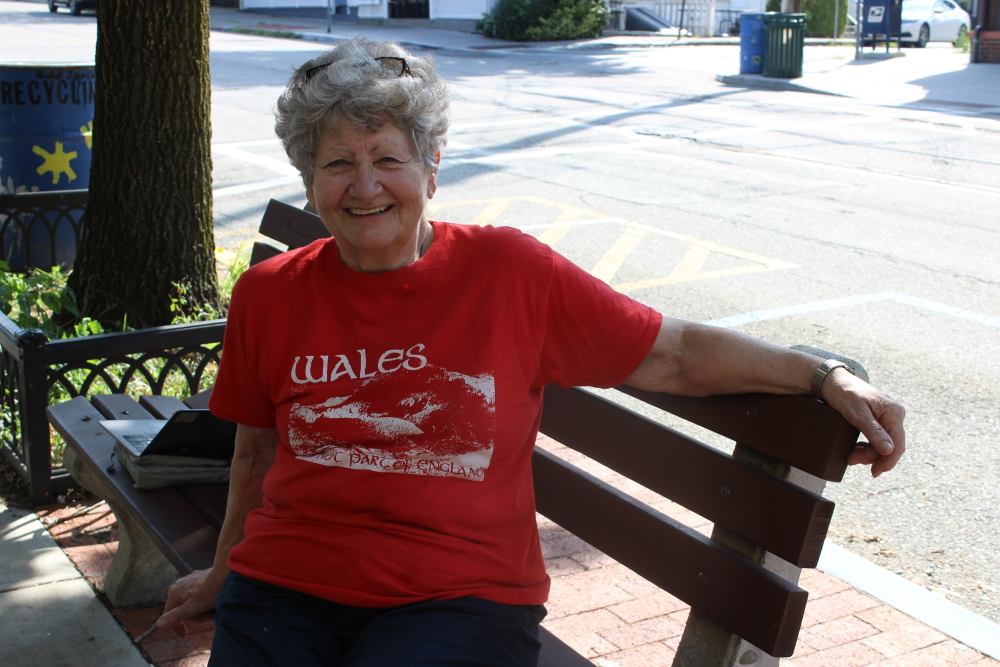 Leonora Burton outside her Cold Spring shop (File photo by A. Rooney)

After 40 years in Cold Spring, Country Goose for sale

Leonora Burton, proprietor of Cold Spring’s Country Goose, who has served as an oracle of Main Street, holding forth and spreading the word on the street since 1985, announced on Monday (Jan. 17) that she plans to close her shop on March 31 and return to the U.K.

She said she decided to return to the U.K. after her brother-in-law died in England from COVID-19 in 2020.

“My sister at that point said, ‘Let me know, you can move in with me,’ ” Burton said. “She lives in a lovely house in Putney, in south London, near the Thames. My son, daughter-in-law and my two grandchildren, Eliza, who is 18, and Betsy, 12, live 10 minutes away. Eliza just started college. I missed them growing up, and want to be there for them now, to give them my pearls of wisdom.”

She noted she has been in business for nearly 40 years, “so it’s time to go back home. I have three sisters, there’s just 4½ years between us and I’m the youngest; we all get on, which is great.”

Burton and her late husband, Tony, and children moved to Cold Spring from New York City in 1985. Two years later, a woman whom Leonora knew through her twin sons’ baseball team asked if she’d like to buy her business, a kitchenware store on Main Street.

Despite not having a whit of experience in retail, Burton decided to give it a go. She moved the store across the street in 1989 to 115 Main St., where it operates today, filled with gifts for kitchen and bath, candles, coffee and British goods — including the strategically placed chocolates by the register nook where Burton holds court — and continues to draw tourists and devoted locals who rummage through the shelves before having a chat with the proprietress. 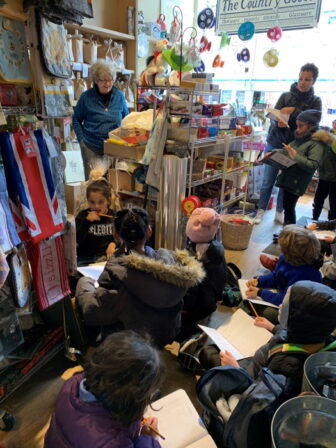 For years, second-graders from the Brooklyn Charter School transformed The Country Goose into a classroom as they conducted research for reports on rural transportation. (File photo)

Burton’s accent and exuberant displays of Welshness betray her roots. Burton grew up in Newport, Monmouthshire, and made her way to London where she worked in the film and television industry, including at Warner Bros. as its director of subsidiary rights. A two-year job posting as publisher of a Warner-owned magazine, Coronet, lured her to New York for an adventure. There she met Tony, an Englishman working as a journalist for the New York Daily News.

Her two-year American adventure turned into marriage and twin boys Robert and David. While taking time off to raise them, Burton started writing the first of what are now 11 romance novels set during the British Regency period of the early 19th century.

“I started reading them, as I always loved that period, and I thought I could do better,” Burton recalled in a 2015 interview with The Current. “I wrote them while the boys were sleeping.”

Her first book, Lady Tara, published in 1978 under the pen name she still uses, Leonora Blythe, prompted five letters of complaint to the publisher about a passage in which she reported that a character’s “manhood” had “stirred.”

In 1983, when her boys were 5, Tony’s mother needed to come to the U.S. to live with the family, and they were pressed for space in the city. The Burtons developed  criteria for a new home: a village with a school that had at least two kindergarten classes (so the boys could have some independence from each other) and an easy commute. This brought them to Cold Spring, where they lived on Rock Street, and later to Garrison.

Burton initially ran The Country Goose with a friend, Ruth Eisenhower, who worked the register on weekends. Specializing in high-end kitchenware, the store was a draw for those unable to find items such as Calphalon and Bodum products, which hadn’t yet established a foothold in department stores.

“It was a good business, and then Walmart opened, and overnight the business died,” Burton said. It was saved by an ad Burton saw for a gift-basket seminar. “Ruth and I went off to Boston to learn, and we came back and formed Highland Baskets.” 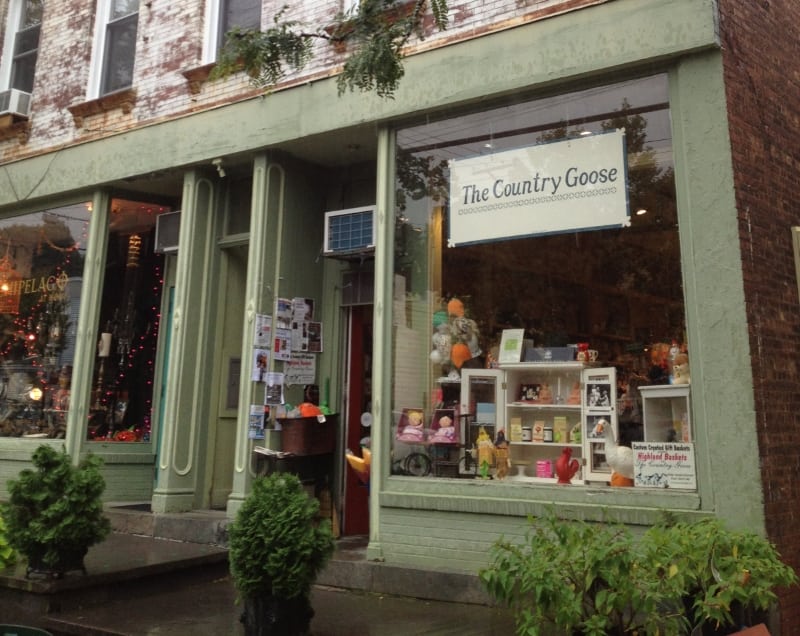 The Country Goose has lasted through the vicissitudes of time and the comings and goings of other businesses on Main. “When we came in, we were carpetbaggers and we were met with resistance,” Burton said in 2015. Things changed when an auction hall opened and antique dealers followed, filling the storefronts. That became the identity of Main Street for many years, she said, although the “retail spirit” is returning. “It’s essential for businesses to appeal not only to tourists but locals,” she said, “especially as business is so dependent on the weather in the winter.”

Tony died in 2018, and it was then that Leonora started to consider returning to England. “It’s been in my mind since then,” she says. “That’s when I thought: ‘That’s it.’ And everyone in England would say: ‘You’ve got to come back.’”

She decided to try to sell the business last year, with a goal of closing at the end of 2021, then extended the deadline for a few months, before giving notice to her longtime landlord, whom she calls “very kind.”

“I don’t really want to go, but I do,” she said. Not surprisingly, to anyone who has spent any time in the shop (meaning the vast majority of Philipstowners), she said she will miss “the people coming in to say hello, to talk about things — nothing malicious, more a little community center, where people can be free to talk about anything they want to talk about.

“I’ll miss the doggies wanting to come in for a treat. That would be the thing: if anyone wanted to come in to take over this business they have to love dogs.”

Burton’s own beloved Lab, Tara, was a fixture on the bench outside the shop, and also somehow penned local newspaper advertorials, cunningly disguised as witty columns; a never-proved rumor has it that they were written by Tony. 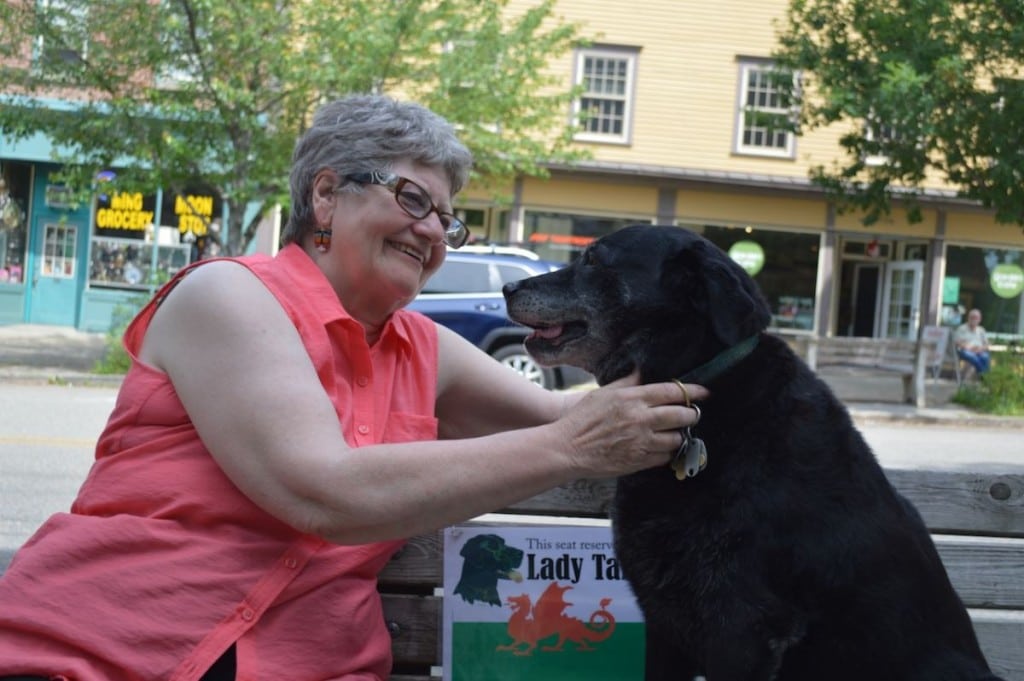 Burton said she hoped to find someone to continue The Country Goose, and that still could happen, but she knows from experience it’s unlikely.

“People have to know what they’re in for,” she said. “People want to have a store, but have no idea how to run a store. For them to rise to the challenge, they have to be themselves. I’m myself, and some people don’t like me and walk out of the store, annoyed by me, but most people do.

“Through the years I’ve come up with things to draw people in: the coffee and tea clubs, letting kids come in and charging them less; all sorts of things to get people in.”

As a Main Street fixture, Burton now greets people who bring their children in who’ve been popping in since they were children. “People love to chitchat, kids come in, muck around,” she said. “We have a nice play space right outside where kids can be rude to people walking down the street! You’re a big part of the community here.”

For those who will miss The Country Goose’s annual St. David’s Day celebration in honor of the patron saint of Wales, not to worry. The shop will celebrate it early this year, at the end of February, rather than March 1.

There’s much to look forward to in England, as Burton notes: “Just messing around with the grandkids, being nasty to my sisters again. I know a lot of their friends. We take the dogs to Richmond Park, we sit and gossip for three hours while the dogs run around.”

And it’s not like she won’t be making regular trips to her “other home” in New York, where friends here will always have a place for her to stay, and to Florida, where one of her sons lives. Still, she conceded, “it’s a tough decision for anyone to make.”

The Country Goose will be open through the end of March, and everything will be on sale until then, though it is likely that most of the local customers will shop as they always have: spending 95 percent of their time chatting with Burton, then adding a bit of shopping.

Of this account of her nearly 40 years living and owning a shop in Cold Spring, Leonora said: “It’s all true; just make up what you want.”

13 thoughts on “Leonora is Leaving”