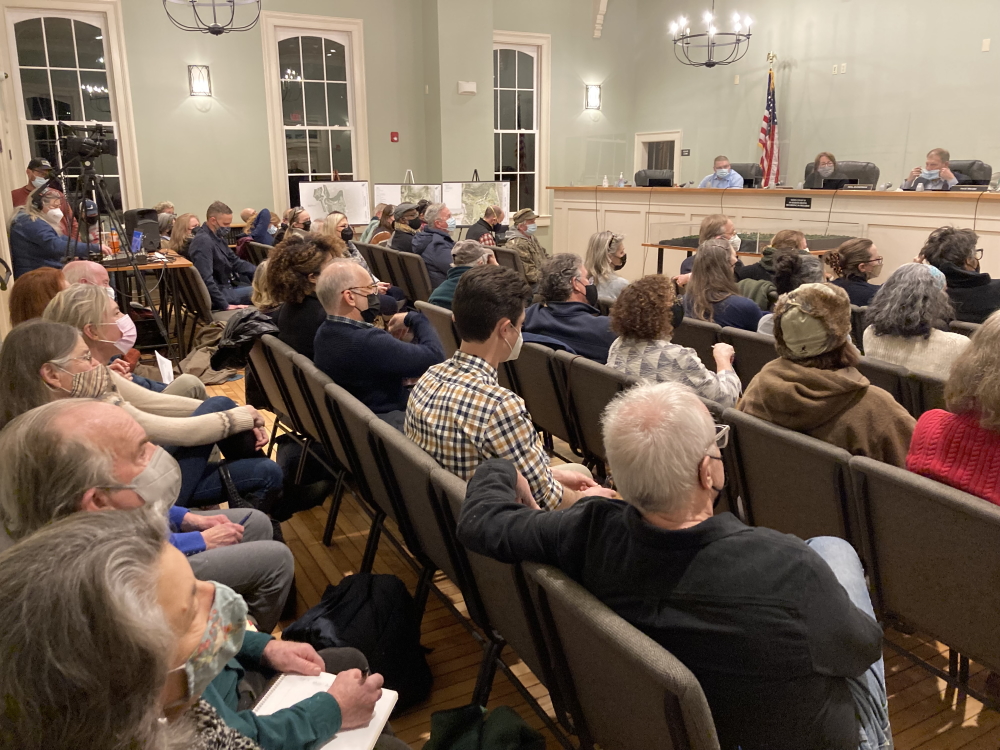 There was a full house at a public hearing on Jan. 27 concerning plans for the former Garrison golf course. (Photo by Leonard Sparks)

Some see environmental stewardship, others a threat

Philipstown residents last week filled Town Hall and Zoom screens and debated a proposal by the Hudson Valley Shakespeare Festival to transform the former Garrison golf course into a theater and cultural campus.

They were participating in a public hearing convened Jan. 27 by the Philipstown Planning Board, which is conducting a state-mandated environmental review of the plan to create a permanent home on 97 donated acres bordered by Philipse Brook Road, Snake Hill Road and Route 9.

The Planning Board’s job “is to balance community rights with property rights,” said Neal Zuckerman, who chairs the panel. “I’m glad we’re here. We’re able to have the public weigh in. It’s a core part of our democratic process.”

Nearly 40 residents addressed the board. After three hours, two dozen still wanted to comment, so the board scheduled another session for Feb. 17.

If the board issues a “negative declaration,” meaning it finds no potential harm to the environment, HVSF still must submit site plans and get approval from the Town Board to change the property’s zoning to allow for performances.

Last month, Supervisor John Van Tassel said he would issue a permit for HVSF to erect its existing tent on the site for the 2022 season. The troupe previously used the tent for summer performances at Boscobel, its base for more than 30 years.

Along with installing a year-round tent, HVSF’s long-term plans for the new site include an indoor theater; actors’ housing; a visitor center-box office; outdoor pavilion; backstage structure; 20-room hotel (half the size of one permitted under the golf club’s 2005 zoning); retention of a restaurant and banquet hall; paths; picnic lawns; a restored natural landscape; parking; and reconfigured entrances from Snake Hill Road and Route 9, with a possible traffic light at the intersection. 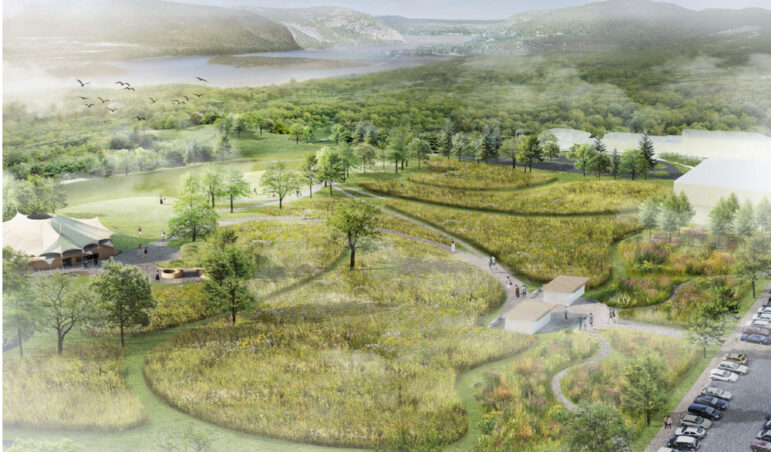 The Hudson Valley Shakespeare Festival plans in 2022 to move from its location at Boscobel to land that was part of The Garrison golf course.

Chris Davis, who gave the golf course to HVSF, is also donating about 74 acres to the Hudson Highlands Land Trust (which has received 57 so far), while keeping a 27.5-acre private parcel. “We have the opportunity to substantially protect this land” through the HVSF and HHLT partnerships, he said Jan. 27.

The golf course was unlikely to continue indefinitely, some residents observed. “Something is going to happen there, and this is the best of all possible” options, said Claudio Marzollo, of Lane Gate Road, near Nelsonville. (A century ago, an athletic training center for wealthy men occupied the site.)

“There’s a reason we live in one of the most beautiful places in the world: The people, like those proposing this project, who have striven to conserve the natural beauty, to balance conservation with public access to recreation and the arts within these natural surroundings,” said Fred Martin, of Garrison, who recalled joyful outings on the golf course. “The fact so much of this space will still be conserved, still be publicly accessible, albeit in different recreational and artistic circumstances, makes me grateful.”

Allison Pataki of Garrison, too, praised HVSF and HHLT as organizations that “value the beauty of the town.” She also termed a traffic light “essential” at the Route 9-Snake Hill Road intersection, where “horrific accidents” have occurred.

Nelsonville resident Erin Muir and Tara Vamos of Cold Spring lauded HVSF’s plans for transforming golf greens into meadows. A landscape architect, Muir noted that typically “there’s 4 to 7 pounds of pesticides and herbicides put on golf courses per acre. We need to do right by this piece of earth that we have really been hurting the whole time it’s been a golf course.”

A natural landscape “will be a huge improvement over what we have” now, Vamos concurred.

Jeff Mikkelson, a Cold Spring Chamber of Commerce leader and village resident, said the chamber — a group “very much against large-scale commercial development; very much in favor of land and water conservation” and preserving community character — concluded that “this is a great project for the environment, the community and the local economy.”

Richard Butensky, of North Highlands, said HVSF’s plans mesh with Philipstown’s latest comprehensive plan, which he helped draft. “I can’t see a more environmentally sensitive use of this property, and a better use for the community,” he said. “The Shakespeare Festival has proven over the decades to be a good neighbor.”

Retired actor Peter Maloney, who lives across from Boscobel, declared he “never had a problem with noise, vandalism” or anything else from HVSF productions.

However, some Garrison residents expressed misgivings about what HVSF could do going forward.

“We’re concerned this will bring great change to the whole neighborhood,” said Jack Dickerhof, of Travis Corners Road, a golf course neighbor. “Too much is being planned for that relatively small place.”

Patricia Berwald focused on use of Snake Hill Road, across from her house, for access. “Why does the entrance have to be there?” She also said that with a stoplight, trucks “will have to rev down and rev up” at the Snake Hill-Route 9 intersection. “It’s just got to get a lot more noisy,” she said. Berwald suggested the traffic light only function during HVSF performances.

“My biggest concern is what happens to our neighborhood,” said Stephen Wallis, of Philipse Brook Road. At present, his view consists of “just woods,” he explained. But HVSF wants to construct actor housing. “All of a sudden, we’re looking at having transient actors in front of us, not owning property, with no skin in the game,” he said. “I fear that Garrison as we know it might be destroyed,” with its residents “the forgotten ones. We’ll be collateral damage to a huge commercial development.” Thus, “the residents of Garrison are counting on” the Planning Board “to have our back,” he emphasized.

Joe Regele predicted HVSF’s project “is going to have a negative impact on the taxpayers of Garrison” and warned that a traffic light may only spur drivers to speed to get through the Snake Hill-Route 9 intersection to beat the red.