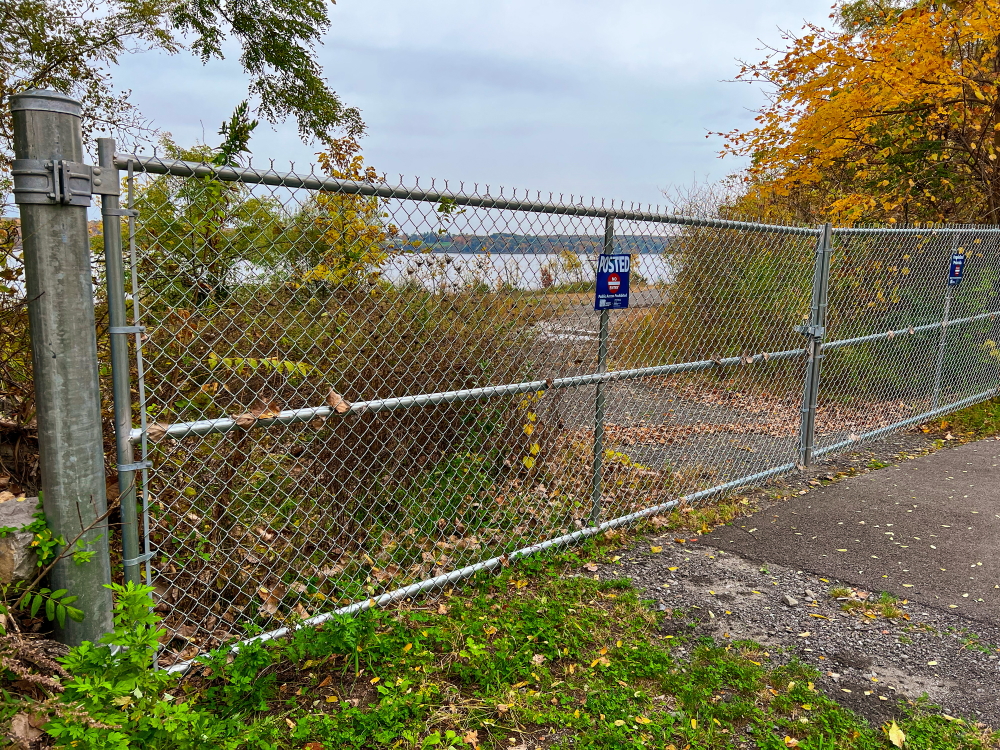 The newly designated Sojourner Truth State Park in Kingston does not have river access, but that would change if voters approve a bond act on the statewide ballot. (Photo by B. Cronin)

Eight months ago, Gov. Kathy Hochul visited Kingston to unveil the Sojourner Truth State Park. A collaboration between the state, Scenic Hudson and the Palisades Interstate Park Commission, the 500-acre park includes 17 ecosystems and a connection to the 750-mile Empire State Trail.

Most of the park has been off-limits since. There are a few portable toilets, a 1-mile trail to a scenic overlook, and ruins from the site’s industrial history.

“We just put in the bare minimum that’s needed,” explained Andy Bicking of Scenic Hudson. But that could soon change, depending on voters.

Starting with early voting on Saturday (Oct. 29), New Yorkers will be asked to vote on a proposition that would authorize the state to issue up to $4.2 billion in bonds to “fund environmental protection, natural restoration, resiliency, and clean energy projects.”

Although at least $650 million would be spent on water quality and resilient infrastructure, $1.1 billion on restoration and flood reduction, $1.5 billion on climate change mitigation and $650 million on open space conservation and recreation, Bicking said that only two specific projects have been designated so far. The first is boat launches and other access points along a stretch of the river between Kingston and Albany and the second is Sojourner Truth State Park.

Voters in New York have passed 10 environmental bond acts in the past 112 years. The first were created to preserve open spaces and add to the state park system. Starting in the 1960s, the bond acts funded pollution cleanup and wastewater infrastructure. The most recent bond, championed by then-Gov. George Pataki, who lives in Garrison, passed in 1996. Valued at $1.75 billion, it allowed the state to undertake projects such as closing landfills, cleaning up the Long Island Sound and Lake Champlain, removing coal-fired furnaces in schools and buying natural-gas-powered buses.

In January 2020, then-Gov. Andrew Cuomo announced a $3 billion environmental bond act, but it was scrapped because of the pandemic. In September 2021, after Hurricane Ida caused $7.5 billion in damages and killed 17 people in the state, Hochul resurrected the idea and asked the Legislature to add $1.2 billion. A bill to put the bond act on the ballot passed the state Legislature on April 8 as part of budget legislation.

A survey in late September by Sienna College of 655 likely voters found that 55 percent supported the measure, and 12 percent were undecided. But not everyone is a fan of the spending. The chair of the Conservative Party blasted the proposition, for example, saying that “New Yorkers do not need another $4.2 billion in public debt,” especially with rising interest rates. 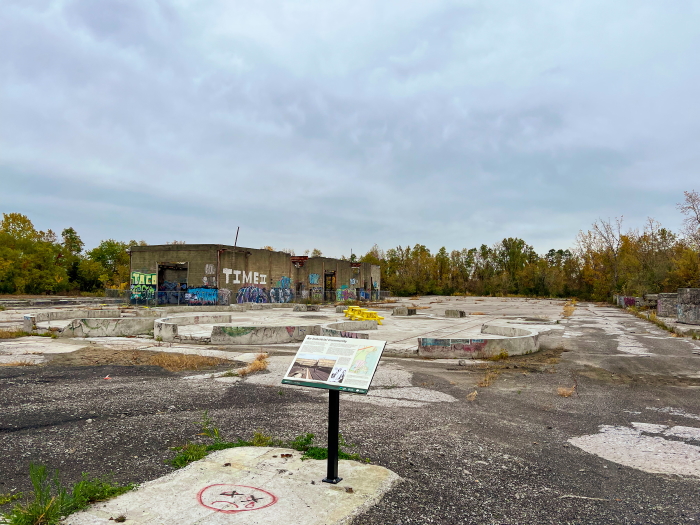 The interior of Sojourner Truth State Park is currently off limits, but the site’s industrial history is accessible. (Photo by B. Cronin)

At a news conference at Beacon’s waterfront on Wednesday (Oct. 26), Jonathan Jacobsen, whose Assembly district includes the city, argued that interest rates are still significantly lower than those in the bond acts of the 1970s. And Bicking said that the interest rates the state is paying will fall in 2023 because it has been making good on its debt obligations; he also noted out that, because the bond act has already been factored into the state budget, its passage would not raise taxes.

Advocates are less worried about support for the bond act than fears that voters will miss it because, in most places, it appears on the back of the ballot. Last year, a back-of-the-ballot proposition to authorize no-excuse absentee voting failed by 306,683 votes and 391,133 people left it blank, suggesting they might have missed the question.

Although only two specific project have been identified for funding if the bond act is approved, there are general areas where the money would be allocated.

While the bond acts of the 1970s are credited with saving the Hudson River, climate change threatens to undo all the progress. As the last few summers have shown, the Northeast has entered an era in which wet summers filled with precipitation events of increased frequency, intensity, and duration will be interspersed with brutally hot periods of drought.

For those communities that get their drinking water from the Hudson, that’s a problem. Bigger storms mean more eroded sediment and hazardous run-off being washed into the river, as well as more sewage overflow.

The increased storms are already changing the Hudson in surprising ways: Last summer the Hudson received so much rain that it actually pushed the salt front — the point in the river at which the fresh water from the Adirondacks meets the salty water from the Atlantic — further upstream. Usually, the front can be found somewhere between Bannerman’s Island and Beacon, but in this case it surged upstream toward Poughkeepsie, one of the seven communities that draws from the river for drinking water. As a result, those living in the city who were on sodium restricted diets for medical reasons had to take precautions.

Beacon Mayor Lee Kyriacou said that while money from the American Rescue Plan Act of 2021 allowed the city to upgrade its wastewater treatment plan, there’s much more work to be done for the city and others such as Newburgh and Poughkeepsie that also still have sewer pipes that are over 100 years old.

As a decade of storms that began with Sandy in 2012 have shown, sewage systems built a century ago are not built to handle today’s climate. One of every four wastewater plants are close enough to the Hudson to be affected by projected sea-level rise, and there are more than 200 pipes in the mid- and upper- Hudson that discharge sewage into the river during heavy rains.

“We know that more water is coming,” said Jessica Ottney Mahar of The Nature Conservancy. “So this funding will be used to revitalize water fronts, rehabilitate coastal areas and restore shorelines. It’ll be used to modify our transportation infrastructure, our roads, our dams, our bridges, our culverts, so that when these storms come, those roads aren’t blowing out, cutting off lifelines, cutting people off from vital areas like hospitals, or schools or other community amenities, and community, places that they rely on, especially during the emergency.” 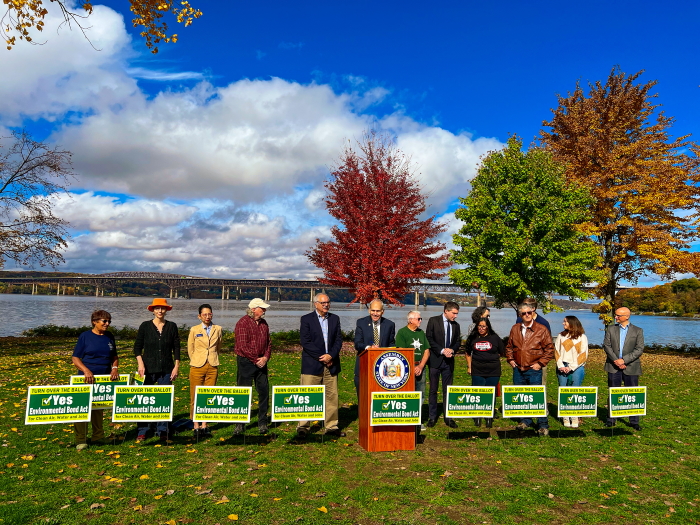 Assembly Member Jonathan Jacobson (center) and other elected officials, candidates, officials and stakeholders gathered in Beacon on Oct. 26 to voice support for Proposition 1. (Photo by B. Cronin)

The act is projected to support nearly 100,000 jobs with prevailing wage requirements and labor agreements. “That means that people working in a job in the North Country or Long Island can afford to live in these communities,” said Marina O’Donnell of the International Union of Operating Engineers. “It means contractors can’t run a race to the bottom or bring in low skilled, low paid workers and then go spend the money in Tennessee or out of state.”

Heat is already the leading cause of climate-related deaths, and that threat will only worsen. To mitigate this, funding from the bond act would create cooling centers for heat waves, as well as urban tree planting projects, community gardens and green roofs to lower ambient air temperature in cities.

A stipulation in the bill states that at least 35 percent of its funds have to be directed to “disadvantaged” communities that have borne the brunt of pollution and industrialization while being at greater risk to climate change. By the state’s definition, Beacon would qualify and, as a result, would have greater precedence when it comes to getting electric school buses or electric-vehicle charging stations, as well as increased funding for capital projects such as wastewater upgrades.

Funding from the act would go toward easements for small family farms while providing funds for infrastructure and equipment upgrades that would make it easier to farm in ways that improve soil health and decrease methane emissions.

Recreation funding from the act would go toward building more greenway, or rail, trails, with the hope that connecting them to cities like Beacon and Newburgh would add to the number of commuters who already use the trails to walk or bike to work.

Kathy Moser of the Open Space Institute said that, if passed, the bond act could leverage other sources of funding as catalysts. “If the state can say to a municipal park system ‘We’ll give you 75 percent of the funding if you find the other 25 percent,’ cities will find that money to improve their own park systems,” she said. “And that’s the first step to getting more people outdoors: Get them out into open spaces in their own cities where they feel more comfortable.”