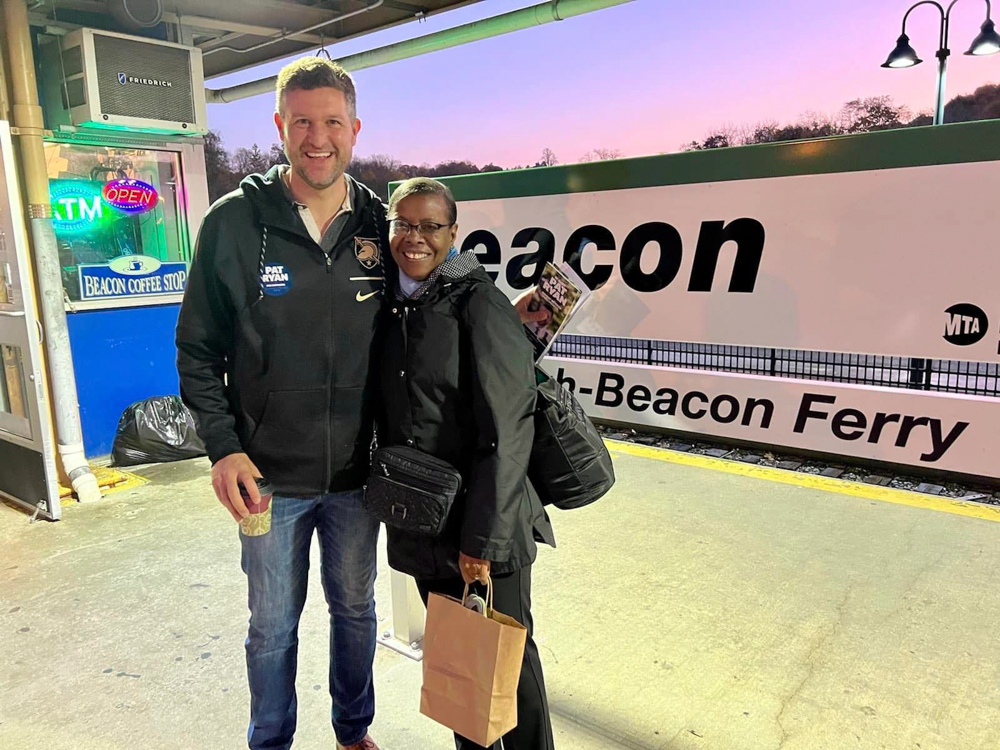 Plus other local and state results

U.S. Rep. Sean Patrick Maloney, a Democrat from Philipstown who has represented the Highlands in Congress since 2013, on Wednesday morning (Nov. 9) conceded his race to Republican challenger Mike Lawler.

An anticipated “red wave” of Republican wins in the U.S. Senate and House did not materialize nationally, but there was a ripple locally, with Republicans taking two of three Hudson Valley congressional districts that had been held by Democrats, bolstering their chances of regaining control of the House. The state Senate seat that represents the Highlands also remained Republican. 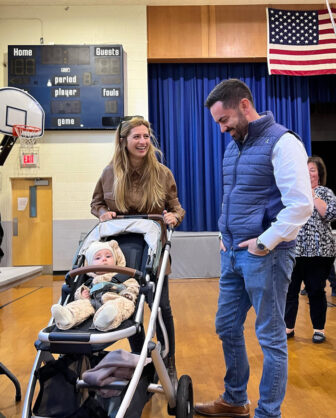 Mike Lawler and his wife, who live in Rockland County, took their daughter with them to vote on Nov. 8. (Campaign photo)

Before redistricting based on 2020 census data, District 17 was held by Mondaire Jones, District 18 (including Philipstown and Beacon) by Maloney and District 19 by Antonio Delgado, all Democrats.

On Tuesday, the new Districts 17 and 19 flipped red, with Marc Molinaro, the Dutchess County executive, winning the seat vacated by Delgado this year when he became lieutenant governor.

Molinaro’s deputy, William O’Neill, will become county executive on Jan. 1 and serve for a year; the position will be on the November 2023 ballot.

Knocking out Maloney, the chair of the Democratic Congressional Campaign Committee, was a prize for the GOP. The Congressional Leadership Fund, a political action committee devoted to electing Republicans, spent millions of dollars on video ads and flyers in District 17, attacking Maloney on crime and supporting Lawler.

Maloney countered by dubbing Lawler “MAGA Mike” and portraying him as a protégé of former President Donald Trump. As in other races, each candidate claimed he was mainstream and his opponent represented the extreme.

In the end, Lawler won, by 3,200 votes among more than 278,000 cast. Maloney was strongest in Westchester County but could not overcome deficits in Dutchess, Putnam and Rockland.

“I don’t like to lose,” Maloney said at a news conference on Wednesday. “But my opponent won this race, and he won it fair and square. … I’m deeply grateful to the people of the Hudson Valley for giving me their voice and their vote in Washington for 10 years. I’m not going to whine about it. I’m going to do this the right way. And the right thing to do is to say the other guy won, to wish him well and to pledge my support.”

On the House results in general, he said: “House Democrats stood our ground. And we believe Nov. 8, 2022, will be a signature day in American political history, and, we hope, the high watermark of some of the anger and the division that we have dealt with this entire cycle from Jan. 6 on through. And we hope for something better for our country.”

As of Thursday, Democrats were projected to maintain their 51-50 advantage in the Senate (with Vice President Kamala Harris as a tiebreaker) but cede control of the House, where Republicans needed to gain just five seats. Because of a number of close races, the Republican’s margin (if any) may not be known until next week, but the party’s quest to retake the House was aided by four seats it flipped in New York, including by Lawler and Molinaro.

In the race for District 18, the Democratic candidate, Pat Ryan, held off Colin Schmitt, the Republican candidate, winning by fewer than 2,200 of 266,000 votes cast. Although absentee ballots postmarked by Election Day can still arrive to be counted over the next week, it is unlikely they would change the result, and Schmitt conceded the race at 8 a.m. Wednesday.

“After a hard-fought campaign the people of our district made their choice and I respect their decision. I wish the best for Pat Ryan and hope he will do great things for our Hudson Valley families,” he said. “I thank my wife Nikki, my family, friends, supporters, and team for all their dedication and commitment given to this campaign. We left it all on the field and I am proud to have been in the arena fighting for my home community.”

Ryan currently represents District 19. He defeated Molinaro earlier in the year to fill the seat vacated by Antonio Delgado, who left to become lieutenant governor.

Julie Shiroishi, a Beacon resident running as a Democrat, lost her bid for the District 39 state Senate seat that will include Beacon and Philipstown. With all precincts reporting, Rob Rolison, the Republican mayor of Poughkeepsie, was victorious, 51 to 45 percent. He is a former Town of Poughkeepsie detective and Dutchess County legislator who is in his second term as mayor.

“While the outcome was not what we hoped, I am proud of all we achieved in such a short time,” Shiroishi said in a statement. “I have zero regrets and am truly humbled to have received so much love and support. This morning, I called our new senator-elect to congratulate him and wish him well. This is where I am raising my family and I want him to succeed so our communities can thrive.”

Sue Serino, a Republican from Hyde Park, had represented the Highlands since 2017 in the state Senate’s District 41, but redistricting changed its boundaries to only include northern Dutchess and she lost to Michelle Hinchey, who represents the (old) 46th District. 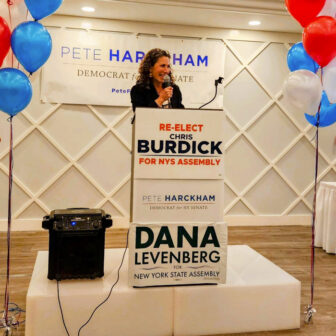 Dana Levenberg, the Ossining town supervisor, easily won the seat for District 95, which includes Philipstown. The Democrat was a former chief of staff to Sandy Galef, who held the seat for more than 30 years and offered Levenberg her endorsement.

Levenberg, who has a bachelor’s degree in international relations from Brown University, is a former advertising and TV producer. She served nine years on the Ossining school board and is in her fourth term as the Ossining town supervisor. She also worked for eight years as chief of staff for Galef, who endorsed her.

“I look forward to serving you in the state Assembly and building on the legacy of my mentor, Sandy Galef, who has exemplified good government for all of us for nearly 30 years,” Levenberg said in a statement. “She leaves large shoes to fill, but I feel well prepared to step into this office.”

Jonathan Jacobson, a Democrat whose district in the Assembly includes Beacon, ran unopposed for a third term.

Proposal No. 1: A Proposition

The proposition, which appeared on the back of the ballot, asked voters to authorize New York State to issue up to $4.2 billion in bonds to “fund environmental protection, natural restoration, resiliency, and clean energy projects.” At least $650 million will be spent on water quality and resilient infrastructure, $1.1 billion on restoration and flood reduction, $1.5 billion on climate change mitigation and $650 million on open space conservation and recreation.

The National Resources Defense Council issued this statement on Nov. 9: “Voters have made history by supporting the state’s largest environmental bond act ever. This sets the stage for $4.2 billion in investments for clean and safe water, climate mitigation, environmental justice, and land conservation. These investments will address pressing environmental challenges – including replacing dangerous lead pipes, reducing air pollution by electrifying buses and buildings, restoring coasts to protect homes from floods and much more. Now, Gov. Hochul must ensure that these funds go to the communities that need it most.”

Chuck Schumer won his fifth term, which will make him the longest service senator from New York (Daniel Patrick Moynihan served four terms). He defeated Joe Pinion, a conservative commentator who was the first Black person to receive a major party backing for the U.S. Senate in New York.

Kathy Hochul, who took over when then-Gov. Andrew Cuomo resigned in August 2021, became the first elected female governor of New York. She defeated Lee Zeldin, a four-term House member who represents the eastern two-thirds of Suffolk County on Long Island but will leave office Dec. 31.

The 9th District (of 13) covers Dutchess, Putnam, Orange, Rockland and Westchester counties. The seven candidates who received the most votes were elected to 14-year terms.

Legislative District 5 (Lake Carmel, Hamlet of Carmel, Patterson)
Greg Ellner will succeed Carl Albano (R), who could not run because of term limits.

Legislative District 9 (Town of Carmel, Mahopac)
Neal Sullivan, the incumbent, was removed from the Republican primary due to flaws in his nominating petitions but allowed to remain on the Conservative line.

Sheriff
Kirk Imperati won a full term after taking over as interim following the death last year of Adrian “Butch” Anderson, who was elected sheriff in 1999 and subsequently won five, 4-year terms without opposition.

In his 29 years with the department, Imperati has held a series of positions, including road patrol officer, detective and supervisor of crime prevention programs in local schools and organizations. Most recently, he was undersheriff, overseeing day-to-day operations at the sheriff’s office, including the corrections, civil and road patrol divisions.

He was challenged by Hanlon, who began her career as a corrections officer in 1997, became a sheriff’s deputy in 1999 and retired last year.