Wishing for a more purposeful avocation, Jen McCreery gave up a life in the theater, as a company manager, for one in a less dramatic venue: the library.

After studying playwriting and screenwriting early on, McCreery, raised in Oregon and Indiana, drifted into production work in order to “support my writing habit,” she says. This led to company managing, being that person that cast and crew turn to for help, from the personal to the fiscal — “kind of like being a camp counselor.” 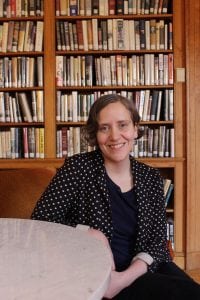 Jen McCreery, the newly-appointed director at Desmond-Fish Library.  (Photo by A. Rooney)

A long stretch, from 2003 until 2010, spending summer seasons with the Hudson Valley Shakespeare Festival, living at Graymoor, introduced her to this area. Wanting to further help people in need, she gave it up and returned to college, receiving her master’s in library science in 2011 from Queens College. Stints as a temporary librarian at the United Nations and at a library in Santa Barbara paved the way for her return to the Hudson Highlands and to the job she recently assumed, director of the Desmond-Fish Library.

This follows a stretch as interim director, after the departure of longstanding former director Carol Donick last year, and makes McCreery only the third director in the library’s 34-year history. It brings McCreery full circle to a place she enjoyed as a patron, having particularly enjoyed “spending all my money at the Annual Library Sale each August.”

Library evolution in a digital world

“As a librarian, I can help so many different aspects of people’s lives,” McCreery said. “It’s different every day — whoever walks in the door will have a different need … Plus library skills are evolving really quickly and you have to evolve with them, there’s so much technology you have to stay on top of. We offer a lot of computer help here but one charming thing about this library is that we have both worlds — there are people who love books and those who love computers. It’s a great challenge to know that your services will need to expand exponentially outwards. There are also always financial challenges to face in providing what people are demanding. The definition of libraries is evolving — they have become real community centers, but people also want to feel that they can access them from home. We have a digital library available 24/7. The main challenge is advocating for support for all the services we offer.”

All of the library’s current programs, from the many children’s play sessions to the special holiday sales, the summer reading programs and annual events like the Martin Luther King Jr. Day talks, will continue and will be augmented by new initiatives McCreery hopes to launch. These include a health literary program, with presentations by nutrition experts and other professionals, as well as a renewed emphasis on the Hudson River — from flora and fauna to art, the written word and beyond.

“We have such a wealth of expertise in this area on the Hudson and I’d like to do a series of programs relating to it,” McCreery says. She also envisions using the large expanse of outdoor greenery more, orchestrating a community potluck, getting the children’s garden going again and continuing in the vein of other outdoor programming such as rain barrel building, introduction to geocaching and last year’s visit by denizens of a llama farm.

Asked what she felt was unique about the Desmond-Fish Library, McCreery, in a tip of the hat to her predecessor, noted: “Carol Donick did a great job of establishing a tradition of a full-service library. Our staff goes above and beyond — they’re extraordinary. It’s also such a gem of a setting and the historical archives, including the Hudson River collection, are great. It’s part of the library’s mission to collect things related to the Hudson River art movement and throughout the building you can see some of this. We also have a digital Hudson River archive that people from around the world can access … We have a real opportunity to highlight items not currently on display. I’d love to do a showing of the Fish family treasures someday.”

McCreery also touched upon the library’s close relationship with the Garrison School, which she intends to keep strong. A current example of the cooperation between the institutions is the art exhibit, on display through the end of the month, of multi-media collage paintings done by the school’s third graders. Last week, in a program also coordinated by Mill Street Loft, the students and art teacher Coulter Young reviewed artworks from the library’s Hudson River art collection, then created their own. The library’s children’s librarian, Lucille Merry, often visits the school, doing a lot of outreach; she recently conducted an e-reader workshop there. “She has a good, well-established relationship with the school,” McCreery said.

The library is also continuing its extremely popular Project Code Spring workshops. Drawing more and more kids, the excitement is about to rise with the imminent donation, from Dave McCarthy at Tightrope Interactive, of a 3-D printer to be shared between the library, Garrison School and Haldane.

McCreery calls one of her goals as library director “to establish more collaboration in the community. Lucille Merry will be doing a story hour at the Farmers’ Market, we’d love to do a free library take-a-book, leave-a-book type of thing near the Garrison Metro-North platform — things like that.”

McCreery would also like to expand programs for teens, “maybe a gaming night or even a gaming room,” and seniors. “We’re looking at home delivery. There’s a long list of services we’d like to add and it’s mostly a matter of figuring out how to along with keeping up our priorities with all of our patrons.” McCreery also looks forward to working more with Butterfield Library, saying she is “just getting to know them, but already I feel like they’re a great resource for ideas and collaboration, and libraries always want to support each other — it’s part of their culture to get and give support and ideas from and to other people.”

Asked what has surprised her thus far in her first year, as interim and now permanent director, McCreery didn’t have a specific answer, saying instead that “In library school you study cataloguing, reference, help of different kinds, but nothing can prepare you for the day to day operations — things like choosing the color of the carpet onwards. Carol Donick established a tradition of making the building more energy efficient and sustainable — that’s not taught in library school, and you just take these things on as they come.”

Above all, McCreery wants to make the library “feel like a home, because it is for some people. I feel really lucky to have landed at this specific library,” she says, “protecting our collection and providing access to it. I’m really excited to start getting the lay of the land, keeping the great things going and expanding — it’s exciting.” Asked if she herself still found time to write, McCreery replied, “I think there will probably be a book about being a librarian someday.”