City discusses option and revenue it could generate

Beacon officials this year are planning to revisit Main Street parking regulations, a divisive but recurring issue as the city grows.

City leaders have discussed installing timed meters several times, including in 2014, when Dutchess County planners recommended them along Main Street, and in 2015, when the council began to set aside funding for Main Street parking and “streetscape” improvements.

Mayor Randy Casale suggested during the council’s March 11 meeting that the fund — it now has $11,000 in it — should be expanded and used to improve public transit, as well. 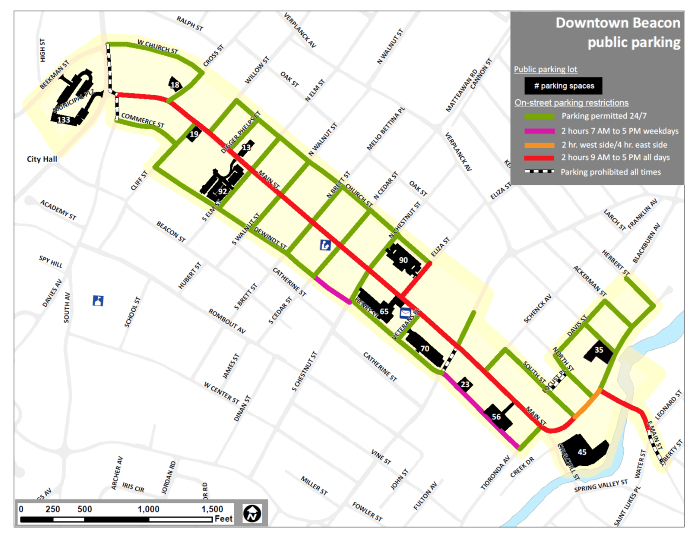 A map posted on the city’s website shows its municipal parking lots in black. (Click to enlarge.)

The idea, he said, is that parking meters on Main Street, if they’re implemented, could be used to upgrade Main Street. “If you want prime parking, you should pay for it,” Casale said. With visible improvements, the city could make the case for meters that “here’s what it costs to drive and park, and here’s what it gives you.”

A supplier estimated in 2013 that it would cost the city about $207,000 to install 24 meters — 19 would handle multiple spaces and five would cover single spaces — but that the equipment would pay for itself in about 16 months.

Meters could be a tough sell for both the council and residents. Council Members Amber Grant and Jodi McCredo said off the bat that their instinct is not to charge for parking. Meters could penalize merchants already dealing with high rents, McCredo argued, while Grant said that alternatives to driving should be a bigger part of the conversation.

“If the goal is to create a more walkable and bikeable city, what else are we doing to get to that end?” Grant asked. In addition to bike racks installed on Main Street in recent years, “there’s more that we can do,” she said.

A study conducted in 2014 by Dutchess County estimated there were nearly 1,900 spots on and near Main Street: 1,104 on Main and adjacent streets, and 794 in private and municipal lots. Between 38 percent and 59 percent of the spaces were occupied at any given time, the county found, with peak usage on weekday afternoons. 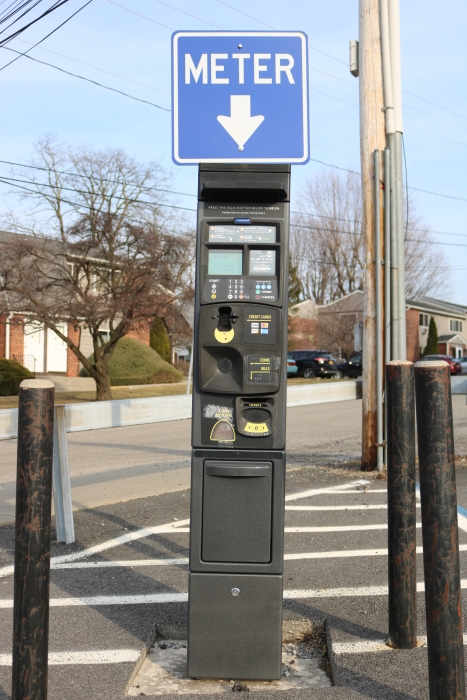 The pay station at the municipal lot in Cold Spring (Photo by M. Turton)

What About Cold Spring?

There have been discussions over the years of adding parking meters on Main Street to ease congestion and as a source of revenue.

A parking committee formed in 2008 counted 2,550 parking spots in the village, including 950 off-street (excluding driveways) and 1,600 on the street. It calculated that metering 121 spots on Main Street and at Depot Square with 12 pay-and-display stations, as well as 46 spots in the municipal lot on Fair Street with a single pay station, could bring in $180,000 annually based on a rate of 50 cents per hour on weekdays and $1 per hour on weekends and the meters operating from 11 a.m. to 8 p.m. daily.

The Village Board didn’t act on the report, and in 2014 another parking committee was formed. It recommended removing the painted lines on Main Street, which studies had shown could increase the space for parked cars by 15 percent.

In 2016 the village added the single pay station to the municipal lot that had been recommended by the 2008 committee. It grossed $15,000 in six months, exceeding expectations.

With an 85 percent capacity rate considered ideal, the data “suggests there is still ample parking capacity in the downtown area for future growth,” the Dutchess planners wrote.

Much has changed since 2014, and the city plans to take new counts, possibly using drone photography, along Main Street, Verplanck Avenue, Washington Avenue and several streets that run parallel to Main, Casale said.

At 291 Main St., the Telephone Building isn’t as affected by a parking crunch as merchants on the east and west ends of Main could be. The Telephone Building — the headquarters more than 100 years ago for the Hudson River Telephone Co. — also has its own lot. But Deborah Bigelow, the building’s owner since 1992, said she noticed a spike in pedestrian and street traffic in the summer of 2017, when it became difficult to park the equipment she uses to maintain the Main Street facade of the building.

As a shopper, she added, “I know there are days of the week and times of the day when it’s going to be hard to park on Main Street. That has, more or less, always been the case. Now, it’s more the case.

“Friday afternoon was always tough. So was Saturday,” she said, “But those windows used to be smaller. Now it’s Thursday through Sunday.”

When considering parking, the federal Department of Transportation points to Aspen, Colorado, as an example of a city that’s taken a “contemporary” approach.

Aspen implemented a “pay-and-display” parking system in 1995 (drivers place a receipt on their dashboard) while issuing residential permits for adjacent neighborhoods and doubling its bus services. Its goal, the city says, was to “decrease congestion, improve air quality and preserve our small-town character.” The revenue funds free public transportation in Aspen.

The changes were initially panned by many residents, and the city council agreed to hold a public referendum after it had been in place for three months. By the time of the vote, three-quarters of voters supported it.

In addition to meters, the Dutchess planners recommended revenue-sharing to incentivize owners of private lots to open them to the public; building a lot on the east side of the Madam Brett House; and adding clearer striping on roads adjacent to Main to encourage more parking there.

Beacon has moved forward on other recommendations in the report, such as enhanced bus service — the Beacon Free Loop bus was launched last year — and establishing the fund for parking and Main Street improvements. The report recommended improved biking and walking access in the city, as well.

During the March 11 meeting, city planning consultant John Clarke suggested gathering the parking studies that developers have done when seeking approval for their projects and using them to create a composite view. The city could then commission a new report that included a bike-plan study, he said.

“That’s how you can provide a good alternative for parking and traffic issues,” he explained. “You can accumulate all that development data instead of having to start from scratch again.”

5 thoughts on “Could Parking Meters Come to Beacon?”