Brain injury changed his perspective but not his drive

On his website, Brian Nice divides his artwork into two galleries: pre-injury and post-injury.

The injury was a brain bleed in 2009 that left him in a wheelchair. An accomplished fashion and commercial photographer, he was forced to confront what he calls a “severely contracted reality” and the fact that he might no longer be able to create art. But then a friend gave him a point-and-shoot camera.

In 2012, at the Garrison Art Center, he mounted Point of View, a solo show of his photos, which have double exposures and layering that reflect his diminished motor skills and his view of the world through damaged eyes. On Friday, April 5, from 6 to 8:30 p.m., the Buster Levi Gallery at 121 Main St. in Cold Spring will host a reception to open his latest exhibit, Another Point of View. The show, which runs through April 28, is dedicated to Brian’s father, artist Don Nice, who died earlier this month. 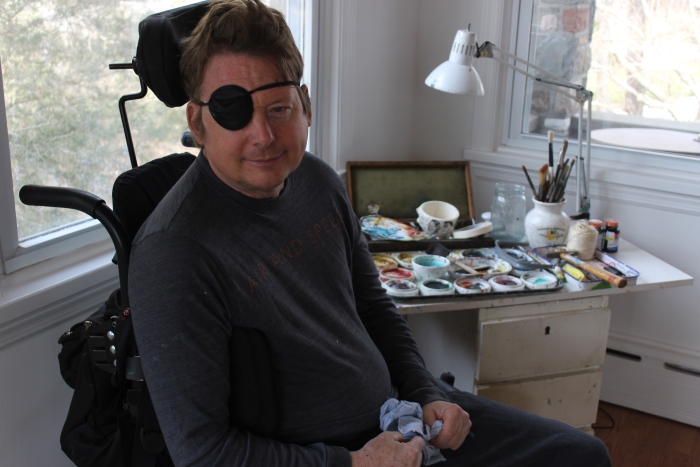 Brian Nice in his studio (Photo by A. Rooney)

“Soon there’ll be no more of them, just houses,” he explains. “When I got sick I learned you don’t have to go all over the world to make nice pictures, you just have to take the time. I’m a man in a wheelchair. I’m a captive audience. When I see something, I stare at it for a long time. It’s my personal project now.”

Nice says his love of natural beauty “came from growing up here, though when I was young all I thought was: ‘I’m outta here, there’s nothing to do.’ But I started appreciating the beauty when I was a bit older.”

Because his shaking hands make it difficult for him to hold the camera still, he engages an assistant to snap the shutter after he selects the lighting conditions. 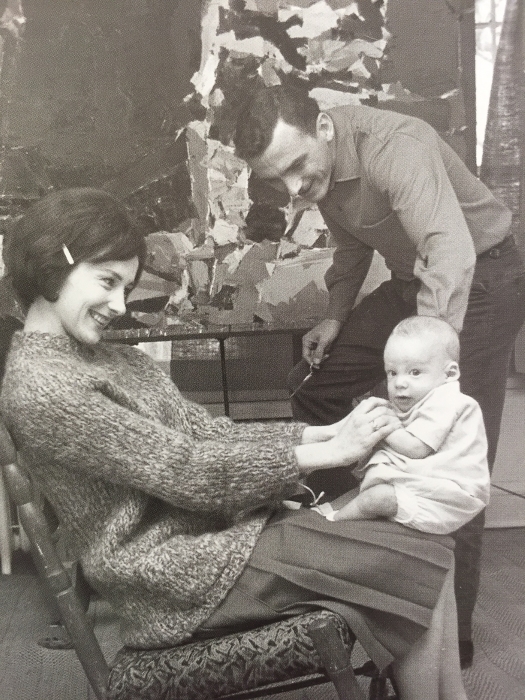 Sandra and Don Nice with Brian

“I know good light when I see it,” he says. “I choose the settings that reflect what I see and then I give directions to the person who takes it for me. Sometimes I’ll try to hold the camera. It depends on how much coffee I’ve had! Some days are good, some days not.”

Not that he’s complaining. “In the hospital, there were four people in the room, complaining,” he recalls. “Nobody wanted to be around them. If you’re nice, people pay attention. I took my disability and put it to work. Most people don’t come back from this kind of brain injury. I got lucky; I’m lucky to be alive. Physically I’m 58, mentally I’m 18.”

His life over the past 10 years has been physically challenging. “One of my eyes sees things in an up-and-down motion, and the other sees things going left and right,” he explains. “Each eye is focused that way. The brain gets tired. By the end of the day I’m exhausted. People pay a lot of money for psychedelic mushrooms just so they can feel like me, but after 24 hours, it’s enough, let me tell you.

“When this happened, I went into a coma,” he recalls. “When I woke up, I couldn’t move anything, except raising my middle finger when the doctor said I’d never walk again! The brain’s plasticity takes a long time to repair. Thanks to my photography, it’s happening. It’s pretty unique, really. I don’t think that anyone else is doing this. I have to keep moving forward.”

The injury did not affect his sense of humor. In a blog post he wrote not long before his father died, he described their life together.

“My father sold his house and he downsized to a smaller house in town,” Nice wrote. “I’m living with him. It’s a small stone house by the side of the road. Pretty cool for me because I can go into town in my power chair. It’s pretty funny living together because I can’t talk [well] and he can’t hear. You should see us trying to use the TV remote. We’re like two chimpanzee monkeys that found something shiny. Never a dull moment. And you wonder why the dog stares at us all the time. Anyway, we make it work.”

Nice’s quest to create a representation of what he is perceiving has helped others. “One guy who got in touch with me said he couldn’t explain to his doctor how he saw,” he says. “He was very thankful because with my photos he was able to show his doctor how things looked to him.”