An inarguable statement about art as a whole is that in whatever form it may be produced, it represents how its creator views what is being represented. Perhaps that view is colored by political leanings or family history or an influential trend, but whatever the coloration, the final product is a representation of the artist’s eye. 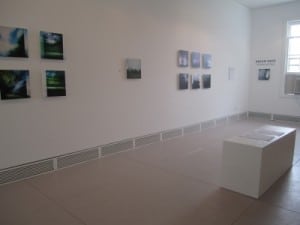 The Nice exhibit at the Garrison Art Center. Photo by A. Rooney

In Garrison Art Center’s current exhibit, A Point of View, photographer and Garrison resident Brian Nice has represented how he sees the world, quite literally. His images, some with multiple exposures and layering, most with vivid, saturated colors, some with echoing, shadowy duplications, are not some kind of statement as to what he thinks the world is coming to.  Rather, they are an accurate visual representation of how he, once a top fashion and commercial photographer, now actually physically sees the world after experiencing a traumatic brain injury out of the blue three years ago.

Nice, whose injury has affected his motor skills and has physically confined him to a wheelchair for now, has retained his creative spirit and artist’s eye, the internal one. With this new work he wanted to show others how he now sees the world.

“That was my main objective: to show people how I really see now.” After receiving a camera as a gift from a friend after his first brain surgery, Nice returned to his former vocation, but in a very different way. Program notes quote him as saying, “This camera is special, because it is honest. Everything is done in the camera: cropping, double exposure, color, etc. I come from the old school of film. I never use Photoshop.”

He expands on this in person: “There’s a lot of movement in these images — that’s from my arm, which constantly shakes. The colors are all new; I used to see the world as muted, now it’s like seeing the world for the first time. It’s hard to describe in words, it’s a ‘real’ blue — it’s like a child who can see for the first time.”

Asked if the images that he has produced are fully intentional, Nice replied, “Kind of. I have what I want to do in mind, but I don’t know if I’ve captured it until I see the results. Sometimes you get exactly what you go out to achieve.”

Interestingly, much of Nice’s recent pre-injury body of work was in black and white, including a series of photographs taken on a journey to Greenland with his father, painter Don Nice, wherein father painted the icebergs and son photographed them. Brian Nice’s path towards photography in part stemmed from his father’s work. “My dad was a realist painter, always focusing on objects, so I was intrigued as well.  In high school a guidance counselor looked at my SATs, leaned back, and said, ‘So — you’re an artist, because with these grades … it’s obvious. You could go to school for photography.’”

With that and a BFA from Rochester Institute of Technology, his career, which eventually took him all over the world, was launched. His commercial work, much of which took place outdoors and not in studios, led to worldwide travel, including stretches of time spent on the beaches of Bondi, Australia, where he “lived and surfed.” His home before the injury was in Montauk, where he again enjoyed the beach and the ocean. 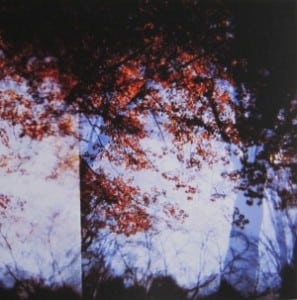 He is reflective on his new life, back in his first home, Garrison.  “When I got sick I learned you don’t have to go all over the world to make nice pictures, you just have to take the time. Now I’m forced to sit on the porch and look at the tree.” At this his mother, Sandra Nice, interjects aptly, “Some people don’t even see the tree.”

Nice’s subjects now are the elements of the world he sees, as he has the camera with him all the time: trees from his porch; whatever catches his eye on the frequent drives to and from his physical therapy at the Helen Hayes Rehabilitation Hospital Center in West Haverstraw; the Bear Mountain carousel; swimmers and kayakers in an event near the shoreline of the Hudson; even Pete’s Hometown Deli in Nelsonville. Therapy is helping him with all the things one never gives much thought to until difficulties arise: sitting up, holding the camera, trying to stand and walk, just generally working to get stronger.

For this show, Nice began with 900 images, which were first whittled down to 300 and then edited to 60 by Garrison Art Center’s director, Carinda Swann. Swann originally envisioned an exhibit contrasting Nice’s earlier, black and white work, with the current photographs.  After she saw the new work, she reconsidered the idea. “I immediately felt this work needed to have its own exhibition. The earlier Greenalnd work was beautiful in a more traditional way, but there was no point in including it.”

Continuing, Swann says: “We had a lot more freedom to make a beautiful show this way. We were toying with names and suddenly came up with Point Of View, which says a whole lot of different things.  Then we decided to hang the show with a new point of view. We built benches that seat people at Brian’s eye level, and hung the pictures at that level too. It’s really different when you’re seated.” Nice concurs, “I love it. I like the fact that I can share how I really see things.”

The exhibition, which opened on Aug. 11 and continues through Sept. 2, has been very successful, with estimates of over 300 people attending the opening reception and, at press time, 26 of 35 pieces sold already. (The negatives are scanned to make the digital, archival pigment prints, and more can be made upon demand.) 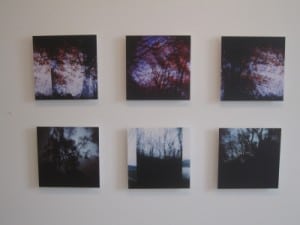 A selection of Nice’s artwork. Photo by A. Rooney

Nice has been visiting the gallery every Saturday from noon until 2 p.m. as he will do for the run of the show, and has enjoyed interacting with the attendees and fielding their questions, a frequent one being why he hasn’t framed the works. “I just wanted to show the image. Your focus goes to the frame [when there is one] and I want your eyes to go right to the image because that’s what counts.” Nice says people also often talk about dimensions of the colors.

Nice’s own written words sum things up: “My current work is very different, yet helps me express and show how I see the world now. It allows me to continue my art and gives me a real sense of myself. I still connect to the world through a camera — I just have a different perspective. This validates that there are many ways of seeing and relating to life, none being better than another, just different.”

The Riverside Galleries at the Garrison Art Center are open from Tuesday through Sunday from 10 a.m. to 5 p.m. Visit garrisonartcenter.org for more details. For more information on Brian Nice or to read his blog, visit helpbriannice.com.