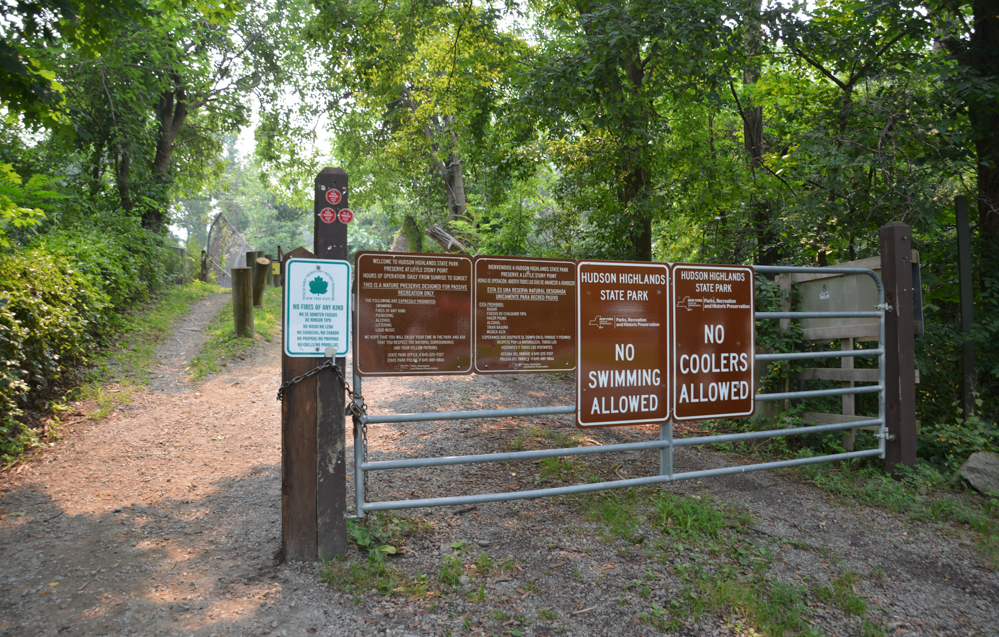 Signs at Little Stony Point, including at the entrance, warn visitors that swimming is not allowed. (Photo by L.S. Armstrong)

Putnam County’s elimination of Sheriff’s Department patrols on the Hudson River continued to make waves this month as some local officials linked it to a June 29 drowning near Cold Spring and neighboring counties were non-committal about patrolling in Putnam’s absence.

After scuttling the river patrols, Putnam County Executive MaryEllen Odell on June 17 appealed to Rockland, Orange, Westchester and Dutchess to “continue a conversation” about mutual aid on the river off Cold Spring, Garrison and Philipstown.

When contacted by The Current, Rockland, Orange and Dutchess officials said they would continue to provide emergency assistance but did not commit to regular patrols along Putnam’s shoreline.

A representative of the Dutchess County Sheriff’s Department said on Monday (July 19) that it planned to continue patrolling the river at its southern border with Putnam and that the New York State Police, state park police and U.S. Coast Guard could “provide satisfactory coverage of the Putnam County portion of the Hudson River.” Westchester County declined to comment.

Last fall, when setting the 2021 budget, Odell and the Putnam Legislature removed $45,000 in funding, effectively crippling river patrols. In June, Odell directed New York State to retrieve two patrol boats that it had provided to the county at no charge. Most of the cost of the river patrols, conducted on weekends and holidays, was overtime pay for deputies, according to Sheriff Robert Langley Jr.

Nancy Montgomery, who represents Philipstown in the county Legislature, put the annual cost at $65,000, with the state reimbursing the county for half that amount.

Montgomery said at a Philipstown Town Board meeting on July 8 that she had twice asked Odell to explain Putnam’s plans for getting other counties to help. “To my knowledge, [the four counties] were only informed on June 17 that we were without a marine unit, despite the fact that we defunded it in November and dismantled it this [past] month.”

The June 29 drowning of Yesvely Lopez, 17, of Newburgh, near Little Stony Point led to suggestions that the teenager might have been saved had the river unit not been dismantled.

During the July 6 county Legislature meeting, Montgomery observed that the Sheriff’s Department had docked a boat at the Cold Spring waterfront. Had the county not removed the patrols, “the call-time would’ve been very different,” she asserted. “We would have had a boat in the water [already]. It would’ve been within minutes of Little Stony Point. Time matters.”

In addition, she said, deputies “would have provided extra eyes on the river,” and that “extra eyes when somebody is drowning could be a matter of life or death.”

Kathleen Foley, a Cold Spring village trustee and mayoral candidate, wrote on Facebook that “playing politics with public safety is sick and dangerous” while Philipstown Supervisor Richard Shea said at a meeting on July 8 that the quick launch of a Sheriff’s Department boat could have made a crucial difference. “Instead, you have a dead 17-year-old,” he said.

Michael Bowman, the mayor of Nelsonville and a longtime volunteer firefighter, noted on Facebook that on Sunday (July 18) he counted 25 people in the water near Little Stony Point, where swimming is banned, and noted the strong current. “With the lack of a police boat on the river, the state needs to either provide a lifeguard or start enforcing the law,” he wrote. 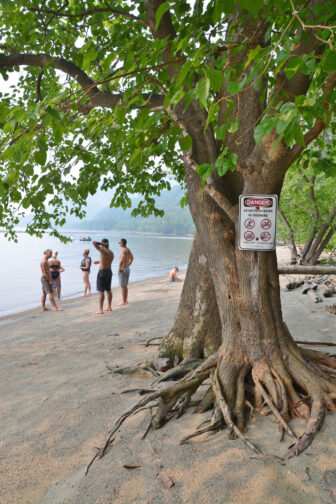 A sign at the Little Stony Point riverfront, known locally as Sandy Beach, warns of the dangers of swimming there. (Photo by L.S. Armstrong)

Others, including Chris Tobin, who heads the Philipstown Volunteer Ambulance Corps, who commented on Facebook, and Putnam Legislator Carl Albano of Carmel, said that the boat likely would not have made a difference on June 29. “Accidents happen,” Albano said on July 6.

In addition, the county Bureau of Emergency Services noted in a June 30 statement, a sheriff’s boat would not have been on the river at the time of the drowning, a Tuesday evening, because the Marine Unit only patrolled on weekends and holidays.

However, Capt. Lisa Ortolano, a representative of the Sheriff’s Department, said the patrol could have responded at any time if called upon.

“We have deputies to patrol the west side of the county who are assigned to the Marine Patrol Unit and who are able to quickly respond to emergencies on the river and other bodies of water,” she said. Three of the deputies live in Philipstown, she pointed out.

On July 6, Montgomery also questioned “who will conduct day-to-day marine patrols” and investigations, deal with speeding or intoxicated boaters, or perform boat safety checks now that the river patrol has been disbanded.

Montgomery, an emergency medical technician, reiterated her concerns during her monthly report to the Philipstown Town Board two days later. River-based forensic investigations, keeping the peace on the waters and routine patrols “are not the jobs of fire companies, despite the fact they do a tremendous job,” she said. “These are law enforcement responsibilities, and Putnam County has just walked away from its responsibility on the Hudson River.”

Town Board Member John Van Tassel, who volunteers with the North Highlands Fire Co., said he was at Little Stony Point during the search for Lopez. He said having a Sheriff’s Department boat responding likely would not have prevented her death. “But it may have prevented it,” he said. “There are a million scenarios on how it could have helped. There’s not one where it would’ve been a harm.”

The night of the drowning, although there were multiple rescue boats and a state police helicopter overhead, “there was not one police department boat,” he said. “I am disgusted with the fact the Putnam County sheriff’s [deputies] do not have a boat on the Hudson. You would think that with the amount of tourism and use the Hudson River brings to Putnam County, that this is the least we could do. If we were in a dire financial situation, I’d still think there would be another place they could cut that would be more appropriate.”

Shea juxtaposed Putnam County’s recent report on its sales tax revenue in 2020 — $66 million, an increase over 2019, even with the pandemic shutdown — with its professed lack of funds for river patrols. “The county is flush with money,” he said. And “the western side of the county, Philipstown, is always shortchanged, taking our sales tax money and not giving it back.”

In its June 30 statement, the county Bureau of Emergency Services indicated that Putnam intends for voluntary civilian organizations, such as local fire departments, to handle water emergencies. “The volunteers of Putnam County have [been] and will continue to be the primary responders for all incidents on the Hudson River, supported by their colleagues from throughout the region,” it announced.

But Montgomery countered on July 6 that “our sheriff’s deputies have a lot more training in marine patrol and safety than our very dedicated volunteers in the fire departments.”

The Cold Spring Fire Co. owns a boat equipped to extinguish fires on vessels or along the shore and to do basic rescues, said Chief Tom Merrigan. “We have responded to five marine incidents on the Hudson River this calendar year already with adequate manpower and an exceptionally fast response time,” he said. He declined to compare CSFC and Sheriff Department response times.

The Garrison Volunteer Fire Co., which also owns a boat, did not reply to requests for comment.

One thought on “Could River Patrol Have Saved Swimmer?”