Off and on for over five years, plans for an upscale, recreation-oriented hamlet on 210 acres in northern Philipstown generated intense public debate, reams of material, and dogged scrutiny by the town Planning Board and other land-use review panels.

Labeled a “conservation subdivision,” the Hudson Highlands Reserve was to include 25 homes, each about 2,500 square feet and priced at $1 million to $3 million, with several arranged around a large pond or small lake; an equestrian center with room for 40 horses; and open space beneath mountainous slopes, all bounded by Route 9 on the west, East Mountain Road North on the north and Horton Road on the south.

But after a public hearing in June 2019, Hudson Highlands Reserve faded from attention while its sponsors prepared responses to detailed feedback from the Planning Board and others and began drafting a final Environmental Impact Statement.

Now, two years later, the Hudson Highlands Reserve is back, minus the horses and equestrian center, and with other design changes.

In a presentation in July, representatives for the developer, the New York City-based Horton Road LLC, re-introduced the project to the Planning Board, whose composition has changed since the last go-round.

“I love the movie Blast from the Past. We’re going to have our own Philipstown version of that,” said Neal Zuckerman, who chairs the board. 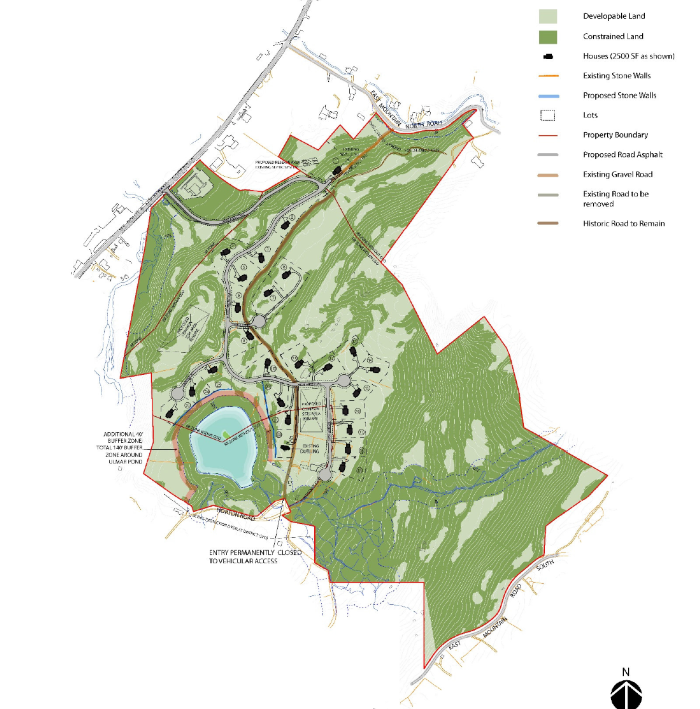 As proposed, the development would include 25 homes and an existing pond.

Listing what he called the most significant revisions, Glennon Watson, of the Philipstown-based Badey & Watson Surveying and Engineering firm, cited the removal of the equestrian center and a large parking lot, actions that would open more land as wildlife passageways; move residences farther from the pond; and relocate a few homes to the area once intended for the horse center.

He acknowledged that “at first glance, this [plan] looks very similar. But you have to look a little more closely.”

Stephen Gross, of Hudson Highlands Environmental Consulting, based in Warwick, added that a circa-1920 house will now be one of the complex’s 25 homes, which means one fewer to construct; the houses will be situated on a smaller share of the parcel; plans for the entrance road on Route 9 have been redrawn; and the entrance could be moved to East Mountain Road North.

Gross said the plans also preserve a lane, bordered by stone walls, as a walking path, and a barn built in the early 19th century.

According to a Final Environmental Impact Statement submitted in April to the Planning Board, the elimination of the equestrian center and parking and cutting street lengths by 575 feet will ensure a significant reduction in the amount of impervious surfaces.

However, the complex is still being presented as a “conservation subdivision,” a description that previously raised questions because conservation subdivisions typically place houses and other buildings close together, as in a traditional village, to protect the landscape around them. In the plans, the 25 homes appear to again be spaced well apart from each other, each on its own large lot.