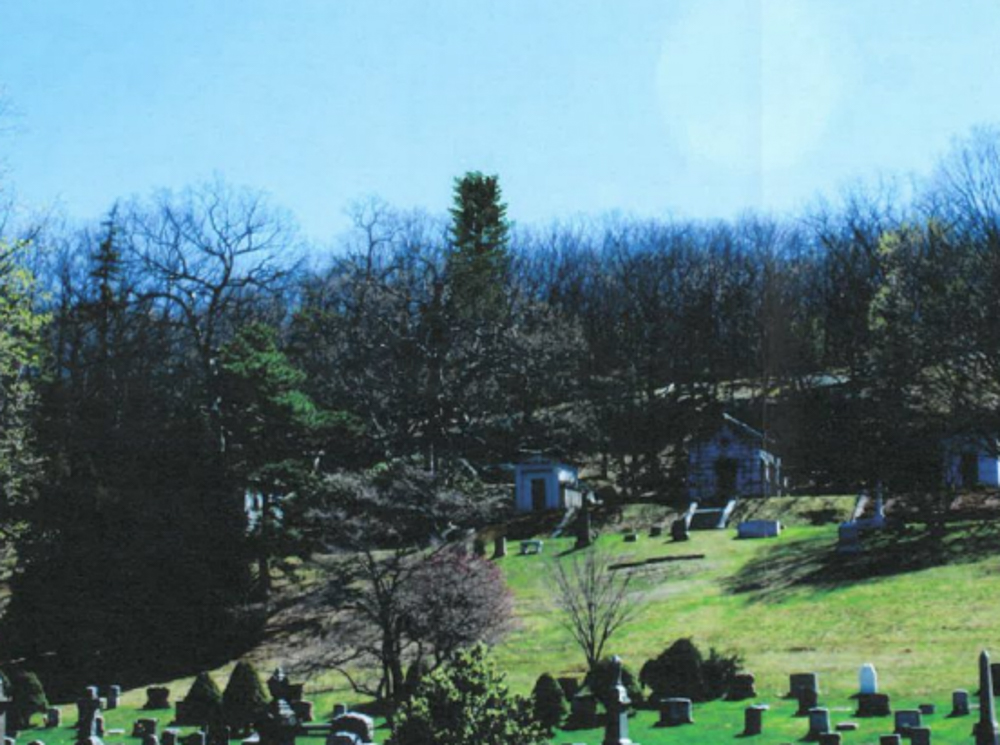 A 2020 report included a rendering of how the proposed 95-foot Nelsonville cell tower, disguised as a tree, would look from the Cold Spring Cemetery.

A New York state court judge on Wednesday (Feb. 23) stopped Homeland Towers from transforming a right of way it needs to reach a Nelsonville cell tower site and predicted opponents of the company’s access plans would prevail.

The action by Putnam County Supreme Court Judge Thomas Davis, who issued a preliminary injunction against Homeland, came less than 24 hours after Mayor Mike Bowman told the Village Board that the cell tower firm expected in June to start construction of a 95-foot tower disguised as a fir tree. Located off Rockledge Road, a private, dead-end lane intersecting Moffatt Road, the 9.6-acre site overlooks the Cold Spring Cemetery.

Homeland’s parcel can be accessed through a right of way that runs through the property of neighbors. Homeland wants to remove trees and widen and resurface the pathway and dig trenches for hundreds of feet long for cables and conduits.

Homeland contends that it can proceed because its deed to the parcel, which it purchased two years ago, does not limit it to using the right-of-way path merely for entry and exit, or “ingress and egress,” in legal parlance.

Richard Villella and Courtney Tarpley and their neighbors, Jeff Rossi and Melissa Gillmer and Michael and Rosemarie Olshakoski, sued in 2020, seeking a permanent injunction against Homeland’s intended alterations to the right of way.

The deed for the parcel refers to “a right of way in common with others over lands,” wording that “bolsters the position of the plaintiffs [the neighbors] that the right of way is only for ingress and egress over the land,” Davis emphasized in his ruling.

The judge cited decisions from the New York Court of Appeals, the state’s highest judicial panel. In 1959, he noted, the court declared that “the reservation of a mere ‘right of way’ ” in existing jurisprudence “included only the right of passage over the surface of the land.”

Seven years later, in a case involving a property owner who sued after a utility company laid gas lines under a right of way, it found that if the utility continued its activity, the landowner’s right “to the fruit of the soil … would be taken away, diverted and appropriated for the purposes of a corporation.” 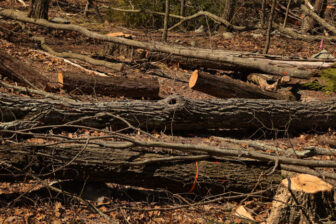 On March 28, 2021, Homeland Towers and Verizon began cutting down trees on a parcel off Rockledge Road in Nelsonville to make room for a cell tower. “The devastation is pretty significant,” Courtney Tarpley, who with her husband filed a lawsuit, said at the time. “They don’t even have the go-ahead to build the tower.” (File photo by Ross Corsair)

Based on such precedents, Davis declared that the Rockledge homeowners “are likely to succeed on the merits of the main legal issue” they raise, “that the right of way benefiting the Homeland parcel is for ingress and egress only, to pass over the land,” and “that the trench-digging and installation of these materials is not permitted.”

Davis acknowledged that an unsettled question remains: Whether Homeland might avoid the more disruptive elements of its plan and widen the right of way.

He noted that the neighbors likewise “assert they will suffer irreparable injury” if Homeland proceeds, “creating substantial, additional surface disturbance” and otherwise “irreparably changing the right- of-way and the bucolic nature of the area.”

Homeland asserts “the alleged harm can be compensated with money damages,” the judge observed, but “Homeland’s arguments are unavailing.” He explained that the company’s proposed changes to the landscape, and their effect on homeowners’ ability to control what happens to their properties, “in which they have vested rights, and over which Homeland has a limited right to pass for ingress and egress, cannot be compensated with money damages.”

Davis also discounted the tower builder’s claim that gaps in cellphone connectivity threaten to harm the public, including emergency first-responders.

“This court is not persuaded that the public’s general desire for better cellphone coverage outweighs the real property rights of individuals,” he wrote. Moreover, he suggested that any hardship to Homeland from delays to its project “is self-created. It forged ahead” with its plans, assuming it would succeed, “rather than proceeding cautiously and, perhaps, seeking court intervention on the issue of the right of way before spending hundreds of thousands of dollars.”

Davis ordered attorneys for both sides to appear in court in May to discuss the status of the case, after submitting any comments regarding his ruling.

A federal judge in November dismissed a separate suit, involving U.S. environmental law, that other residents had filed. An earlier federal case that Homeland Towers brought against Nelsonville, after the village refused to grant a permit for the proposed cell tower, resulted in a 2020 settlement allowing the tower to be built.

Villella said on Thursday (Feb. 24) that the legal battle with Homeland has cost at least $60,000 — so much that he and his wife launched a fundraiser at gofundme.com.

One thought on “No Way to Right of Way Changes, Says Judge”