For the first time since ending the fishing of American shad in the Hudson River in 2009, the state Department of Environmental Conservation has put forth benchmarks for its return.

A newly released report establishes targets that, when reached for several years in a row, would trigger the return of catch-and-release shad fishing in the river.

The agency hopes that the return of shad fishing would spur public enthusiasm and support for continued habitat restoration, invasive species management and other actions that would eventually allow anglers to keep their catches. The long-term goal would be commercial fishing, although that could be decades away.

Few Hudson River fish are as iconic as the shad, whose annual spring migration from the Atlantic Ocean to the upper reaches of the river to spawn was celebrated with riverside festivals for thousands of years; the serviceberry tree is more commonly known as “shadbush” because of its white flowers that bloom when the shad have returned to the Hudson River.

However, catastrophic declines in the Hudson shad population put an end to the festivals, and shad fishing, years ago. The last major festival was held at Boscobel in 2011.

Shad populations have been in decline on the East and West coasts in part because of the fish getting swept up as bycatch by commercial fishing vessels at sea. But the Hudson’s steep decline — and extraordinarily slow rate of recovery — remains an outlier. The shad of the Pacific Northwest’s Columbia River recovered after its population collapsed, although it took 20 years, and shad populations remain viable enough in the Delaware River to allow recreational and commercial fishing.

An ongoing study being undertaken by the DEC and researchers at Stony Brook University could shed light on why the mid-2000s collapse of the Hudson shad population was so swift, and why the recovery — although the DEC has noted an uptick since 2014 — has been so slow.

The Hudson has been stocked with shad in the past (the last time was in 1944) but the population recovered in smaller numbers each time. The DEC believes that stocking would not be beneficial because a process used by hatcheries to produce the fish destroys the female shad’s ability to repeatedly spawn. Since shad, unlike salmon, do not die after spawning, the report notes that a healthy female shad that returns to the Hudson for up to eight years will lay significantly more eggs than would be harvested in a hatchery.

Looking Back in Philipstown: Shad Edition

Fishermen on the Hudson River had their nets, poles, boats and tackle ready following reports of shad in the waters around Staten Island. On April 10, the first river shad was caught at New Hamburg; on April 22, four were reeled in from Newburgh Bay and on April 24, Hiram Van Tassel had a large haul at Garrison’s.

The first river shad of the season was caught at Fort Montgomery. Soon after, the fishing firm Hallenback and Hart arrived in Garrison from Catskill for the harvest. During one net drift near the end of the month, they caught 100.

The state conservation committee announced it would have a boat ply the Hudson to pay anglers for shad roe that would be sent each day to a hatchery in Columbia County. “Owing to the demand for fish because of the high price of meat during the World War, there was a great drive upon shad, with the result that the supply was greatly reduced and very small catches have been made until last year,” reported a Rochester newspaper.

The New York Sun noted that 4 million to 5 million pounds of shad were pulled from the Hudson annually during the 1890s; there were so many fish that farmers used them as fertilizer. By the 1920s, it had fallen to 75,000 pounds. The Sun blamed overfishing and “factory contamination.”

There was a report on April 6 that five shad had been caught at Dobbs Ferry but a Poughkeepsie firm said it had made two long drifts and caught only a sturgeon and a herring. To allow the fish to reach their spawning grounds, shad anglers were not allowed to fish on weekends. 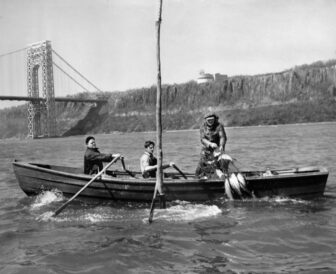 Harry Lyons fishes for shad on the Hudson River on April 18, 1947. “In my 45 years of shad fishing, this was the slowest season to get under way I’ve ever seen,” he told The New York Times. (Viewing.NYC)

There was hope that the removal of dams on Hudson tributaries would help shad recover, but at this point only 9 percent of their historical habitat is still blocked. Likewise, while the installation of fish passages on dams has been beneficial for other species, shad need to be able to pass back through the passages after heading upstream. The DEC has suggested that the focus be less on restoring upstream spawning habitat and more on restoring downstream nursery habitat so that juvenile shad, and shad returning from spawning, will survive their time in the Hudson before they head back out to sea.

The mitigation of invasive species that find their way into the Hudson via the Champlain and Erie canals remains a priority, the DEC said. Zebra mussels, which arrived in 1991, suck up the plankton that shad, and particularly young shad, rely on for food. Shad are also eaten by invasives such as silver carp, bighead carp and the round goby, the latter of which was discovered in the Hudson for the first time last summer.

Thick aquatic groves of water chestnuts, whose dried, spiky seed pods are the scourge of Hudson Valley beachcombers, also block off and diminish areas of the river that act as nurseries for shad. The DEC urged that near-shore nursery habitats be restored; one project was completed in 2018 at Gay’s Point near Coxsackie, where an artificially created tidal embayment was restored to its natural flow, improving the water quality and nursery habitat.

Recent improvements made to water intake systems utilized by power plants on the river, which are required by the Clean Water Act to minimize fish mortality, are also expected to have a positive effect, although the DEC warns that it will take time. The Indian Point nuclear plant, which closed last year, had been permitted to intake more than 2 billion gallons of river water per day.

The overarching threat to shad restoration efforts is climate change, the DEC said, because it strengthens invasive species and destroys habitat and water quality. “As conditions change, current conservation goals and management objectives may no longer be feasible,” the agency noted last fall.

The DEC is accepting public comment on the draft plan, which is online at dec.ny.gov. Comments can be submitted by May 2 by emailing [email protected] with the subject line “Shad Recovery Plan.”