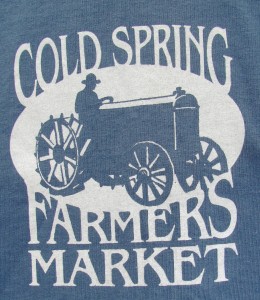 Eternal optimists believe that good things often come about as the result of bad events. Such perpetually positive people might be justified in pointing to the Cold Spring Farmers’ Market (CSFM) as a shining example of misfortune producing unexpected bounty. CSFM reopened outdoors on Saturday, May 21 after its winter run inside the Philipstown Recreation Center in Garrison.  The market was established at least in part in response to the fire that destroyed the Grand Union supermarket in February, 2002.  While the market couldn’t replace Grand Union it did provide residents with hope – not to mention fresh, local foods through the spring, summer and fall seasons.  It also quickly became an important community gathering place. Some market goers seem as happy with the chance to catch up with friends and neighbors as much as they enjoy the fresh asparagus. 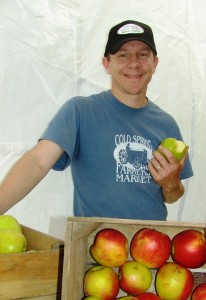 CSFM Manager Steve Bates is glad to be back at Butterfield

Saturday’s opening day at the old Butterfield Hospital site was close to perfect. A mix of sun and clouds and moderate temperatures greeted vendors and customers. This is the second year in a row that the market has made Butterfield its home after several seasons at The Nest day care center across from Drug World. “We’re really glad to be back here at Butterfield again. It’s a site that is so well suited for a market – for parking, for vendors, for customers, for children – even for the dogs!” said long time CSFM manager Steve Bates. Bates said that Marlboro’s Liberty Orchards will be joining this year’s market as a new vendor. “They are an ideal fit along with Breezy Hill Orchards because they don’t do baked goods like Breezy Hill does but they do sell preserves. They also have their own hybrid apple — Tomann Gold” Bates said. Breezy Hill Orchards has been a vendor at CSFM since its inception. Farmers’ markets generally try to offer as wide a variety as possible while limiting the number of vendors in any particular product area. Other new vendors in 2011 include honey producer Hudson River Apiary from Verplanck and Shawangunk Growers which will offer a variety of native and exotic plants. “These are not the plants you find at Home Depot”  Bates said. 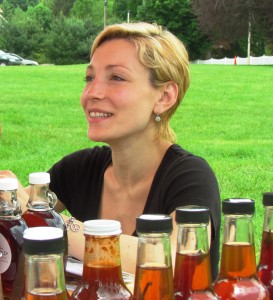 Next week veteran Cold Spring vendor Four Winds Farm will make its 2011 debut. Last week owner Jay Armour and family were busy holding their renowned annual plant sale. The sale includes several varieties of heirloom tomatoes and numerous vegetable plants which will also be available in Cold Spring next Saturday. Even though it’s early in the growing season opening day featured a surprising variety of produce. “We sold out of arugula and we also had winter scallions, spinach, dill, mescaline lettuce and radishes” said Michele Morgiewicz of Pine Island’s Morgiewicz Farms.
Vivian Graziano of Madura Farms in Goshen agreed it was an excellent opening day. We sold out of asparagus, wild mushrooms, cherry and black crim tomatoes, strawberries, leeks and sprouts.” (Tomato lovers should note that the tomatoes are greenhouse raised this time of year.) The market is a place where consumers sometimes need to take a second look at the variety of products available at each booth. There is often more than first meets the eye. Lanza Farms is a good example. The Garrison operation is well known for its traditional maple syrup, but it also offers maple syrup with a difference. On Saturday Joni Lanza was busy giving out samples of her aged-in-Kentucky-bourbon-barrels maple syrup. And they also offer chai tea maple syrup – along with maple sugar, maple candy and barbecue sauce.
It’s no secret that famers’ markets support local growers, but some of the products sold don’t immediately spring to mind as being of benefit to agriculture. Beyond the Picket Fence is a CSFM vendor that sells aromatic soaps made of all natural ingredients. “Our soaps use things from other vendors here at the market”¦carrots, strawberries, coffee and other products” said owner Gwen Newcall. 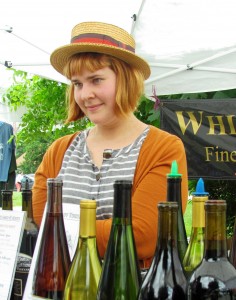 Charlotte Roncone worked the Whitecliff Vineyard booth. She not only said it was a good opening day, but she had a very good review of Philipstown consumers. “Today was good – better than other markets I’ve done, but not the best I’ve done here. This is a good market for dry wine drinkers – which is rare. At other smaller markets people seem to like sweeter wines. This market has the friendliest people – and people who really support local foods.” CSFM board member Carol Newman can likely claim some of credit for Saturday’s great weather. Newman said that last year after a rainy spell, the board decided to sell umbrellas at the market. After umbrellas were offered the market saw only one rainy Saturday. “It’s the way it always goes” Newman said. Newman was thrilled with the attendance at this year’s first outdoor market. “It’s amazing how many people we get outdoors – five times as many people – and more vendors.
This is CSFM’s tenth season.  When it began in 2002, it was one of 300 farmers’ markets across New York State. According to the U.S. Department of Agriculture that number had increased to 461 by 2010. New York is second only to California which boasts 580 outdoor markets. CSFM is open Saturdays from 8:30 a.m. to 1:30 p.m. through the end of November.
Photos by M. Turton

Other stories about the Farmers Market vendors may be found below.
Maple Syrup

One thought on “Farmers' Market is Back Outdoors”