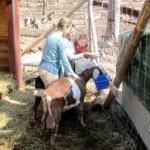 After a big city-to-country move made during a pregnancy, with a toddler in tow, one might expect an easing-in period, a stretch of time spent slowly getting to know the new environs.  Then again, Joni Lanza is used to a whirlwind of activity, as that’s what comes with living with a “restauranteur/entrepreneur” — Joni’s husband Louie Lanza, owner of multiple Manhattan dining spots.  The Lanzas moved to Garrison three years ago, seeking an outdoorsy place to raise their children, never entertaining the notion that soon thereafter they would turn a great swath of their property into a thousand-tap “maple run,” creating syrup and home-made products from the syrup, and supplying both their restaurants and their new community with the bounty from their trees.
Philipstown.info visited the farm on the first sunny and warm day in months (followed shortly thereafter by snow “¦ of course) last week.  Just a short distance from Route 9D, the welcoming setting was picture-postcard bucolic, with guinea hens taking a constitutional throughout the grounds, and Nubian goats in the distance.  As Joni Lanza related the story of the farm’s past three years, she paused for a moment, surprising herself by taking stock of all that had been accomplished.
The Lanzas found their property through a friend, and moved up here “to homestead, but not to this extent — we caught the farming bug.” Though a New York City resident in recent years, Joni Lanza has farming in her blood, having grown up on a seventh-generation cattle farm near Lexington, Ky., “with a huge garden.”  Lanza’s mother ran a dance studio in Kentucky, and it was dance which brought Lanza north, to perform professionally in Broadway shows for over a decade.  When it came to raising children, though, the Lanzas “wanted them to grow up like our grandparents did, working hard outdoors and excited about sharing with the community.” 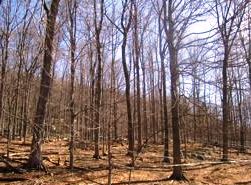 Grove of sugar maples, home to a thousand taps

Soon after their move, a friend pointed out that the vast majority of the many trees on their property were sap-producing Sugar Maples.  The grounds had not previously been used for that purpose. That same friend knew Patrick and Jackie Cronin, of Cronin’s Maple Farm in Hopewell Junction, and introduced them.  Under the guidance of the Cronins, whom Lanza calls “friends, mentors, hand-holders,” the Lanzas decided to try their hand at extracting the tap from their trees. It has been a learn-as-you-go endeavor, with unforeseen challenges each year. For instance, with the season’s early start this year their pump froze and had to be replaced right away, and they lost a day, a lost day being a big deal in the brief tapping season, which begins with above-freezing temperatures (Feb. 18th, this year) and ends as spring makes an appearance.  The trees need to be re-tapped each season, with mallet taps drilled into what is now nearly 1,000 trees. (It has been increasing each season.)  The property is divided into seven quadrants, with tubing running throughout, all connected to one pump, which disperses the sap into two 500-gallon tanks.  If the pressure gets low all the taps have to be shut off and then turned on quadrant by quadrant to find the leak. (The squirrels are attracted to the sweetness passing through and are chief chewing culprits.) 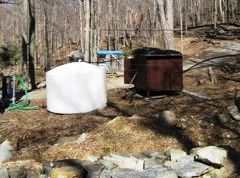 The tanks which receive the sap through tubing

Once the sap fills the tanks, the tanks are removed and brought to Cronin’s Maple Farm for boiling down in their evaporator.  It takes 45 to 50 gallons of sap to make one gallon of syrup. An on-site evaporator is part of the 5-year plan for Lanza Farm’s future.
Joni Lanza remains amazed by the short duration of time “from tree to table” and of the syrup itself. “It’s one of the world’s most natural sweeteners — no chemicals, all organically produced.”  Although it is not certified organic, Lanza says everything on the farm is handled organically, from the feed for their chickens and goats to the other ingredients included in the variety of home-made products made from and with the syrup.  This, for Lanza, is “the artistic part of all of this — the honey in my tea is making all the goodies.” These products run the gamut from ginger-infused maple syrup to maple cream, red wine maple vinegar and a dual-Lanza collaboration on maple chipotle barbeque sauce.  The signature item, reflecting Joni Lanza’s heritage, is their Bourbon Barrel Matured Maple Syrup.  Many of the products are also supplied to restaurants in the city, including Louis Lanza’s own establishments (Josie’s, and Citrus, on Amsterdam, Josephina’s, across from Lincoln Center and in Murray Hill, and Better Burger, in Chelsea, and more). Not to forget the prized maple cupcakes, made with granulated maple sugar, grabbed by as many adult hands as children’s.
The syrup itself conforms to the standard variety of grades, which include Grade A light, medium and dark ambers, and Grade B, the darkest, which, according to Lanza is “more robust, sometimes the rarest.”  The grades are determined by color, which in turn depends on the time within the season that the sap is collected. The volume produced of each grade varies year to year.  The syrup is very popular, and the Lanzas sell every bottle they make. 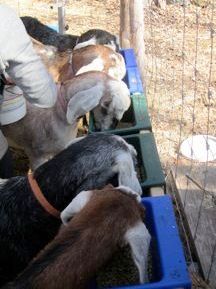 Five moms-to-be, each eating for three or four

Selling the 3 Chicks Sugar Shack (the name for the product line of Lanza Farm) products at the Cold Spring Farmers’ Market, which Lanza does monthly in winter and bi-monthly in spring, has been a great way for her to meet members of the community.  She has also become involved with the Holistic Moms network, and has outreached to other local farms, including Glynwood.  Lanza Farm has just hosted its first of what they hope will be many school groups, educating kids from Garrison School about the sap-to-syrup process.  Of “huge importance” to Lanza is her involvement with the Putnam County Agriculture and Farmland Protection Board, on which she serves.
And then there are the goats. Their five Nubian goats, which provide the milk for the cheeses also sold, are all pregnant, and should deliver in April, after a five-month gestation period. The Lanzas learned about the goats from Joyce of Acorn Hill Farmstead, another Farmers’ Market vendor.  Lanza says that the Nubian goats are prized for the fat content of their milk.  They don’t produce a high yield of milk in terms of overall volume, but instead produce a better yield for cheese-making.
All this while more and more goes on at the farm.  They are building a barn where the original house on the property was located. (Their own home was formerly the gatehouse and has been expanded and renovated.)  A new chicken coop is also being constructed.  Selective forestry and harvesting was done in the off-season last year.  By taking out a few non-native species, once brought in as shade trees, they are improving the conditions in which the Sugar Maples flourish. 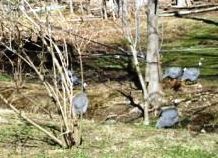 Guinea hens stroll through the property

Amidst all of this activity, the Lanza’s two young sons run around happily outdoors, soon to be joined by another sibling. Yes, on top of all this Joni Lanza is pregnant, and, she throws in almost as an aside, — she has just returned to her dancing roots, teaching tap at Cold Spring’s Hudson Valley Dance Studio.  Yes, a tap-dancing, tree-tapping entrepreneurial holistic mom.  Only in Philipstown, folks!

3 Chicks Sugar Shack will be at the Cold Spring Farmers’ Market on Saturday, March 26, and again in April.  To learn more about the operation and their product line, visit www.3chickssugarshack.com/. The products are also sold at Cronin’s Maple Farm, located at 2109 Route 52, in Hopewell Junction, which is hosting a Maple Weekend on March 26th and 27th, from 10 a.m. to 4 p.m.  A pancake breakfast with bacon will be served, and there will be demonstrations and lots of samples.  Visit http://www.croninsmaplefarm.com/ for more details and directions.
Photos by A. Rooney