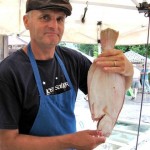 Wish granted: Fresh fish is now being sold at the Farmers’ Market

He may have been wearing a tee shirt saying “Been Too Long At Sea,” but Rick Lofstad, the seafarer at the helm of Pura Vida Fisheries, has alighted on land at the Cold Spring Farmers’ Market just in time to enhance our dinners. Since setting up shop a few weeks ago, Pura Vida has seen their fish flying out of the iced display trays into the shopping bags of happy fish lovers, who were unable to find fresh fish anywhere nearby.
Rick has been selling his fish at farmers’ markets, including the Union Square Market in NYC, for the past 5 years. He says it’s pretty much the only way to stay in business these days: “If it wasn’t for farmers’ markets I couldn’t stay a fisherman, because with limited resources and the high cost of fuel, the only way to maximize what we get is by selling retail.” His initial venture out of the city was to a market at Pleasantville, and he has since expanded all over Westchester. The Cold Spring market was recommended to him by fellow seller Vivian, of Madura Farm (the mushroom folks). Rick’s timing was perfect. The Big City empties out for the summer, and in order for him to be successful, there has to be a population with the means to purchase fish — and with no one else selling nearby.  He has learned that Philipstown is full of foodies, with a lot of the entertaining here centered on dinner parties. 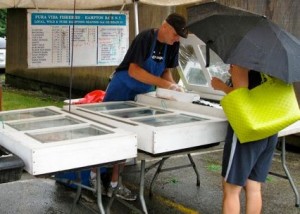 Rick attends to a customer.

As if on cue, or reading this writer’s mind, a customer stopped to buy provisions for a dinner party for 7.  Rick recognized him as a fellow Union Square Market seller, from Flying Pigs Farm (pork and eggs). But here and now he is a customer planning a fish stew, so the request is for mussels, clams, a piece of swordfish and “we’ll take the two sea bass and call it a day.”  Further discussion ensues about mackerel (“not your Boston mackerel, different taste, good in a tomato base, cut the mackerel into one-inch pieces, cut away the bone, put it in stock, etc”¦we’ll try a filet”).
Pura Vida’s Rick comes from a long line of fishermen. His grandfather came over from Norway, and his father and uncles started fishing after the Korean War.  His brother and cousins are all in the business.  At one time they were the largest fishing family in the state, handling over 6 million pounds a year in the ’90s. Their yield is less now, as they no longer fish for whiting and porgies, but stick to more of the “money” fish.
Based at Hampton Bays, Long Island, they travel from Massachusetts to Virginia, but with today’s cost of fuel they generally now fish no more than a day away.  Rick was on the Seafood Management Council for 8 years. “In the end I formed two fish co-ops, one in Montauk, one in Shinnecock, used to manage 20 million pounds a year.  Many from the co-op are now colleagues; I have access to their seafood as well.” In stock this week were bluefish, hake, grey sole, blackfish, black sea bass, ling cod, flounder, steamers, oysters and more.  Shellfish is kept separate for those who keep kosher.  Rick was recommending tuna, swordfish, and a whole fluke for grilling, or scallops for a shish kebab.  He says that he takes it step by step with customers, working with them slowly so that they wind up trying new things.
Working alongside Rick was his young nephew Alex, visiting from Costa Rica.  Rick’s wife is Costa Rican, and therein lies the source of the name of his company: pura vida is a greeting in Costa Rica, which means not only ‘pure life’ but ‘we wish you the best.’ “So we wish our customers the best,” says founder Rick Lofstad as a greeting party of customers interrupts to welcome Pura Vida to our shore.

The Cold Spring Farmers’ Market is located on the grounds of the former Butterfield Hospital along Route 9D, and is open every Saturday from 8:30 until 1:30.

3 thoughts on “We Wish There Were Fish”