Garrison School debates whether to commit to oil

The final plans for a $7 million capital project at the Garrison School collided last week with global warming as school board members pressed for consideration of a geothermal system as an alternative to new oil-based heating.

The board had been poised to schedule a referendum for Dec. 4 to ask voters to approve $7,047,620 in spending for infrastructure upgrades, including the heating system in the elementary school (the biggest-ticket item).

Instead, the board informally agreed to continue deliberations after some members urged a review of geothermal and other heating methods not reliant on fossil fuels, which feed climate change. Geothermal systems tap into energy naturally generated underground.

“A lot of us are uncomfortable about the idea of locking ourselves into a fossil-fuel system for the next 30 years,” said Board Member David Gelber, co-creator of Years of Living Dangerously, a documentary series on the effects of climate change. Gelber reminded his colleagues that in July the board unanimously passed a resolution pledging to fight global warming, including when making purchasing decisions.

The district began work on the capital project in 2015. Funding the project (without a geothermal component) would require “a slight tax increase,” said Jason Schwartz, an accountant with Bernard Donegan, a municipal consulting company. His firm projected an average marginal tax rate increase from 2022 to 2037 of 6 cents for every $1,000 of a property’s full value.

How Putnam Valley Did It

Geothermal now in place at all three of its schools

While investigating how best to upgrade the aging heating system in its elementary building, Garrison school officials made a visit to Putnam Valley, where all three school buildings are powered by geothermal.

Its latest geothermal addition, a heat pump system in the elementary school, was installed this past summer. The district put geothermal energy into the high school and middle school in 1997. 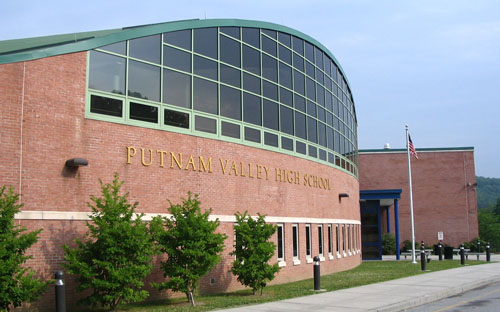 The high and middle schools rely on geothermal for 100 percent of heating and air conditioning, said David Spittal, the Putnam Valley district’s director of operations and transportation. In the elementary school, geothermal covers 65 percent of its needs.

Without geothermal the high and middle schools would each use about 50,000 gallons of heating oil annually, he said. The district expects the elementary school system to reduce its oil consumption by about 30,000 gallons a year.

EPCs run for 15 years and the one for the middle and high schools has been paid for, he said. But because the work was part of a package, the payback specific to geothermal isn’t easily isolated and the district does not have a savings analysis it could share, Spittal said. ConEdison estimated last year that district conservation efforts as a whole would result in annual savings of more than $380,000.

The state Education Department offers grants that amount to 10 percent of the cost of conservation projects endorsed by voters. In May 2017, Putnam Valley residents approved the elementary school geothermal system, 555 to 116.

“We are very proud that our past district leaders had the foresight to invest in such durable, clean energy solutions,” Spittal said.

The heating system for the middle school does not need replacement, according to school officials.

“We’re proponents of reducing carbon footprints,” but cannot recommend geothermal energy for the Garrison School, Hamlin explained. “We don’t see that as the best solution, the most cost-effective.” Outfitting older buildings can also be challenging and each geothermal installation is unique, making it hard to assemble data and compute typical savings, he said.

He added, however, that his firm would endorse geothermal if Garrison could achieve a payback in 10 years. He also noted that an elementary school geothermal system could be configured to allow expansion to the middle school.

Gelber argued it should not be difficult to compile data from other schools, such as Putnam Valley. “I’d be more confident in your opinions if you were able to present us with more facts,” he told Hamlin. He also noted that oil prices could fluctuate, complicating assumptions about the long-term costs of fossil-fuel systems. Nonetheless, he also said that “we’re not saying that no matter what the cost is, we want to do it.”

School officials said the district spends about $60,000 annually on oil, with about half going for the elementary school.

Board Member James Hoch observed that climate change “is already happening; my guess is it’s going to get worse,” with heavier, more frequent storms, severe flooding, and other weather conditions that could shut the school down and require make-up classes on hot summer days. He recommended they prepare now.

O’Rourke responded that a new, more efficient oil-based heating system would still be “entirely consistent” with the board’s climate-change resolution.

Some audience members endorsed further investigation of geothermal. Krystal Ford, who pushed the board to adopt its climate-change resolution, said that the state offered grants for clean-energy projects, while Madeline Julian, an architect who supervises heating and cooling projects in hospitals, said “we would never make a decision [based] on the information” given the district so far.

Julian proposed the district evaluate a number of alternative systems. “This is the only time we’re going to have to do this project” and the district should choose wisely, she said.

O’Rourke recalled that the last time the district undertook a major capital project — the middle school, finished in 2002 — a fierce dispute broke out. He expressed skepticism whether the pending project “would get a slam-dunk approval” from voters, especially if it included the expense of a geothermal system. “That’s not to argue against doing this,” only to recognize the challenges, he said.

O’Rourke observed that voters who do not have children in school — the vast majority of Garrison’s electorate — tend to reject spending projects. Asked if residents might rally around something seen as fighting global warming, he said: “Maybe. I just don’t know. We can be hopeful.”

A day later, O’Rourke added that a new federal tax law that limits the federal-tax deductibility of state and local taxes to $10,000 might also affect voter enthusiasm “for what some could view as non-essential elements of the project.”