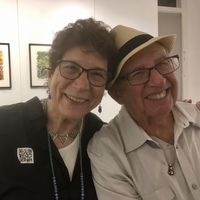 Sheilah Rechtschaffer, 82, an artist and social activist, died of cancer on March 13 at her home in Garrison.

She was born on June 6, 1938, in New York City, the daughter of Nathan and Charlotte Sarett. She earned a bachelor’s degree in education in 1959 from Boston University and a bachelor of fine arts in 1981 from SUNY Purchase. Her artwork was shown that same year in a gallery for the first time, in White Plains.

Sheilah met her future husband, Dr. Bert Rechtschaffer, in New York City in 1961, when they worked on different floors of an advertising agency. Bert had enlisted in the U.S. Air Force as a dentist and taken a temporary job while waiting for his certification.

“I sat next to the Verifax machine,” Bert recalled in a 2017 interview. “She’d come down, come off the elevator…  I invited her to dinner, but she was already preparing hers, and invited me to join her. We went to the Pioneer Supermarket below where she lived and got a few things, including their best dollar wine. She had her childhood piano in the apartment. Dinner was perfect. I didn’t make a pass at her, because it was too hot and she had no A/C.”

After Bert was assigned to serve at a base in Goose Bay in Labrador, Newfoundland, they kept up a long-distance relationship. When Sheilah visited, Bert recalled he was in the middle of making a martini for her “when the phone rings and it’s my commanding officer, who says, ‘There’s a retired general here, I want you to come over.’ When we got there, Sheilah started preaching to the guy about disarmament. I was kicking her under the table.”

The couple moved to Garrison in 2000, after dividing their time between Manhattan and Croton, where Bert had a practice for 30 years. Sheilah recalled in 2011 that they made the move because she knew people and the Garrison Art Center. “We just wanted to be in a beautiful spot,” she said. They found a home with a shed that she converted to a studio.

“I think most good art is made in the subconscious and only becomes clearer as you stay in the game,” Sheilah told The Current in 2016. “Being this age, my work is always going to retain a sense of who I was when I was coming of age. I was so influenced by abstract expressionists and coming out of the W.P.A. [Works Progress Administration] movement to a more instinctive impetus.”

Sheilah said her work had always “interfaced with the political,” nonetheless she described herself as a “romantic optimist” at heart, who “wants to create beautiful images that are inspirational. It’s just that my work is specifically made to reflect something that is happening.… I’m trying to find a center, because when the center reacts, that’s when change happens.”

Her recent art was very different from what she created in the 1980s, when she made “enormous paintings which I never gave any thought as to how I would store them.” She lamented the increasing “international corporatization of art galleries, and a public that isn’t really educated a lot about general art.”

Regardless, she said it was important to keep reinventing her art. “It’s the older person’s inclination to rely too much on the older stuff, because you have so much in your brain, repetition happens,” she said. “You get stale because you rely on knowledge rather than the derring-do of youth.”

Sheilah taught fresco painting, color theory and pastel at Parsons School of Design and at the New York Academy of Art. In 1992, with Livia Monaco, she co-founded and, for the next eight years, served as an instructor and co-director for, the nonprofit Accademia Caertie Inc. in Ceri, Italy, a workshop dedicated to continuing the traditional techniques of fresco painting and scagliola. In 1993, she co-curated a groundbreaking exhibit called Fresco: A Contemporary Perspective at Parsons and the Newhouse Center for Contemporary Art.

She had many solo shows of her pastels between 1985 and her death, including at the Van Brunt Gallery in Beacon in 2006; the Garrison Art Center in 2011; Hudson Beach Glass in Beacon in 2011; and the Buster Levi Gallery in Cold Spring in 2016. She also contributed pieces to the Collaborative Concepts shows at Saunders Farm in Garrison (six times between 2007 and 2016) and to Artists on Location at the Garrison Art Center. Her most recent series included Threads, Green in Vietnam, Memory Language and Listening to Jazz: A Journey.

From 1999 to 2009, Sheilah and Bert traveled to Brazil, St. Lucia and Vietnam to perform volunteer work through the East Meets West Foundation. He volunteered as a dentist and she taught art classes to orphans and underserved children.

Along with her husband of 58 years, she is survived by her children, Jonathan and Jessica; her daughter-in-law, Debbie; and a granddaughter, Zoe.

A graveside service was held March 16 at the natural burial grounds at Sleepy Hollow Cemetery. Memorial donations may be made to the Sugar Law Center for Economic & Social Justice (sugarlaw.org); the Garrison Art Center (garrisonartcenter.org); the Coalition for Institutionalized Aged & Disabled (ciadny.org); or the National Jazz Foundation of America (jazzfoundation.org). Condolences may be sent to P.O. Box 79, Garrison, NY 10524.