“My work is specifically made to reflect something that is happening”

In 1994, for reasons that still remain mysterious to her, Sheilah Rechtschaffer made a painting depicting mountains above a fire in a lake, set, at least in her mind, in Vietnam, a country she had not, by that time, visited.

“It came from the unconscious, the inexplicable, and it was apart from the other stuff I was doing at that time, which was abstract work, moving towards landscape representation,” she said. “I was always interested in landscapes, but not views. Little places, muddy places, not monumental vistas.”

That unconscious work predated Rechtschaffer’s many later trips to Vietnam, which began in 2003. Those trips provided the much more literal inspiration for a large body of Rechtschaffer’s work, celebrating the regeneration of that country after the war. 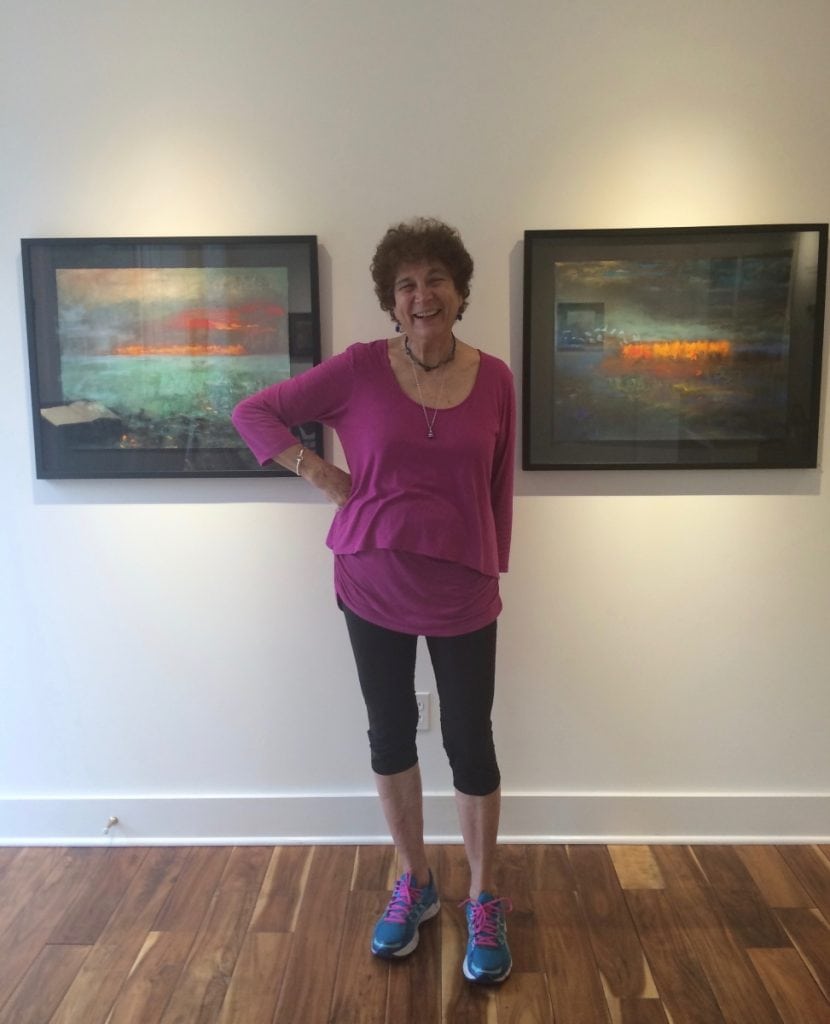 Sheilah Rechtschaffer, pictured at her opening at the Buster Levi Gallery.  (Photo by Lucille Tortora)

Now both that initial painting and all the work which followed have contributed to another series, one in which Rechtschaffer has changed her palette from the lush, verdant greens of the Green In Vietnam series to, as she puts it, “darker earth colors” representing fire and elements of water, earth and air and the increasing shadows of environmental rupture and global warfare — as well as an unshakeable beauty.

As Rechtschaffer writes in her Artist Statement for THREADS: new pastels, the exhibition of this new work on display at Cold Spring’s Buster Levi Gallery, “Emotional statements of beauty are important to me … to slow down and think and work towards the prospect of awareness, involvement and peace.”

Also in her statement she relates a remark that her art school history professor, Irving Sandler, told the class, many decades ago: “Artists reflect the world in which they live, and in doing that, often predict a world that is to come.”

“I think most good art is made in the subconscious and only becomes clearer as you stay in the game,” Rechtschaffer, who is proudly and actively 78, says. “Being this age, my work is always going to retain a sense of who I was when I was coming of age. I was so influenced by abstract expressionists and coming out of the W.P.A. movement to a more instinctive impetus.”

Rechtschaffer’s work has always “interfaced with the political,” nonetheless she describes herself as a “romantic optimist” at heart, who “wants to create beautiful images that are inspirational. It’s just that my work is specifically made to reflect something that is happening. This new work is darker, less optimistic than the [previous] Vietnam series because there are real decisions facing us now, that are monumental. But I’m trying to find a center, because when the center reacts, that’s when change happens.” 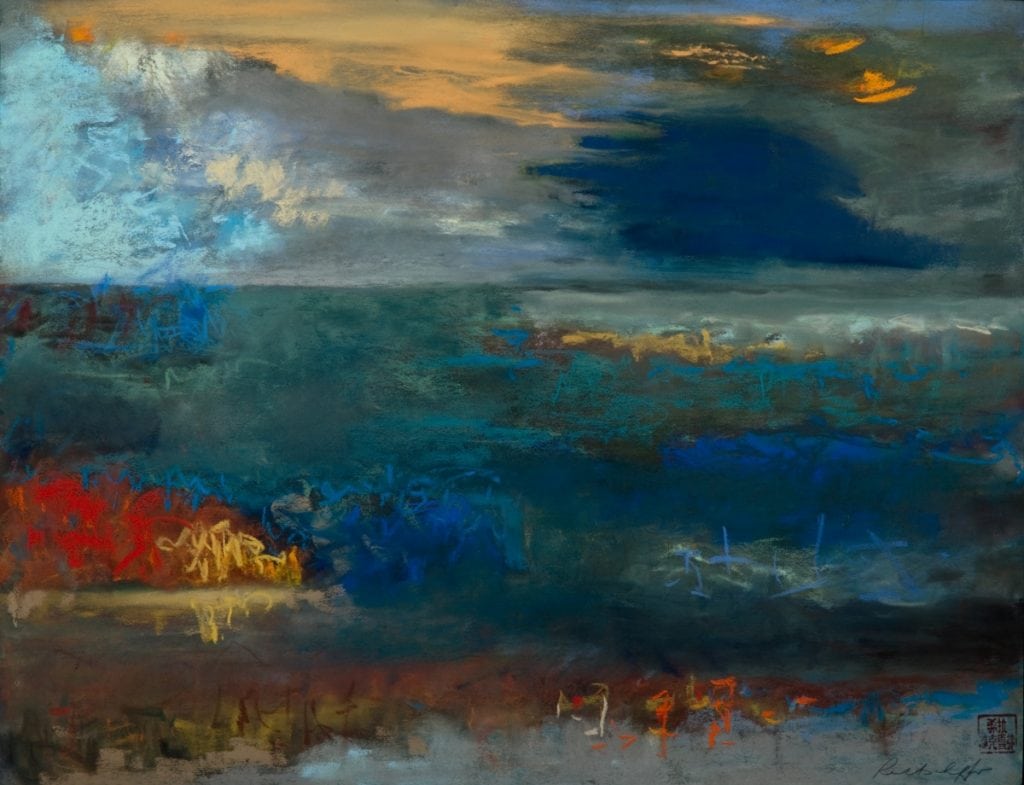 “Twilight on the Sea,” by Sheilah Rechtschaffer (Photo by Howard Goodman)

All of these new works were done in pastels, a medium Rechtschaffer is very familiar with and comfortable working in. That was critical because she had only two months to produce an exhibition’s worth of artworks, no small challenge for anyone, yet alone someone still recovering from a hip replacement operation.

Yet it proved galvanizing in the best way, with Rechtschaffer spending hours on end, sometimes until 2 a.m., in her Garrison studio, working. Friends came and helped her build a painting rack, as she was unable to climb a ladder to hang her work. She got it done, despite the physical limitations which come with age, something she grapples with but doesn’t despair over.

“As an older artist, I recognize that it’s very important to not take everything on. Your energy is limited and you can’t stand in front of an easel for hour after hour. You have to accept that and proceed accordingly.”

It’s all very different from the 1980s, when Rechtschaffer was making “enormous paintings which I never gave any thought as to how I would store them.” Nowadays she laments the increasing “international corporatization of art galleries, and a public that isn’t really educated a lot about general art.”

Regardless, it’s very important to Rechtschaffer to keep reinventing her art. “I try very hard to keep inventing. It’s the older person’s inclination to rely too much on the older stuff, because you have so much in your brain, repetition happens. You get stale because you rely on knowledge rather than the derring-do of youth.” 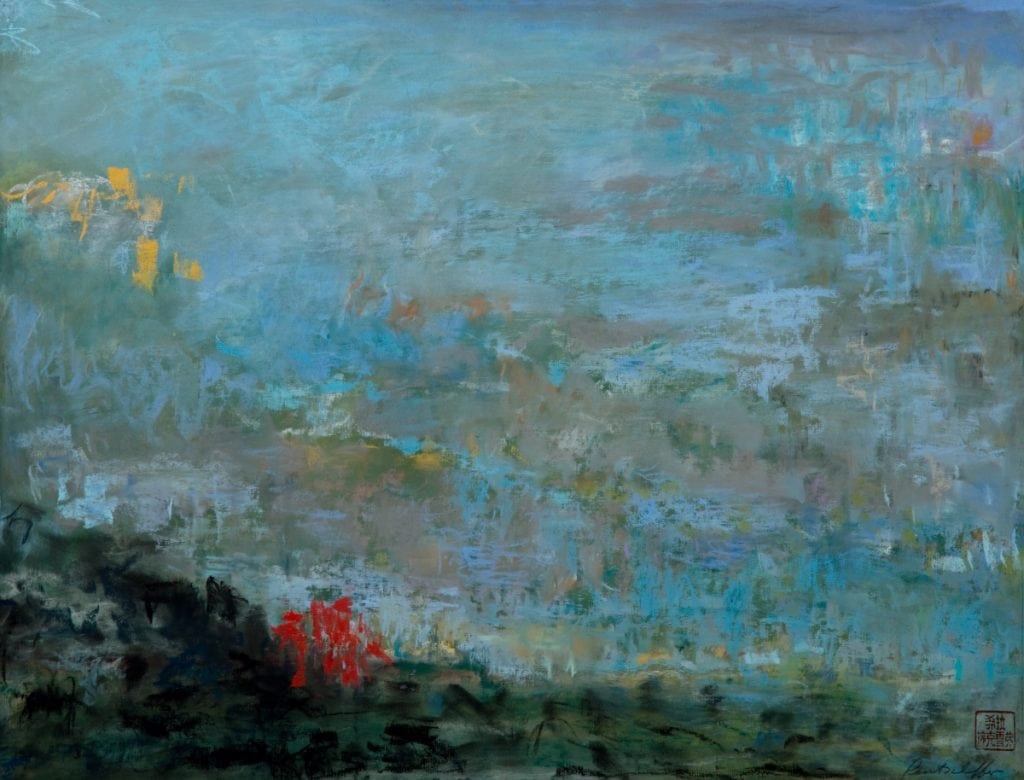 “The Messenger,” by Sheilah Rechtschaffer (Photo by Howard Goodman)

Oftentimes, Rechtschaffer re-works her work, over and over again, something she is able to do due to the nature of the pastels and the strong Vietnamese bamboo paper she uses. She is able to resurface all or part of her drawings, using an acrylic liquid which, when put over existing pastels, muddies them in a way which allows her to play with them. “Sometimes I use totally coated paper. When you work on it, you can find “new” colors … They’re spontaneous, but I think about them and revise them if I don’t get it right.”

One constant in Rechtschaffer’s life, which has never needed a wholesale reinvention, is her marriage; she and her husband Bert just celebrated their 53rd anniversary. Bert, who plays jazz piano frequently in a trio, often at the Chill Wine Bar in Beacon, plays every morning. “It’s an incredible joy to hear him. We’re so blessed; it’s a gift.”

THREADS/New Pastels/2016 will be on exhibit at the Buster Levi Gallery, located at 121 Main St., Cold Spring, through July 31. Gallery hours are Friday through Sunday, 12 to 6 p.m., or by appointment. For more information, visit busterlevigallery.com or sheilahrechtschaffer.com.

One thought on “Sheilah Rechtschaffer: Staying in the Game”