Putnam County Sheriff Donald B. Smith reports that his Narcotics Enforcement Unit has completed its annual county-wide marijuana eradication program. Throughout the year, members of the Unit, in conjunction with the United States Army Reserve Aviation Unit, conducts airborne surveillance of Putnam County. Investigators identified, located and harvested more than 125 marijuana plants ranging in size from 4-10 feet tall.  These “gardens” were located in wooded areas in the Towns of Kent, Carmel, Patterson and Putnam Valley.
Sheriff’s narcotics investigators seized marijuana plants from a private residence on Fair Street, in the Town of Patterson and another residence on Somerset Lane in Putnam Valley.  Both homeowners were charged with 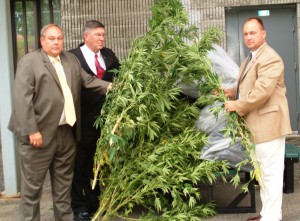 unlawful possession of marijuana and unlawful growing of cannabis.  They are due in town court to answer charges at a later date.
“Members of the Narcotics Enforcement will continue to monitor suspected areas where clandestine growth operations are maintained,” said Sheriff Smith.  “We will continue to combat illegal drug activity in Putnam County by land, air and sea to keep Putnam the safest county in the Hudson Valley.”