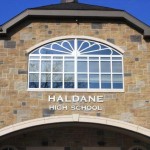 Story and photo by Michael Turton

Haldane High School’s policy regarding which students can leave campus for lunch has evolved in recent years – – in large part due to the school’s rather unique set of circumstances. It is a very small school with just over eight hundred students in grades K-12. Add to that the fact that there is absolutely no extra space – – virtually every room is used at all times. Add to that a crowded cafeteria and the fact that unlike many other high schools, Haldane is located within a village within a few blocks of many students’ homes and local restaurants. Add to that Principal Brian Alm’s belief that students should gradually be given more responsibility for their own actions as they get closer to graduation and you have the current policy: only juniors and seniors get to leave campus for lunch. “It’s a graduated system of responsibility and independence” Alm said.
It wasn’t always that way. When he arrived at Haldane in 2008, students in grades 10-12 were allowed to leave campus during one of three lunch periods. Since that time Alm has phased in a new policy with only one, 42-minute lunch hour. Alm feels this reduces absenteeism and facilitates student participation in clubs that meet at that time. Alm said that the change has been very well received by families.

While the PTA has never discussed the issue, its president, Maria Leiter, has her own personal opinion. “I went to a high school that allowed all students to leave for lunch.  It was liberating, and for me, it was an important part of discovering my independence.  But then, it would not have occurred to me to spend the afternoon drinking or doing drugs.  I hope a few bad actors, or worse, a preemptive fear; do not ruin the chance for everyone. I would hope that in our small community, we can find a way to give our kids this experience.”
There are reports of students seen smoking in off-campus areas during lunch. Reports of students drinking alcohol or doing drugs vary widely. What doesn’t vary is Alm’s approach. “It’s a zero tolerance policy” he said. Alm said that incidents involving students returning to school under the influence of drugs or alcohol are rare but that the penalties are stiff: a minimum suspension of five days. Repeat offenders may be suspended for up to a year.
Maureen Kazel supports the current policy of allowing only juniors and seniors to leave campus. Her son, Bobby Vahos, a junior, comes home for lunch but to Kazel, freshmen and sophomores are a different story.  “I wouldn’t like my kids going off campus at that age. That’s just leaving them open to doing things that might get them in trouble.” She also has two daughters at Haldane: Brooke in 6th grade and Kelly in 8th grade.
Bobby agrees with his mom – but only to a point. He appreciates the way he is treated as a junior but wasn’t so happy a year ago. “I can understand freshmen having to stay at school but as a sophomore it was annoying. It’s nice to be able to leave and go home for a break.” As for kids getting in trouble over lunch he doesn’t see that as an issue. “It’s not like anyone is going to do anything stupid over lunch. If they wanted to do that – they’d just leave.”
Oriana Pavlik, also a junior, agrees with Vahos. “I didn’t mind staying on campus when I was a freshman. But when you’re a sophomore kids start having cars and it would be good to be able to leave for lunch”

Close the campus?
Dave Merandy, president of the Haldane School Board looks at the lunch policy from a very practical view point but gets uncomfortable when the conversation shifts to students driving to lunch.  “It’s really about it being too crowded in the cafeteria.  The lines are already long. If we had our way we’d close the campus but that would be very hard to do. One of the issues is that kids drive up to MacDonald’s. I’d really rather not have responsibility for four or five kids in a car.”
Alm agrees that closing the campus would be difficult. And it would come at a cost. “It would be very expensive. You can’t put a price on safety; however, we would need significant increases in staffing as well as infrastructure.”  Additional classrooms and student parking were among the needs Alm identified.

Preparing for the future
For Alm the biggest factor behind the policy relates to student responsibility and preparing them for the future. “We’re looking for the right balance in a village community.”  He believes the current policy helps to gradually prepare students for college. Alm said it would be difficult for students to go from a high school where they were not allowed to leave campus and straight to a college where they would be totally free to do whatever they want. While seniors and juniors are allowed to leave campus, juniors must attend all study halls. Seniors are free not to. “We have to ease students into independence by the end of high school.”
Under the current policy sophomores are given a little more leeway than freshmen who are restricted to eating in the cafeteria where attendance is taken daily.  Tenth grade students can eat anywhere on campus — but cannot leave the school grounds. “It’s based on the honor system” Alm said. “If a sophomore leaves campus and is caught then they lose the privilege and are required to eat in the cafeteria.”

The youngest drivers
Like Merandy, Alm does have concerns about students driving cars at lunch and defends the policy of not permitting 10th grade students to leave school grounds. “Some sophomores are old enough to get behind the wheel in the spring. They’re the newest drivers on the road.” Alm said that a 42 minute lunch period can feel pretty rushed, and in his mind that is another factor that speaks against allowing sophomores to leave – -especially if they are driving a car.
Alm also feels that the current lunch policy is appropriate in terms of reducing the likelihood of drug abuse among younger students. “Freshmen and sophomores are more likely to make a bad decision” he said, adding that he wouldn’t want to “institutionally facilitate those bad decisions” by allowing them to leave campus every day. One student who asked not to be identified had a different opinion. “It’s really not about them being juniors or seniors. In every school there is a group of kids who will do it. They’ll just do it – – no matter what grade they’re in.”

Local restaurant owners also have a stake
Tom Merrigan operates Pali’s Deli and laughs when he says he would have no problem if Haldane decided to allow all students to leave campus. “We do a good amount of business from the high school.” He said that students have learned to use their limited time wisely. “One student will use their cell phone to call in orders for a bunch of them.” Merrigan has nothing but praise for the students’ behavior while at his deli. “I’ve never had a problem.” The secret to that is pretty basic in his mind. “If you don’t treat them like idiots they won’t act like one.”
Jesse Lupo, a partner in Cup-o-cino, thinks the current policy is sound. “I think it’s good that only the juniors and seniors get to leave the school.” She said her shop doesn’t do a great deal of high school business over the lunch hour, possibly because lunches are a bit more costly. Lupo also said that behavior is not an issue when high school students do come in. She has even seen adults ask students why they aren’t in school if they show up in her shop at an odd time. “It’s one of the advantages of being in a small town. Everyone knows everyone” she said.