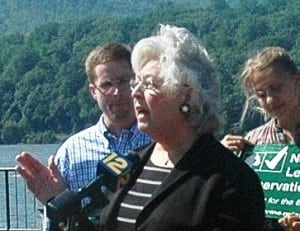 Leibell, a Republican often worked closely with Galef, a Democrat, on matters involving their mutual constituency in Putnam County. He pled guilty on Dec. 6 to federal charges of attempted obstruction of a federal grand jury investigating extortion and falsely filing federal tax returns that omitted at least $43,000 of income in cash payments. Elected in November to the post of Putnam County executive, he now faces a possible prison term of up to 13 years and awaits sentencing next March, according to information from federal prosecutors.

“I was shocked and extremely disappointed to hear about these charges and the guilty plea - by a “long-time colleague,” Galef said in a letter to Philipstown.info. “These charges underscore our immediate need to establish criteria for the distribution of member items, something which I have long advocated.” Member items involve legislative discretionary spending. “As public officials, we are public servants and individual corruption stains us all,” said Galef, who represents the 90th New York State Assembly District. “I certainly hope we can learn from this unfortunate situation and better align our standards of operation on member items with the high standards we expect from all public officials.”

According to a Department of Justice statement released on Monday by the United States Attorney’s Office for the Southern District of New York, the Leibell “investigation focused on whether Leibell had demanded and received cash payments from an attorney – who provided legal services to a Putnam County based not-for-profit organization that received millions of dollars in New York State Senate member-item grants that Leibell sponsored as a state senator.”

Galef wrote that “in addition to establishing standards, we must preclude a legislator’s ability to establish a not-for-profit entity using member items or state grants. I will introduce legislation with such a prohibition so that if member items continue to be part of our system, at least we can prevent their abuse.” She said that no new member items were included in the 2010 budget.

The veteran assemblywoman noted that member items have been an issue before in cases of criminal charges against a state senator. “I have always had a problem with our system of legislative pork, and have never taken member items, even when I was criticized for not doing so,” she said, citing her introduction last year of legislation to change the system. “Now is the time to institute these reforms,” she added.