The first half of the March 2 Cold Spring Candidates’ Forum hosted by Philipstown.info featured a conversation with the two candidates for Mayor: the incumbent Seth Gallagher and former mayor Anthony Phillips. The early part of that discussion focused on nuts and bolts issues like the Village budget. In the latter part of the conversation, moderator Gordon Stewart shifted the focus to much broader and forward-looking questions about the nature of the village. Stewart’s questions have been condensed and candidates’ responses have also been shortened to capture the essence of what was said.  A video of the complete conversation is available on Philipstown.info.

Stewart: If asked about the future of Cold Spring, I’d have to say I’m really not sure. I can imagine a future where we continue to improve economically; a Main Street that is more vibrant, a magnet. Or I can imagine the opposite – we have slipped a bit; there’s a boarded-up feeling; divisions between those who have been here a long time and more recent residents have become deeper; we become a place that is less attractive. As mayor, what would you like to lead us to? What do you want to protect us from?

Anthony Phillips:  Obviously tourism is a very important part of our business community. There is a fine line that you have to draw between promoting it, getting too much of it – and the residents of the village. They have to be protected. Weekends are very difficult for residents.
A lot of the businesses here, the owners, don’t live in Cold Spring. There’s quite a few. Some do [live here]”¦.Weekends here in the business sense are good for the eateries. Some of the businesses that just sell whatever are struggling. They’re struggling badly. Because of the economy. Parking. What Seth did was a good idea. Maneuver parking so that it isn’t such a burden on businesses. 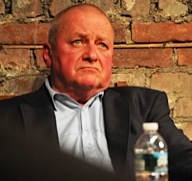 At one time we promoted parking meters – to move traffic along, to get revenue from the people that live here. We love the businesses that are here, want to see them prosper – but some of them, to be perfectly honest, are selling wares that people aren’t buying now.
There has to be serious discussion. The Chamber of Commerce has new officers now and they have a lot of enthusiasm. I’m hoping that they come up with some good ideas along with residents and that we can get a better community than we’ve had in the past. But to be honest with you – I kinda like this place. I’m not saying it’s going downhill. I’m happy with what we’ve got here. There is room for future improvements.

Seth Gallagher: I would agree largely with Anthony. There is a balance. There’s supporting the business community but there’s also the interests of residents. I’ve been to places that are so commercialized, like New Hope, 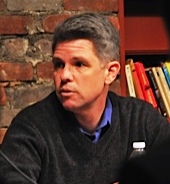 Pennsylvania, that you can’t even get in there on weekends. It is a commercial center and you don’t feel it has the continuity that Cold Spring has. I think we have to take things slowly”¦ do things so that business can succeed, such as cutting red tape. That was something I tried to do with the bill of rights – to get boards to be more responsive to applicants, to make it easier to start a business, make it less frustrating.
When we have some of these events that we have that can help”¦it’s nice when events appeal to locals and outsiders so that everybody get something out of them. That can be a shot in the arm for business.

Stewart: Do you think there are things you could do to bring people more together? Making it more about Cold Spring and not we’ve been here a long time, know what is and what works – or the reverse – that we’ve come here from somewhere else and we know what works in the outside world and we’re going to shake things up. Is there anything you can do?

Phillips: My father was born in Italy. People here used to kid him about being a carpetbagger – he only lived here 85 years. Most of my neighbors on Main Street are young. I meet their kids. I plow the sidewalks for them. We have cookies for them and the whole nine yards. My wife likes it. So I’m not one of the ones who, because I was born here, says we have a problem with new people coming in.
I can’t say there is a problem that needs to be discussed. I don’t know that it’s  a major problem. I don’t have a problem with new people coming into our community as long as they don’t have a problem with us. I have a major problem with someone wanting to put and eight or ten foot high fence up because they don’t want to look at their neighbor. That’s a problem with me. But the rest of it- I’m fine with it.
Gallagher: I think it’s something that works itself out. Some issues may seem to break down that way but I think that’s over simplifying it. When we have events – the Halloween parade, Community Day – people really do come together and they meet their neighbors. People who are new I think look to their neighbors to get a sense of the history and I think people who have been here for a while look to their new neighbors to find out what kind of people they are – and find that they are nice people and have things to contribute too.
I don’t see that as a problem – if anything that’s kind of what makes Cold Spring interesting. You’ve got people who’ve lived here their whole lives whose parents are here and who can tell you the history directly. And then you have new people coming from other places. Sometimes they have ideas, but they’re here because they love this village too and they’re coming to know and love their neighbors who have been here a long time.

Stewart: What about twenty-somethings? Where can I find some of them here who want to be involved? They seem to leave. Is this something we can’t do much about? Is it the wrong employment base? We feel we’re kind of hollowed out in that generation. Is this the state of nature?
Phillips: Thankfully I can say that the majority of my family stayed here. I have an older son who moved to Chicago. He’s very successful there. What he was looking for he couldn’t get here. I think when you are that young it depends what your plans are. You’ve got one of the world’s biggest cities 50 miles away. But if you’re not happy, not so much with the area, but with what you’re doing here”¦that’s the way it is.
I don’t want to hear the fact that we can’t afford to live here. I’m retired. I can afford to live here. My sons are here. We’re making it. I think it has to do with the person – what’s in his mind. We’re getting people who didn’t want to stay in New York City and are coming up here – and that’s the system.
Gallagher: I think it’s kind of natural.  You get in your twenties”¦ this is not really a place to meet someone. There are not a whole bunch of people in that age range. I think what you’ll find is that people go somewhere else, meet someone then come back and settle down. So you have a great number of people in their 30s or 40s but not a lot in their 20s. But people do come back here and I think it’s good for the community.

Stewart: If you were to come back here 30 years from now, would you expect to see a Cold Spring more or less like what we have now?
Phillips: If I come back in 30 years I may not remember  what Cold Spring was like! I “¦don’t have an answer for that one.
Gallagher: I would hope so.

Stewart: We’re almost out of time. Is there anything either you would like to say? Why you’re running, what you’re thinking, what you’d like to do?
Phillips. No, I’m fine. I’ve said enough. I think everybody understands what my ideas for the community are. I’m back in it because I did it for 16 years, I’m healthy, I’m comfortable and I’d like to do it over.
Gallagher: There’s just one thing that has been in the papers – about personnel  issues and such. Normally we don’t discuss that in public but I will say that the employees of the Village are very happy with the way I’m managing the Village. We are in negotiations with the police department. We’re negotiating in good faith and they understand that. I think they are happy with the way the Village Board is running the police department.
I do know that the Highway Department is happy with the way it is being run. In the past there had been a “contract” but we cannot legally have a contract with employees that are not union, so what we have now is a handbook for employees. So rather than looking a few years in advance for salary increases – because we can’t obligate a future board to expenditures unless it’s a union contract – we deal with it every year and try to deal with it in a very stable way. So if they have certain expectations we really try to stick to a very even percent increase that is easily predictable.
Photos courtesy of Aaron Freimark.

A video of the complete 90-minute Cold Spring Candidates Forum is available on Philipstown.info. The first 45 minutes features the above discussion while the second half includes Gordon Stewarts’s conversation with the three candidates running for two trustee positions: incumbents Bruce Campbell and Ralph Falloon; and challenger Catharine Square.