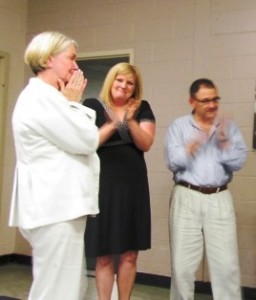 Maggie Davis (L) with Trustees Gillian Thorpe and Joe Curto, learns new playground to be named in her honor

The July 7, 2011 meeting of the Haldane Board of Education was a very personal one and emotionally charged. School Board President Dave Merandy, Vice-president Joe Curto and Trustee Mike Junjulas often had difficulty holding back the tears as they said goodbye to a number of retirees with long and distinguished track records.  Superintendent Mark Villanti called it a “bittersweet” moment as he wished the retirees well in the next phase of their life. “There is some sadness here. We are losing people who have been the heart and soul of this school district. It’s different in a small district like this. They have been part of the very fabric of this community,” Villanti said. 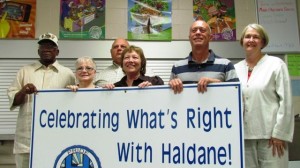 Maggie Davis, retiring as principal of the elementary and middle schools after 11 years, received warm words of praise from each of the board’s trustees and Villanti. She was also genuinely surprised and moved to learn that a pet project of hers, the new playground, has been named in her honor.  Other retirees honored for their remarkably long careers at Haldane include: teacher aide Pat Mazzuca, 32 years; Phil D’Amato, Spanish teacher, 29 years; Nancy Nochese, typist, 31 years and Dennis Cairl, social studies teacher, 29 years. Sanders Mathews, Haldane’s own and very popular “Buffalo Soldier” is also retiring after six years as a driver and cleaner. That relatively short tenure can be misleading. Students threw “Matty” a surprise 90th birthday party just a few months ago. 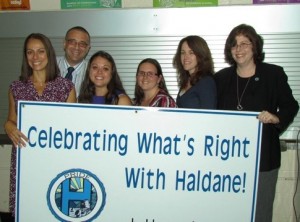 At the other end of the spectrum it was also a night to recognize teachers and members of the administration who have been granted tenure. They include Erica Dubrawski, speech and language teacher; Lou Sassano, math teacher; Kristen Savastano, math teacher; Jennifer Minutillo, special education teacher; Kimberly McCollum, sixth grade teacher; and Jennifer Wilson, Director of Special Services. 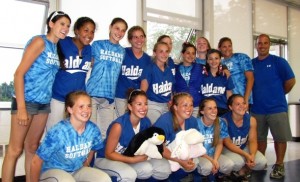 During the reception to honor the retirees and tenured staff, the Haldane girls’ softball team entered the cafeteria to a very hearty round of applause. The team was still flush from its victory over Tuckahoe earlier in the day. That victory means that, for the first time in Haldane history, the girls’ softball team will advance to the state final four tournament.
Photos by M. Turton