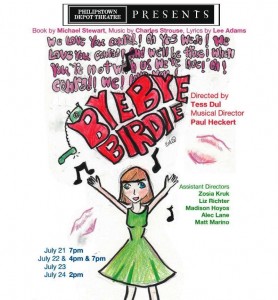 The hair is slicked back, the poodle skirts tight at the waist, “We love you Conrad” is on the tongue of every teenage girl, and the guys aren’t sure why the girls are so crazy.  Here’s the story: Conrad Birdie, the rock and roll heart throb of the day, has been drafted.  The head of the Almaelou Talent agency, Albert, is frantic because he will be losing his top client.  His faithful but frustrated secretary, Rosie, saves the day by coming up with a plan for Conrad to sing a new hit, “One Last Kiss” and kiss a girl from Sweet Apple, Ohio live on the Ed Sullivan Show.
This ever- popular musical, which opened on Broadway in 1960 — not so coincidentally as Elvis’ popularity surged — was composed by Charles Strouse, with lyrics by Lee Adams, and book by Michael Stewart. Bye Bye Birdie played on Broadway for 607 performances at the Martin Beck Theatre and 268 performances in London at Her Majesty’s Theatre. 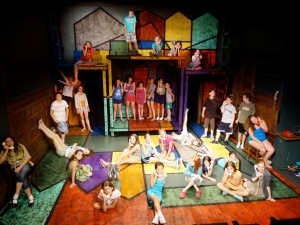