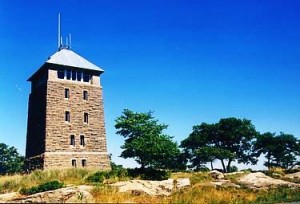 Tower at the top of Perkins Memorial Drive

Long before moving to Philipstown, long before kids, a house and a wife, my friends and I would often cram into a car and drive from Queens to watch the sunset from the tower atop Perkins Memorial Drive. Flash forward to today, when, for 11 years, I have lived a stone’s-throw away, and I have visited less than a handful of times. Not more than a 20-minute drive from Cold Spring (across the Bear Mountain Bridge) the tower is a glorious place to relax at the end of the day.

Constructed through the generosity of descendants of George Walbridge Perkins Sr., first president of the Palisades Interstate Park Commission, a trip up the Memorial Drive and a visit to the Tower is one of the many highlights of Bear Mountain State Park. Situated 1,305 feet above the Hudson River, the 360 degree panoramic views from Perkins Tower are spectacular. The observation floor has interpretive displays that describe the distant scenery.

Four states (New York, New Jersey, Connecticut, and Pennsylvania) are visible, and the NYC skyline is a dominant feature. You can also see several nearby mountain ranges, including the Taconics, Hudson Highlands, Palisades, Ramapos, New Jersey Highlands, Moosic Mountains, Shawangunks, and even the Catskills.

From the tower, one can see an unique view that includes the Bear Mountain Bridge, West Point (United States Military Academy), Storm King Mountain, and historic Fort Montgomery, where patriots stretched an iron chain across the river to hold back the British navy during the War of Independence. Those wishing to hike to the top from the base of Bear Mountain can climb the newly constructed Appalachian Trail on the mountain’s east side, which includes 800 stone stairs and is considered one of the most beautiful new trails built in the last 50 years.

Besides the incredible views, the story of the Palisades Interstate Park Commission is told through text and photos as you walk the stairs to the tower room. Daily hours are 8 a.m. – 4 p. m., Monday through Sunday.