Despite Cold Spring’s current reputation as a music town, most of what’s heard is in the singer/songwriter folk/rock vein, with a little bluegrass and its cousins thrown in.  What has been lacking, on a regular basis, since the closing of the Old Post Inn (which was located near the foot of Main Street, and was a venue for “music, dancing and good company,” according to a long-time resident) around 15 years ago, is, in the words of saxophonist and part-time Cold Spring resident Rob Scheps, “the major American art form,” jazz.

Scheps hopes to change all that with an open-ended weekly series of gigs at the Silver Spoon Restaurant.  With room enough (in the front window area) for a duo, or a tightly-squeezed-in trio, Scheps has cast his net for a wide variety of musicians who will join him, on a one-each-week basis to play a set or two of jazz at the casual eatery.  Patrons can eat a full meal and listen in, or perch themselves at the bar if they prefer.  Scheps says he wants to “make it a forum for musicians who are touring – hopefully I can grab them for a gig here. So far everyone has been incredibly enthusiastic. I’m trying to bring some of the best jazz musicians in the world here.”

The evenings began over a month ago and have been pulling a good crowd of locals as well as out-of-towners (drawn thus far from Beacon to Brooklyn, and even from Montpelier, VT) eager to hear the jazz.  Scheps calls the“social component” of the evenings “very pleasurable, and as important as the musical component. It’s not just about hearing jazz – it’s a social event, a ‘hang,’ a place to convene, a place to meet other people.”  Quite a few patrons have returned for multiple shows.

Scheps and the Core-tet at the Chapel Restoration last June (Photo by K. Foley)

The musicians hail from as close as Putnam Valley and as far away as Portland, OR., where Scheps lived for a number of years and where he still spends time. Most of the guest artists have played with Scheps before, either as members of his 5-piece band Core-tet, which recently performed to a capacity audience at the Chapel Restoration, or through his many years of playing and touring.  Included in the line-up is John Abercrombie, whom Scheps calls “one of the four or five most prominent jazz guitarists in the world.”

Scheps grew up knowing his calling as a musician.  He attended the Manhattan School of Music’s Prep Division while he was in high school, and spent his teens listening to lots of live music. Studying at Boston’s New England Conservatory, he returned to New York City at age 22, “lock, stock and barrel” ready to becoming a working musician -something he has been able to do ever since.  Dividing his time between the coasts, Portland (where he has a 16-piece Big Band and works with the Oregon Symphony) and Cold Spring, Scheps has adapted in order to survive. “Versatility is the key, the only mode of survival in the present economy.  Everyone has to diversify or they won’t work.  I play mostly jazz, but also funk, classical, in the orchestra at Broadway shows - I even got asked to play a John Coltrane piece at a funeral – I am lucky because a really high percentage, maybe eighty to 90 percent, of my work is in jazz, but to do that I have to tour.  I go to places where I’ve been many times before, where I know I’ll have gigs I can count on.  I have regular bands in places like Kansas City, Vancouver, Des Moines, not just pick-up bands.  And these are New York-quality musicians; most of them have spent time in New York City because New York, along with Los Angeles is still the most important proving ground.”

Scheps also works frequently in the Hudson Valley, playing “all over, from Kingston to Newburgh, down to Yonkers.” Scheps landed in Cold Spring about six years ago because he was “looking for something which looked and felt like Vermont, but was closer to New York City;  a small village close to nature and Manhattan.”  With the Silver Spoon series taking root, he’s excited about being able to have “a regular opportunity to ply my trade at home, as well as giving people an opportunity to hear this music.”  My musical partners are hand-picked -great players I want to collaborate with.  I’m trying to keep it different each week.  They each offer a different style within the jazz realm.  There’ll be Coltrane, standards, bossa novas; we’ll be going with the strengths and experience of what each musician does well.” 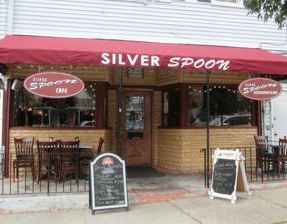 Scheps said that a colleague of his, Beacon musician David Dasch was the one who approached the Silver Spoon with this idea. Dasch “made it happen.  He went to the Silver Spoon after hearing the concert at the Chapel,” according to Scheps.  Silver Spoon owner, “Jimmy,” was immediately responsive and has been “very magnanimous and hands off, he basically said ‘trust you’ [to] do what you do.”  Scheps also noted how helpful the Silver Spoon staff has been, naming waitresses Scotti and Angelica as “in our corner. They are very helpful and make it easy for us to play our music – a sympathetic staff makes it happen.”

Upcoming musicians, with descriptions from Scheps, include:

Aug. 4 and 11:  Francesca Tanksley.“She’s one of the great jazz pianists.  We are really simpatico and have a repertoire together. She teaches at The New School, and she’s been part of the Billy Harper Quintet for 20 years.  We’ll be playing Billy’s music in this gig.”

Aug. 18: John Abercrombie.“One of the four or five most prominent jazz guitarists in the world.  He doesn’t live far from here and we’ve been playing.  I would strongly suggest reservations for this one or you won’t get a seat.”

Aug. 25: Gary Versace. “He’s a piano player; based in Peekskill when he’s home. He plays with Maria Schneider and Madeleine Peyroux.  With almost all of these players the connection goes way back – these are old relationships.”

Sept. 1: Jamie Reynolds. “He’s the pianist in the Core-tet – a 29-year-old wunderkind from Toronto.  Since we play together regularly, we’ll be playing my own compositions at this one.”

There have been, and likely will be, some surprise guest artists, from vocalists to bassists and beyond, on any given evening. Check the Philipstown.info calendar in September for information on performances after the 15th.

The Silver Spoon is located at 125 Main St., Cold Spring. There is no cover charge, and the music lasts from 8 to 11 p.m.  For reservations or more information call 845-265-2525 or visit http://www.silverspooncoldspring.com/
Photos by A. Rooney, except as noted