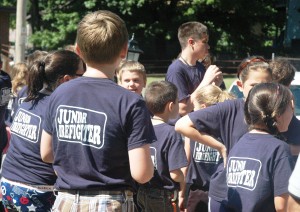 Nearly 50 eager Junior Firefighters picked up their diplomas and rounds of applause on Saturday (July 30) at the graduation of the Cold Spring Junior Firefighter Academy Class of 2011. The youngsters participated in the ninth annual academy, a week-long program blending elements of summer day-camp with rudimentary firefighting skills. Run by Cold Spring Fire Company No. 1 (CSFC) in conjunction with the Town of Philipstown Recreation Department, the free academy draws not only dozens of fourth-through-eighth graders but interest from across the state and region, as other fire departments consider creating similar programs. “Each year it seems to get better,”Dan Valentine, the CSFC member who directs the program told the Junior Firefighters and at least 60 parents, siblings, and friends and supporters during the ceremony, held at the VFW Hall in Cold Spring. “This year they were a really good crew.” He said that the Class of 2011 had 49 members. “It is a lot of kids, but we have a good time.” 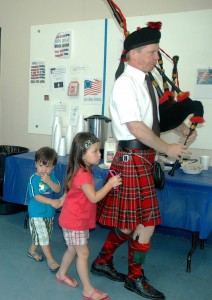 Bagpiper James Hartford leads the procession into the hall.

Before the ceremony, the Junior Firefighters gathered on the small lawn outside the hall, each wearing a dark-blue T-shirt with Junior Firefighter inscribed on the back. As they waited, they variously milled about, perched on the fence, or attempted to organize themselves into firefighter-style ranks. “Can we start lining up?” a young voice pleaded to the CSFC members in charge. “Shirts are all tucked in? one adult firefighter called out. “Shoes are all tied?” another added. Such necessities duly seen to, the group formed into a queue and marched into the hall, behind CSFC members in crisp white shirts, dark slacks, and hats aligned in precision. Bagpiper James Hartford led the way, with lilting tunes, his two young children – potential future Junior Firefighters – clinging to his kilt.

The program included a video of the past week’s activities, distribution of diplomas, and a long list of awards for members of the class. Cake, snacks, and drinks followed. “What a great program,”one parent, Stacey Matson-Zuvic commented as the gathering moved toward the well-laden refreshment tables. Judging from the strong applause throughout the morning, many share that view.
Photos by L.S. Armstrong