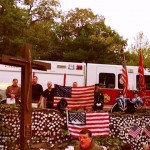 Brother Ted Novak, below, before start of ceremony

Garrison commemorated the tenth anniversary of the airplane attacks of Sept. 11, 2001 with thoughtful ceremony, personal remembrance, artistic expression and high solemnity this past Sunday. High on a hill at Graymoor, the Franciscan Friars of Atonement and the Garrison Volunteer Fire Department (GVFC) held an hour-long ceremony in the permanent 9/11 Memorial Garden on the grounds. The garden is dominated by a large iron cross constructed by members of the Ironworkers Union from material from the Ground Zero site.  The base of the cross contains materials from the site in tribute to the 40 people never recovered from the ruins.

Brother Ted Novak, chaplain of the GVFC, officiated at the event, which was attended by nearly 100 people who held lit candles.  All felt the poignancy as evening fell, especially when Brother Ted asked for silence and the nearby chapel bells peeled “fireman down.”  Father Ken Cienik, a retired U.S. Navy Captain, Chaplain Corps, told the story of being in the Navy Yard across the Potomac River from the Pentagon when the plane hit and then attending to the dead for 48 straight hours. 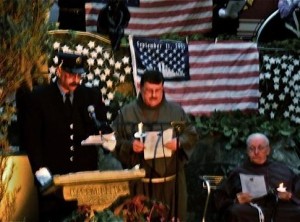 The keynote speaker, introduced by GVFC president Jamie Copeland, was Putnam County Sheriff Donald B. Smith, a retired brigadier general of the U.S. Army. Smith invoked the nation’s founding fathers and Abraham Lincoln, among others, in paying tribute not only to the deceased victims and first responders at the Trade Center, the Pentagon and the plane crash site in Shanksville, PA, but also to the military personnel who have died in Iraq and Afghanistan since 9/11. “Today we pay tribute to the memory of all who lost their lives in freedom’s cause and made the ultimate sacrifice,” said Smith.  (CLICK HERE TO SEE VIDEO EXCERPT OF SPEECH).

The evening air resonated with music appropriate to the occasion. Bagpipers from the Highlands Pipe Band began and ended the event with mournful notes. Dorothy Ferguson sang the national anthem and “God Bless America.”  (CLICK HERE FOR PLAYING OF TAPS).

Earlier in the evening GVFC members gathered at “David’s Garden” named for David Fodor, a Garrison resident and tax accountant, who died in the Trade Center serving as a fire warden for Fiduciary Trust International in the south tower. The members placed a wreath in the garden, also know as a Patriot Garden, located in the northwest corner of the Garrison School’s soccer field at Route 9D and Upper Station Road.
Photos by K.E. Foley