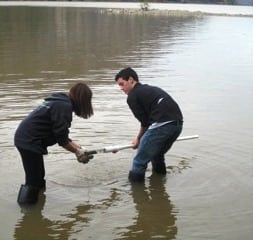 Scientists were at work last week at Garrison’s Landing and at Little Stony Point, inserting empty tubes into the bottom of the Hudson, collecting sediment and releasing that sediment onto a place where it could be examined and deciphered.  The results were carefully recorded by these same scientists, as part of a 70-site field study which took place on one specific “Day in the Life” of the Hudson River last Tuesday, Oct. 18.  The scientists involved were students, not graduate students assisting professors in a M.S. program, but far younger: Garrison 7th graders and the Haldane AP Biology class. The students were amongst about 70 other groups of young scientists taking part in the ninth annual data gathering event, which links over 3,000 students in a field study in which the data they extract and record is compiled and used to assess Hudson River conditions.  This year this data is especially useful because of the damage wrought by Hurricanes Irene and Lee and the resulting changed conditions. 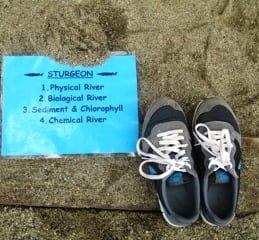 There were four stations to revolve around to

As at other sites, up and down both sides of the Hudson, from the Troy Dam to New York harbor, environmental education centers were paired with local schools to engage in a set group of activities, which produce the data.  Coordinated by the Hudson River Estuary Program of the New York State Department of Environmental Conservation and the Lamont-Doherty Earth Observatory, the procedures were the same at each site, applying identical methodologies throughout.  Each site gathered data according to the provided lesson plans and resource materials and the results are shared. 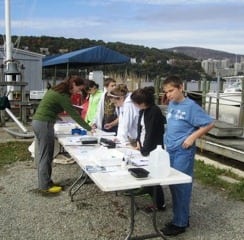 Four stations were set up at each site with students rotating among them. Science teachers Keegan and Patinella rotated between the sites themselves. At the chemistry station at Little Stony Point, Susan Butterfass was helping a group of boys with the tests they were conducting, calculating levels of dissolved oxygen, pH, nutrients and salinity, as well as testing for water temperature and turbidity (cloudiness and muddiness). The students themselves were filling the tubes, swirling them and observing the color changes, linking these changes to what the changes in coloration mean. Butterfass called some of the results interesting, and reflective of the impact of the storms, with lower than usual salinity and “slightly acid pH, which you usually find in freshwater,” (i.e. the influx of the rainwater.)  Butterfass expressed praise for the program, “It’s nice for them to see that people are concerned with the health of the river.” Cathy Bakker had a long table set up on the decks of the Garrison Yacht Club, where students there measured and tested in a similar vein. 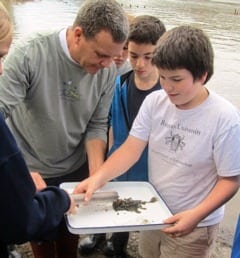 Handling the sediment collection at Garrison

Lisa Mechaley was doing entirely different things with her groups at Little Stony Point.  Making observations about the physical aspects of the river, the goal was to assess the tides, currents and physical interaction between man and the environment. Employing techniques using timing, a floating orange (which was used to determine a measurable line of sight) and pairs of researchers, one standing where the orange started out and the other where it wound up, determinations were made. Students were made aware of how tidal cycles are monitored and how tidal ranges can affect the plants and animals living in the river. Notes were also taken on river traffic. Haldane student A.J. Curto said the program “helps with learning. It’s so good to get out there and do something, not just look at textbooks.  We’re also helping with research so it feels good knowing we can do that.”  Constitution Marsh educator Rebecca Shultz was at the helm of the physical properties station at Garrison’s Landing. 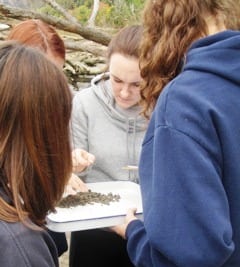 Examining and categorizing the sediment at Stony Point.

Also at the Landing, the kids were really getting into their sediment examination.  Supervised by Sean Bugera, a teacher from Hendrik Hudson High School, and GUFS parent Patty O’Rourke, the collection poles were twisted into the river floor (close to the banks) and then the samples were spilled onto surfaces where students poured over them, determining consistency, and all sorts of factors. Working with a checklist they noted smells, tactile features, (“it’s really gravelly and there are some pebbles, but not many”) and things like slag (broken down metal) and oxidization. The group at Little Stony Point, led by recent college grad and volunteer Ariel Butterfass, was engrossed in the sediment as well.

The seining station was popular at both locales. Haldane’s students, being older, went out into the river (under the guidance of HHLT’s Pete Salmansohn and Haldane parent Jeanne Fitzgerald) with the seining nets and hauled in what the river yielded.  Calling the Hudson “such a diverse place,” Salmonsohn listed White Perch, Hogchoker, Bullhead, Killifish, Darter and Pumpkinseed as among the denizens of the Hudson retrieved on the day. 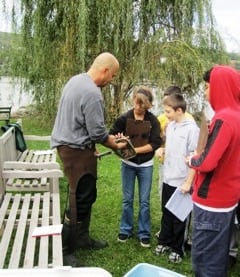 At Garrison, Audubon’s Eric Lind did the honors, assisted by Marsh intern Sarah O’Shea, sharing what he brought in with the seventh graders.  The students identified the fish with the help of guidebooks and the then most of the fish were returned to the river, with the unique ones brought back in fish tanks for further observation. Lind, after delighting the kids with visions of Yellow Perch and eels galore, praised their fish identification skills, “With observation, methodology and the right tools, suddenly you know who is who.  You did great — I’m amazed.”  Lind discussed the variables with the students, “Record carefully.  How long was the net?  It matters, and where we go matters — for instance we caught vastly different numbers of fish between the first and second groups. The first group had lower tides and we could get out further. That affects the catch.  Being through it twice affects the catch, as does the net itself. The net is our stocking; it’s sometimes full of shiny toys — the fish, the gift of the river — sometimes you get nothing.  That’s the mystery and the fun.”

For more details on the program, visit  this website.